This is the second installment in my Inherited Secrets blog series, which talks about connections and shared plot elements in the various Inherited Stars Series books. My last blog was titled Blame it on Dartis. Today I take a closer look at a man called Jaeo.

Jaeo Gant is an important character in both StarDog and Inherit the Stars. (His first name is pronounced Jay-oh.) He is a mature, fair-haired and fit, with a sometimes domineering personality, often mistaken for a man much younger than his 45-ish years.

In Inherit the Stars, Commodore/Captain Jaeo Gant is introduced as a bit of a presumed-rival-turned-foil of the hero, Sair. Sair is a Rathskian who was enslaved by Ithis as part of a treaty between the two allies. But he escaped and is now on the run.

As fate would have it, the ship that Sair makes his escape on is none other than Specter. And as the popular saying goes, "The rest is history." Specter is a very special high-tech prototype designed by Zaviar Mennelsohn, and is central to the plot of Inherit the Stars as well as making a significant cameo in StarDog.

Jaeo's animosity toward Sair is deep-rooted. Something happened a year before Inherit the Stars story opens that tore Jaeo's life apart and put him at odds with the Ithian Alliance--and vice versa.

His animosity toward the Alliance goes double for Rathskians--who make up one half of the Alliance. So his immediate reaction toward Sair is one of bone-deep mistrust and suspicion.

StarDog takes place six moons (months) before Inherit the Stars, and so in reference also just six months after that tragic incident in Jaeo's life took place. He's a man still reeling from both the incident and the aftermath. Though a brief description of what happened is mentioned as part of Jaeo's history in Inherit the Stars, it has much more to do with the plot of StarDog.

From Inherit the Stars

Sair carried the freight lading device to the kitchen manager, passing by the door to the main room of the lounge. Words of a conversation filtered into the kitchen from a pair seated at the bar. “…it was the cap’s wife. Rathski’ns took her apart with laze-saws. Happened last calendar. On his old ship.” 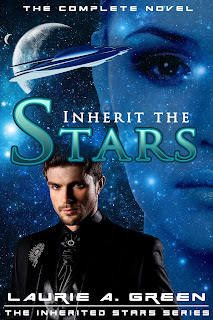 Sair held his breath, straining to hear more over the din of voices, sliding chairs, and shuffling feet. He angled his right ear toward the door, concentrating.

“Damn Rathski’n wreckface bastards,” another man snarled. A tankard was brought down on the bar with a loud thud. “Why’d they do her, then?”

“Somethin’ about the Wisdom’s cap refusin’ a board. Teach ‘im a lesson.”

Jaeo is also very suspicious of Tectolian hero Taro Shall in StarDog, because he immediately suspects Taro is hiding an important bit of information. Jaeo's instincts are dead-on. Taro is hiding something, and what he conceals puts the two men at odds.

From StarDog (Pets in Space):

“Answer me, Mr. Shall, or I’ll have no choice but to call in my interrogator,” Gant warned. “Believe me when I tell you, you want to avoid that.” 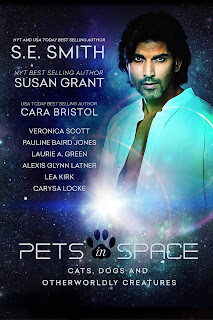 “Why does it matter to you how she got here?”

“There is no plot,” Taro said flatly.

“Then why don’t you just tell me the truth?”

Taro’s hands tightened into fists. “Because it’s none of your business.”

Gant stiffened, moving to stand over Taro. “Believe me, it is my business."

In spite of his penchant for getting off on the wrong foot with the heroes, Jaeo is destined to be a hero in his own story, tentatively titled The Crucible. This novella will fall after Inherit the Stars in the timeline, but before Inherit the Vengeance--another full length novel in the series. He'll also play a role in another planned Inherited Stars story with the working titled of Honor and Duty.

That's a lot to absorb, so let me sort that out visually:

The Crucible (WIP) -- Jaeo's story. Takes place in the aftermath of Inherit the Stars

Honor and Duty (WIP) -- Begins a few calendars after The Crucible. Jaeo is important to the story.

Inherit the Vengeance -- Begins with a wedding seven calendars after Inherit the Stars. Jaeo will play an important role in the story, which includes a resolution to events in StarDog, and a shocking reveal about what took place when the Rathskians boarded his ship.

So it's quiz time. As with our last quiz, there may be a prize for a random commenter who provides the correct answer.

For those who've read either StarDog and Inherit the Stars, something important about Jaeo's background is revealed in both stories:

Jaeo Gant is an assumed name. What is Jaeo's actual last name? (And for bonus points, why is it important?)
Posted by L. A. Green at 5:00 AM