So Why Do We Celebrate Anyway?

I think it's always fun to do a little refresher on why a holiday exists and what it's really all about for those of us here in North America. It's true that for many the focus of Thanksgiving is that delicious turkey dinner with all the wonderful trimmings (Yum!) and good times spent with family and friends--and that's certainly a big part of the tradition.

But the first Thanksgiving was a very different experience.

A small sailing vessel named the Mayflower left Plymouth, England in September 1620 carrying 102 passengers and a crew of 26. Most were Separatists, who later became known as the Pilgrims (or the Pilgrim Fathers), those seeking a new home to freely practice their faith. But others were drawn to the New World by the prospect of land ownership and prosperity. Miles Standish, who would later become their military leader, was actually a soldier hired for protection against hostile natives.

The voyage was not easy. In cramped, uncomfortable conditions in the crowded vessel, and in often dangerous weather, their trip lasted 66 days--or more than two months.

They finally dropped anchor near Cape Cod, Massachusetts in the area of what is now Provincetown. However, their actual destination had been the mouth of the Hudson River, further to the south, where they hoped to find fertile farmlands just north of what is now New York City. The storms had been so severe on the crossing that they were blown off course and forced to abandoned their plans. A month later, they sailed around the Massachusetts Bay to a site where they started to build a village that would later be named Plymouth, Massachusetts.

Some accounts claim the Pilgrims didn't actually name Plymouth after the town they set sail from. In fact, they didn't name it at all. The area had already been named Plymouth--or Plimouth, spellings varied--by explorers who had drawn maps of the territory that their captain most likely used on the voyage. They simple adopted the name already given to the location.

By the way, the Pilgrims never mentioned Plymouth Rock either, which has for so long been considered a part of their history. The landmark glacial boulder was actually first documented as their landing site by Elder Thomas Faunce in 1741, more than 120 years after the Pilgrims arrived.

The first winter was so harsh that most of the pilgrims remained on the Mayflower for shelter, where the poor conditions led to scurvy and epidemics. Nearly half those onboard perished before spring arrived. Only four adult woman survived to the fall.

Here's a quick-paced video from the History Channel that gives some eye-opening details about this historic voyage. (Psst. Guess who some of their more modern descendants were.)

When the survivors went ashore, they were met with a surprise. They encountered Samoset, an Abenaki Native American--who spoke to them in English! He had learned the language from some English fishermen in Maine. 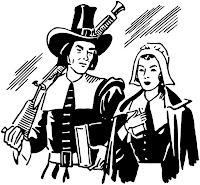 Days later, Samoset returned with Squanto, another Native America and member of the Pawtuxet tribe. Squanto had been captured by an English sea captain and sold into slavery in Europe. He later escaped from London and returned to his homeland with an expedition to explore New England. His Pawtuxet tribe had been wiped out by smallpox.

This former slave taught the starving Pilgrims how to grow food like corn, how to get sap from maple trees for syrup and how to fish. He was essential in helping the settlers form a relationship with a nearby tribe called the Wampanoag. (They were Algonquian-speaking, as was one of my ancestors if our family history is true.) This alliance would last for more than half a century, and even more notably, it's one of the few known examples of peaceful coexistence between the native peoples and the European colonists.

Thanks to Squanto, by November of 1621, the Pilgrims had reaped a successful harvest. The new governor, William Bradford, called for a celebration in the form of a feast in which they invited their new allies, including members of the Wampanoag tribe and their chief. 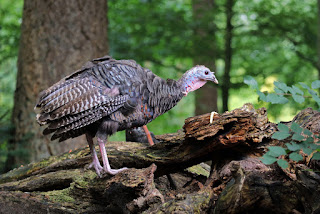 No one knows exactly what was eaten at this feast of thanks, but notes in pilgrim Edward Winslow's journal said that four men were sent "a-fowling," possibly for wild turkey and waterfowl. He also noted that the Wampanoag brought five deer to the gathering. It is generally believed that geese, ducks, clams, squash, pumpkin, barley, beans, corn, walnuts, chestnuts, wild cranberries and currants were on hand, and more exotic fare might have included lobster, seal and swan! The Pilgrims had no ovens and a limited sugar supply, so there were most likely no pies, cakes or desserts included. Even so, the three-day gathering to give thanks to God for a successful harvest was so popular that it inspired annual celebrations for more than two centuries in the colonies.

Not until 1863 -- some 242 years later -- did President Abraham Lincoln, in the throes of the Civil War, proclaim Thanksgiving be a national observance to be held each November.

I love how the spirit of the first Thanksgiving has now been carried forward for more than three centuries. Three years from now will mark the quadricentennial of that first feast! And it's still all about giving thanks for all that we have, and sharing our bounty with others who are in need. 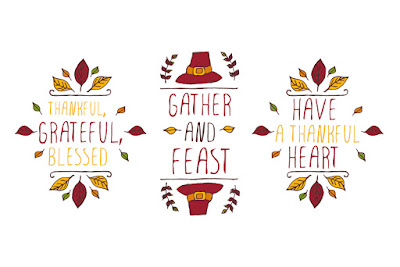 Wishing you and yours
the wonderful spirit of sharing and caring
as we enter this holiday season.