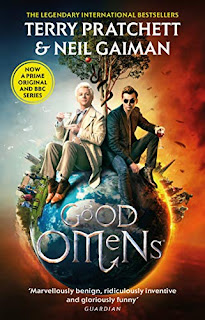 Terry Pratchett and Neil Gaiman's book, Good Omens, isn't SF and it doesn't have much in the way or romance – but I'm going to talk about it anyway. We first started to hear rumours of a movie of the book a year or two ago, saw the trailer, and then heard the release would be on 31st May 2019.

Fingers trembling, I entered the date into my online calendar. On the day, I signed up for Amazon Prime for no other reason than to see this series. And I have to tell you, I was not disappointed. No, not one bit. It is fantastic.

According to The Nice and Accurate Prophecies of Agnes Nutter, Witch (the world's only completely accurate book of prophecies, written in 1655, before she exploded), the world will end on a Saturday. Next Saturday, in fact. Just before dinner.

So the armies of Good and Evil are amassing, Atlantis is rising, frogs are falling, tempers are flaring. Everything appears to be going according to Divine Plan. Except a somewhat fussy angel and a fast-living demon—both of whom have lived amongst Earth's mortals since The Beginning and have grown rather fond of the lifestyle—are not actually looking forward to the coming Rapture.

And someone seems to have misplaced the Antichrist . . .

I'm not precious about movie adaptations of books. Some people get their knickers in a knot if the screen play is not exactly the same as the novel. Me, I think we're talking different media with different requirements. Besides, the small differences between the original 1990 book (which I own in hardback and have read multiple times) and the series do not in any way detract from the story. In fact, they improve it. For those interested, here's an article to explain the differences. Be warned, HERE BE SPOILERS.

Some changesjust had to happen. The book was written before 1990 so the whole thing with cell phones and selfies wasn't even a twinkle in anybody's eye. The tech in the movie has been updated – with even a reference that demon Crowley invented selfies. Hmmm. Selfies as a demonic device? Could be.

I'm glad the book was made into a series, not a single movie. The complex plot doesn't have to be crammed into (at best) three hours. Gaiman, who wrote the screen play, had room to realise his (and Pratchett's) vision. The series includes much more background information about Heaven and Hell – and it's apparent they are both equal opportunity employers. While Archangel Gabriel is the embodiment of an American corporate with a penchant for jogging and The Sound of Music, both Lord Beelzebub and Archangel Michael are (I think) female, although they come across as a bit androgynous. Oh - and I must add, the entity in the TOP Job - you know, G-O-D - is a woman. Heaven is depicted as a light, bright, white corporate building with soaring ceilings and no personality, Hell is the basement; dirty, crowded, and unhealthy. But as the story progresses, I found myself wondering if there really is that much difference between the two sides.

There's much more in the series about how Aziraphale and Crowley got their jobs on Earth from first events in the Garden of Eden, and how their relationship developed over the centuries, which helps to make them more real as well as raising some question about the Ineffable Grand Plan. In the supernatural corporate world, these two are well down the pecking order and are normally completely ignored by their respective head offices as long as the normal reports are filed. Michael Sheen and David Tennant simply own the parts – and obviously had a wonderful time making the series.

There's a certain Monty Pythonesque feel to the titles which I expect wasn't a coincidence.

So much more could be written but I risk spoilers so I'll stop now. I repeat, I loved the series and will watch it again. And I am absolutely delighted to discover that there's every chance of a second series.

In an entirely appropriate gesture to the late Sir Terry Pratchett, it seems an empty seat was left at the premiere. I hope Sir Terry enjoyed the show as much as I did.