The Morgan's Misfits Collection is here 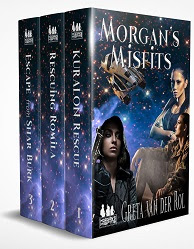 I confess I'm finding it hard to get into the writing of a new book. I keep threatening to write a sequel to For the Greater Good (Puss in space) but while I have some starter ideas, it's not enough for a whole book, so the plot is simmering on the back burner until I have a Eureka! moment. We can live in hope.

Meanwhile, I had some fun designing a cover for a collection of the three Morgan's Misfits books. It's out there now, costing rather less than if you buy the three novels individually.

All three Morgan’s Misfits adventures in one volume.

Morgan’s Misfits – Jirra, a Hasta ex-Fleet engineer who's in love with the wrong man, Chet, a Mirka who was a detective and has been exiled, and Toreni, an elite Shuba trooper who'd rather be a chef. It’s an unlikely alliance of women who don’t quite fit into the rigid caste system of their society.

Working with Morgan Selwood, they embark on dangerous adventures to help Fleet in its fight against enemies of the Union. Success demands more than team work. They’ll have to jettison their own prejudices and forge relationships free of the rules and caste lines that dominate ordinary social mores.

And navigate the uncharted space lanes of romance.

NOTE: All three books have been published individually

Buy the books at: Amazon B&N iBooks Kobo
Posted by Greta at 12:00 AM