In my last three blog posts, we discussed Building Character: How to Bring People (and Aliens) to Life Through Words. You can find Part 1 here, Part 2 here and Part 3 here. This month, I thought I’d share a characterization game my daughter and I used to play. 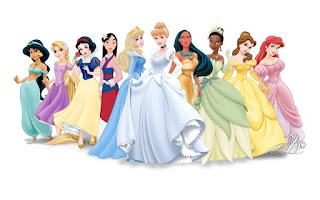 A few years back my daughter (now 20) came to me with a list of Disney princess movies she used to watch over and over when she was younger, and asked me to list my favorite princesses in order from most favorite to least favorite. What my writer brain heard was, "Which heroines do you like the best and why?" We each put them in our desired order and then shared and discussed our lists. Then we did the same for the Disney heroes, the Disney villains--which was an interesting discussion about what makes a villain enjoyable to watch--and then she surprised me with wanting to list the sidekicks in order.

Hmm...first we had to decide who the sidekicks were. Disney movies tend to have a bunch of them. For example in The Little Mermaid, Ariel has Flounder, Scuttle (the seagull), and Sebastian the crab. This got us into a fun conversation about sidekick characters and mentor characters. The writer in me was totally geeking out! After explaining what a mentor was, we decided that Flounder was Ariel's friend-sidekick and Sebastian was her mentor-sidekick. In Cinderella, Jacques and Gus are Cinderella's sidekicks while Fairy Godmother is her mentor.

This game was fun for a number of reasons. The writer in me enjoyed talking about what made good heroes, heroines, villains, and sidekicks. The mom in me enjoyed learning more about my daughter and why she liked certain characters over others.

I challenge you to play this game at home with your family or maybe with your writer friends. You don’t have to use Disney princesses. Why not make a list of 8-10 starship captains? For example, in no particular order…

The catch is that you cannot simply list the characters in the order you like best. That's too easy. You must discuss the reason WHY you chose one over another. You'll learn more about each other, plus, if you're a writer, it's a fun way to discuss something you love--characterization--without boring your family.

So who was my favorite Disney heroine? Well, it was a toss up between my two favorites: Beauty and the Beast's Belle and Mulan. Belle is adventurous. She sacrifices herself to save her father (very heroic). She stands up to the beast (a pretty kick-butt thing to do). And she loves to read!

Mulan is not a princess. She's better. She's the hero of China! She pretends to be a man to save her elderly father from going to war (again heroic). She trains hard in the martial arts and fights the Huns (very kick-butt). She uses her wits to solve problems (smart heroines are awesome).

But there can only be one winner. I chose Belle over Mulan because, like me, she loves books. :)

Snow White - a woman happy to cook and clean for seven men. Is she crazy? I can't relate.

If you'd like to play this game in the comments section, these are the nine Disney "Princess" movies we used: Snow White, Cinderella, Sleeping Beauty, The Little Mermaid, Beauty and the Beast, Aladdin, Pocahontas, Mulan, and Tangled.

Or play using the starship captains named above.

Or feel free to make your own list and tell us about it in the comments.

Stay safe out there,