Filtering a lifetime of science fiction through a romance lens.

Hi! I’m Krista Luna. One of my earliest memories is of watching Star Trek and wanting to kiss Mr. Spock. Soon after, I saw the original Star Wars movie and fell in love with the charming scoundrel Han Solo. I’ve been a science fiction fan ever since. While I wait for a hot alien to whisk me away on his spaceship, I write fun and sexy stories full of growly alien warriors and smart, capable women. There’s steamy romance, action and adventure, and plenty of HEAs.

I also read a lot of classical science fiction from the big names in the genre. The series that really resonated for me as a teen and continues to echo to this very day is Anne McCaffrey’s Dragonriders of Pern. They weren’t romance books, per se, but there was action, a strange planet to explore, adorable alien pets, and couples finding love after being forced together by circumstances. My science fiction romance series, the Fated Mates of the Varool, incorporates all of these elements.

The urban fantasy genre has also been an inspiration, such as Ilona Andrews’ Kate Daniels series. I admire strong women, who play a major role in the plot beyond their romantic interests. And I love the traditional alpha male—a warrior and a leader ready to put his life on the line to protect his people. Bossy and arrogant without being an “alphahole,” these are the types of alpha warriors I write.

The reboot of Battlestar Galactica was another big influence on this series. I wanted to explore the idea of two peoples who’ve almost gone to war being forced to learn how to work together to have any hope of a future. So the foundation of the first books in my series is enemies to lovers, where they really have been enemies.

As in BSG, I also wanted my humans to be less than squeaky clean. They’re desperate. They fled Earth a few centuries ago on generational ships that are now broken down. When they finally find a habitable planet, they’re on their last legs. So when the technologically advanced Varool show up, the humans are willing to do almost anything to secure the planet for themselves. The consequences of those actions come to a head for all of humanity and specifically for the heroine, Deirdre, in book one, Possessed by the Alien King.

The foundation of book one is a political marriage to seal a peace treaty between humans and Varool, but things begin to go wrong almost immediately. Deirdre and Storr, the alien king, are shot down. When their shuttle crash lands on the untamed alien planet, they both need to survive to keep the peace treaty intact. I love writing fun, face-paced stories where the action pushes the couple together as they learn about each other’s strength of character and to trust each other.

My favorite science fiction stories always have really strong ties between the main characters. I love the emotions and connections romance allows you to explore, as well as the joy of fated mates finding their HEA. I think we could all use a little more joy. 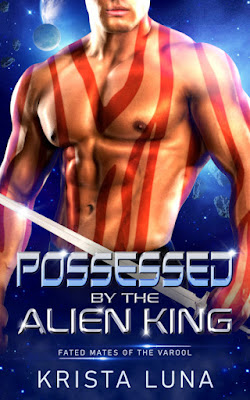 My fated mate is my enemy. Yet nothing will stop me from claiming her.

I made a horrible mistake. Under orders, I created a virus to drive the Varool from humanity’s new planet. It mutated, killing all of the alien women and our men.

Now, the fate of both our species rests on my shoulders—and between my thighs. To ease my guilt and broker peace, I’ll marry one of the fierce alien warriors and bear his children. All while hiding who I really am.

Their brute of a king claims me, his gigantic body inflaming my desire. Storr’s piercing gaze makes me shiver. If he ever finds out the part I played in all of this, crash landing on the planet will be the least of my worries.

Humans seized the planet I need for my people. As negotiations deteriorated, varoolian women died. I long for retribution. If I ever find the person responsible—

No. I must set aside my fury to secure my people’s future. Survival demands we reproduce with the enemy.

Although I have no plans to be first, a sweet, musky scent ensnares my senses. Deirdre is my fated mate. I must claim her. She is mine.

Yet consummation does not equal trust. As we battle our way across the untamed planet, suspicions mount. All humans are liars, but Deirdre’s lies may end us both.

Possessed by the Alien King is a steamy enemies-to-lovers romance featuring a growly alien hero, a smart heroine, and plenty of adventure with a guaranteed HEA.

It’s available at Amazon, where you can also read the opening chapters by clicking on the “Look Inside.”
And you can find Possessed by the Alien Guard, my free prequel novella by clicking here.

Thanks so much to Laurie and the other wonderful authors here for letting me join you today. If you like action romance, alpha warriors, strong women, and adorable alien pets, there are four novels available in the series, as well as a free prequel novella. I’m currently finishing book five and can’t wait to share the expansion of this universe! 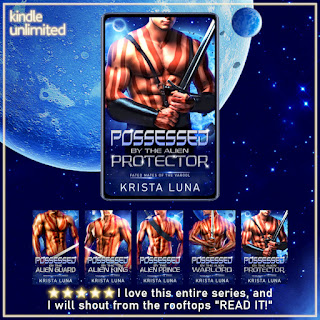