Welcome! If you're just finding this serialized version of my aquatic SFR, The Shell and the Star, you can catch up on all parts posted to date by clicking here.

Last week, we left Trey and Jinn as they were just about to go, well...skinny dipping!

After watching the Perling in their Boggy Ball attire (none), Jinn wanted to know what it felt like to swim nude in the Veros ocean. And that led to a questioning Trey and an admission of trust on her part.

For those who are following the story, hope you're ready to "dive into" today's episode. :)

Together they swam—naked, free—among the rocks and the sea fans. And it was glorious! The water caressed her skin as if it were liquid silk. Her hair streamed behind her, curling around her body like golden smoke when she stopped or changed direction. And Trey swam with her, beside her—beautiful and bare—only touching her with his eyes.

Now she would not only be able to tell her friends on Talstar that she’d swam in the oceans of Veros, but that she’d done so naked! And with one who had bid for her hand.

But by that thought, was her subconscious telling her she would return to her home?

Or did it signal her desire to stay here with Trey among the Perling?

A life with Trey wouldn’t be easy for her. She hadn’t grown up in the ocean as he had. And the envirosphere would only last a few days before her haven was spent. She also knew Talstar had neither the time nor the logistics to dispense a new charged unit every few days.

No, once her decision was made, she’d be committed to live her life in and under the water. After she’d nearly drowned herself a short time ago, that was a sobering thought. Trey might not be there to save her next time. He couldn’t live every moment of his life at her side.

Could he possibly live on Talstar?

She spared a look at her beautiful water warrior. She sensed he would go if she asked it, but could he ever be happy in the starkness that was Talstar after living his life in this warm and vibrant sea among his own kind?

She needed more time to answer his bid. Could she come to a decision in another day? Or would she return to Talstar without giving her response? Could she do that to Trey? Leave with his bid unanswered? Make him wait?—more days, more nights—for her decision? She knew it would be a cruelty and his feelings now mattered to her. Very much.

Was she already falling in love?

She felt the brush of his hand against hers and turned with a stroke of her palm to face him. He reached out, threading his fingers through hers and urging her closer. 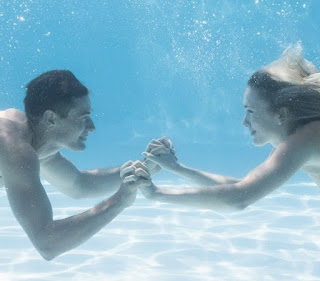 There, coming to rest on their knees on the sandy bottom, they shared their second kiss…and their first naked embrace.

Trey pointed to the surface, and again took her hands in his. Together, as one, they rose.

Once at the surface, he pointed to the ledge. “I think we should talk.”

“Yes.” Jinn bit her lip and nodded, following him. She wasn’t ready to give him her answer that moment, but she understood there were things they both needed to say.

He lifted her onto the ledge and joined her there, and now, out of the water, Jinn felt suddenly exposed. Indecent.

She reached for her discarded dress and he took the prompt, rewrapping his black and gold swimkilt while she dressed.

“There’s something I’ve been wanting to show you, Jinn. Something you need to see. Would you—”

The wind brought sounds of the players’ voices again—this time frantic, shrill, shouts of panic. Trey turned his head toward the cove entrance, frowning. He shot to his feet and angled his ear to the sounds, before turning to her. “Wait right here.”

In a graceful arc, he launched his body out over the water and disappeared beneath the waves.

This segment marks the halfway point in the book. Jinn and Trey have come a long way in a short while -- but are they be ready to face what comes next?

I'll be back next Monday with Part 20 of The Shell and the Star.