Love and War in SFR

The ancient Greeks believed love and war were virtually the same, two pursuits driven by passion. In mythology, Aphrodite was the Greek goddess of love and Ares was the god of war. Though not married, these two were often found paired, the embodiment of Love and War.

Science Fiction Romance stories are often rooted in historical events and folklore, and love and war have been constant bedfellows (excuse the pun) throughout the ages. 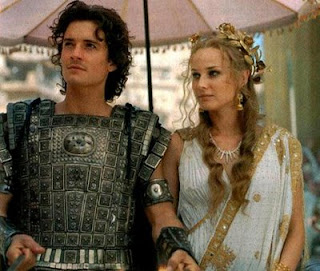 Helen of Troy had “the face that could launch a thousand ships.” In the effort to possess her, her suitors waged a fierce battle that resulted in the downfall of Troy. (And, oh yes. There’s something about a horse in that story somewhere, too. *smirk*) Science Fiction Romance often draws on elements of Helen of Troy--the waging of war for love. Most wars, in either fiction or reality are fought for one of two reasons—the quest for power or the quest for love.

Another way love and war are linked is by paralleling the conflict between a couple with the conflict of the battle itself. In Lord of the Rings (the film version, at least) Aragorn and Arwen Evenstar struggle with their differences—he, a mortal man and she, an immortal elf—and what a future together would mean for them and those they care about. Arwen must decide whether to chose a mortal life or remain with her immortal family. At the same time, their two races wrestle with an uneasy alliance. Should elves join men in the armegeddon of Middle Earth, or avoid war and go in peace to the Undying Lands?

In the Science Fantasy mythos created by Star Wars, a love triangle is set up between rebel leader Princess Leia, young Jedi heir-apparent Luke Skywalker, and rogue captain, Han Solo. As the story evolved, the audience discovered that Luke and Leia were twin siblings. The relationships between the three main characters represent the two major elements of love—love of mate and love of family—within the context of a galactic rebellion.

Love and war can be used effectively in a Science Fiction Romance by giving the reader a stake in the plight of the characters. Understanding what drives a character to react or rebel brings them to life, and what better way to show their strengths and weaknesses than to subject them to a turbulent love affair or a war that threatens their lives and the existence of everything they believe in.
Posted by L. A. Green at 4:00 AM