Spacefreighters Lounge is very happy to host guest blogger Jenna McCormick today for the last stop on her NO LIMITS Blog Tour. NO LIMITS is an exciting new SFR/erotica novel published by Kensington and available in print and digital formats.

Congratulations on your exciting new release, Jenna, and welcome to Spacefreighters Lounge!

A Win for All of Us
Jenna McCormick

Thanks so much to Laurie Green for hosting me! I’m a big believer in teamwork. Though I’m an introvert by nature, I believe success depends not just on the hard work of one person but having a great network of people who can pump you up when you’re about to drop and cheer you on when you succeed.

When I first sold No Limits, to Kensington last February, my thoughts went something like, holy Terellian Tuesday, Batman! They bought my freaking nano (National Novel writing month) book! And then I had to get right down to work rewriting that book, because it was, after all a nano book. Characters dissolved into the veil, and other’s changed in all but name. And when I finally had thirty seconds to think about something other than gutting the book, I thought, this is wicked awesome for the sci fi romance community.

Having another SFR novel out there is bigger than having just my book published. It’s a well-executed strike in favor of SFR readers worldwide who are looking for a new book to read. It’s hope for that struggling SFR writer who sees the announcement that my futuristic erotic romance was bought by Kensington and pushes through the doubt to finish her own novel. And it’s even a bridge to maybe induct a few more readers who wouldn’t necessarily pick up an SFR, but maybe, just maybe, enjoys the heck out of it and then starts looking for more like it. Which leads to more sales of SFR books already out there, which leads to more contracts offered to SFR writers and on and on it goes.

Okay, so I’m an idealistic sap, but those were my thoughts. I’m excited— no ecstatic—when I hear about another SFR sale, no matter who the publisher because it truly is a win for us all. It’s why I’m going all out for this blog tour and pushing this book like an Intergalactic Pimp. So I can sell another and so I can read a bunch more. Spread the word, SFR is the wave of the future and we should celebrate every victory together! 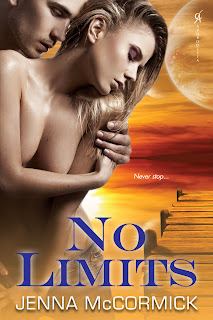 No Limits
Jenna McCormick
Now Available for Kindle, Nook, and wherever books are sold.

All Genevieve Luzon wants is to be loved by one man, a seemingly impossible task in New-New York City at the start of the twenty second century. Sure, she can buy sex as easily as order a pizza on a Friday night, but finding a forever kind of love among her self-centered peers is no easy feat for the unemployed off-world vacation coordinator. When an old friend offers her the position of secret shopper to test out the male prostitutes, Gen can’t think of a good reason to refuse. Hell, if she can’t find Mr. Right, she might as well try on a sampler of Mr. Right Nows.

Yet the perks of her new position don’t compare to the strange attraction she has, not for one of the prostitutes, but a candle that seems to warm places of her she never knew existed. When a man appears out of the flame, Gen is sure she's found the one. Rhys is an empath, made a slave by the Illustra Corporation and he’s everything Gen could ever want. Except available. Because Rhys is on a mission. One that might claim his life. He must try to free his people, consequences be damned. Now, Gen must choose between turning her back on the only man she’s ever loved and the monumental task he has set for himself. Should she risk her life fighting a war hidden from polite society against those who wish to control us all?

Is love really worth fighting for?

I’ll give away one ebook copy of no limits (Kindle, Nook) to a random commenter. And join me for the No Limits Blog Tour and a chance to win a KINDLE FIRE!