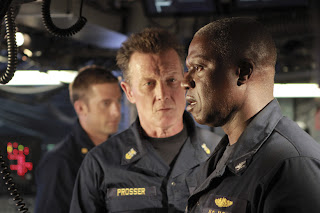 The men (and women, theoretically) who command our nuclear attack submarines are chosen not only for their intelligence, bravery, demonstrated leadership abilities and experience in the position of command, but for a very specific set of psychological qualities.

These commanders must be able act with complete independence on long voyages far from any other sources of authority, and yet they must be depended upon to follow their orders without a second’s hesitation. Even if, especially if, those orders require the unleashing of weapons of mass destruction that would mean the deaths of thousands of human beings, if not the end of the world as we know it.

Andre Braugher portrays such a man, Captain Marcus Chaplin of the U.S. ballistic missile submarine Colorado, in ABC’s new futuristic military thriller LAST RESORT. Captain Chaplin receives the order to fire his missiles at targets in Pakistan in the middle of what is otherwise a routine tour of duty. Sure, things are politically a little rough back home, what with the president under some vague threat of impeachment and military leaders resigning in protest of something (information the viewer is given obliquely through news broadcasts running in the background). But there has been no escalation of defcon status; there’s no alert ahead of the order. Most importantly, the order comes through an alternate channel, through a station at the Antarctic meant to be used only in the event Washington, D.C. has been destroyed by enemy attack.

Midway through complying with the order to fire, Chaplin pulls back. He seeks confirmation that D.C. has been destroyed. Nope, the afternoon talk shows are still merrily broadcasting. The captain, confused, asks for confirmation of his orders from Washington, where they should have come from in the first place. He gets told in no uncertain terms to fire his missiles, but the order does not come from the Secretary of Defense or the President, and they still won’t tell him why the original orders came through a secondary channel. When he continues to ask for clarification, he’s removed from command and his Executive Officer is given the order to fire. When they won’t answer the XO's questions, either, other U.S. Navy ships in the area begin to fire on the sub, damaging it.

Within moments, two nuclear missiles are fired from another location into Pakistan, killing thousands, and the Colorado’s captain is forced to use an experimental defensive shield onboard his boat to hide from his own Navy and escape to a nearby island. There the conflicts for the series are set up: the captain and his crew against the mysterious forces that ordered the attack on Pakistan and now want them out of the way; the internal conflicts between the members of the crew that support Chaplin’s decision (the faithful XO, played by Scott Speedman, and others) and those that don’t (led by the always-hateful Robert Patrick); the criminal elements and the NATO monitoring station staff on the island who each have their own reasons for wanting the sub gone; and maneuvering behind the scenes back in Washington.

Much of this LOST-meets-FAILSAFE premise would seem too unlikely to survive network television without the grounding presence of Andre Braugher in the lead role. The show’s producers, Shawn Ryan (THE SHIELD), Karl Gajdusek (DEAD LIKE ME), Marney Hochman (THE CHICAGO CODE), have so far wisely let Braugher carry the emotional weight of the show, focusing on the relationships between the captain and his crew. Braugher, as always, rivets our attention every second he’s on the screen. We have no trouble believing in his every action, from the first moment. He’s crucial to selling the premise, because we can believe his Captain Chaplin would make the decisions he makes.

Robert Patrick is certainly up to the challenge of foil in his role of Master Chief Joseph Prosser, a loyal sailor opposed to the actions of his captain. But it remains to be seen whether the younger actors (Scott Speedman, Daisy Betts, and especially Autumn Reeser as the fast-talking, nearly inexplicable character Kylie Sinclair) can run with the big dogs. If the actors can make us believe in their characters and the ties they all have to each other as members of a crew, we might be willing to forgive a plot that pushes the envelope of believability.

Spectacular News!
This message comes to you direct from Cloud Nine where I’ve been since I received an offer of representation from Michelle Johnson of the Corvisiero Literary Agency of New York. We signed the contract yesterday, so it’s official: I have an agent! Believe me, I haven’t slept for two nights, I’ve been so excited!

Michelle made her offer based on a reading of my science fiction romance novel Unchained Memory. This is how she described her reaction to her colleagues at the agency when she announced she’d taken me on: “When I read her sample pages, I had to wait fifteen minutes before requesting her full because my hands were shaking so much - and the manuscript was just as incredible.” Gotta love that!

Her colleagues were very warm in welcoming me to the agency, sending me little emails to say they were happy to have me on board. That was completely unexpected, but they all made me feel a part of the team right away. Am I gushing?

Not to get too deep, but there’s a more spiritual message here, too. Michelle’s offer marks the second time this year that something wonderful has happened just as I was poised to give up and settle for less than what I’ve been working for all these years. The first time was in March. I became a Double Finalist in the 2012 RWA® Golden Heart® contest just as I was preparing my manuscripts for submission to a noted e-publisher, having given up on ever getting an agent and a path to the traditional print publishers. 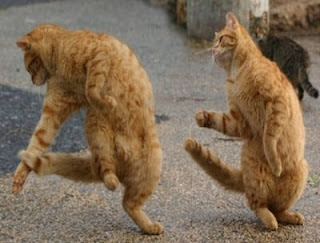 Now, seven months past Golden Heart and many rejections later, I had just two options left and was ready to give up hope again when Michelle came through, full of fresh enthusiasm and a genuine love of my work. So the message the universe is giving me is: Never Give Up!

Let me pass that on to you, if you need it. Don’t give up. Never give up. Just when you think it will never happen, it just might.

Now, come on, everybody. Do the happy dance with me!