Health Care of the Future: Guest Blog by A.R. Norris 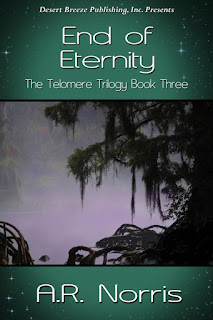 Diagnosing, treating, monitoring, all of it interests me. Maybe it's because my day job is researching all the cool advancements in the healthcare field. It's really fun to read a report or research study on a new technology or approach and then sit back and imagine what it will become in 50 or 100 years.

Most of these little tidbits I put into my blog on posts I call Science Update. It's an inconsistent post series, depending on what I find that's interesting. Now, in The Telomere Trilogy one of the main characters is a doctor, and gave me a great opportunity to include more of my ideas in my writing than usual.

Some of my favorites included in the story?

Portable Imaging Unit
This neato gadget fits in a med bag when the medical team is in the field. It folds out into a wand, ran over the injured part of the body and reads like a 3D CT scan.

Body Tome
This is a stationary chamber is similar to the MRI machine, but not only does it screen and diagnose the problem, it can do autonomous robotic surgery repair what's broken or torn. As it scans, a smaller 3D holographic form of the person materializes and highlights their injury points and recommends treatment or surgery. 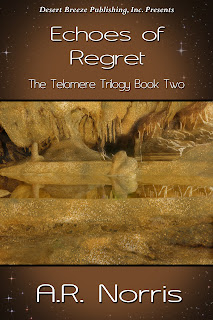 Regeneration Treatment Chamber
For those things that are not broken, torn or otherwise obliterated, there's the regeneration chamber. The injured person lies in a tank of liquid medication that reacts to electric currents and special lighting to heal the wounds, bruises and infections.

Those are some of the big technologies, but there's also smaller things like  gel pads that when activated will stem blood flow and antiseptic spray with nano treating technology to sterilize and then prep wound edges for surgery by dissolving the damaged edges.

"Okay, breath A. R., breath." Sorry all, my geekfest ran away from me a little. Let me just include a short excerpt and call it a day. Of course, one commenter will win the first book in the trilogy, Revelations of Tomorrow. And if anyone wants to like my Facebook Fan Page (link below), they can enter an opportunity to win the whole trilogy.

Excerpt:
"Get him on the bed." She pulled the bed scanner from the ceiling and ran it across him from head to toe, then moved to his miniature image on the screen, on the bedrail's patient network system. "Severe lung damage, at least one tear... here." She made a mark. "Several broken bones along the rib and hip bones. Dislocated shoulder and serious bruising, well, all over." 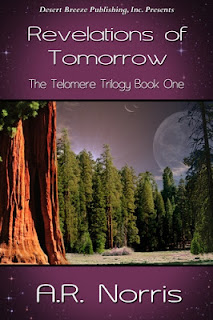 She pushed the scanner up into its ceiling carriage. Gripping the small image, she turned it, eyeing his damages from all angles. She entered her treatment plan and sequence. "Get him in as soon as possible--"

He stirred and woke with a start. Trying to sit up, he cursed and rolled. She grabbed his upper body to prevent him from falling and his steely green eyes focused and glared.

"Telomere bitch." It was an injured whisper, but said with such venom Brenda flinched. "Don't touch me. I won't have you touching me."

"Too bad, Mr. Rafferty." Brenda pushed him down again, firm but careful of his injuries. "I can't let you die on my table."

She pulled out a sedative patch and rubbed it to activate the cells.

"I see him in you... Howell's blood through and through." He squinted at her. "Where is she? Where is the woman who let my baby girl die while she pined for that monster?"

"I won't talk to you. I'll kill you is what I'll do." He winced and grasped his side but still pushed up. "I've waited forty years!"

Brenda pressed the patch to his neck and he dropped instantly. She glanced at her mother, recognized the masked expression. No, not her mother right now. Her captain right now. Over this last mission, she learned to respect that and after quick orders to her medics, began working.

"I'll let you know when he's done," Brenda said to her.

Purchase Links: All Romance, Amazon,  B&N, and Books on Board
Where to Find Me: Facebook, Blog, Website

Thanks so much, A.R., for making Spacefreighters Lounge one of your blog tour stops.

Please leave a comment below for a chance to win the first Telomere Trilogy novel, REVELATIONS OF TOMORROW. And if you want a shot at the whole trilogy, you can "like" A. R.'s Facebook fan page at the link above.