I don't do New Year's resolutions. Since becoming a published author, I decided hopes and goals for the upcoming year and comparing them to the previous year would work better for me personally. This time, I'm doing things a little differently. Considering at the start of 2014 I was on the verge of quitting the whole writing and publishing game, it's quite amazing to look back on it as a whole. In January I had a ton of real life problems smack me in the face, on top of one publisher bringing in an exclusivity clause that had me pull a story and the intention not to submit anything further, my first publisher being bought out by another and pulling my debut novel from retail sites, and a third closing its doors leaving two of my books homeless before they'd even been published. Not great.

And now? Well, I had six titles published this year. SIX! If you look on Goodreads, I have eleven titles in total. Admittedly, this year it was three short stories and three novellas, but still...

The sheer volume of work was terrifying, and yet throughout the year I kept adding to it. Responding to sub calls, planning to do NaNoWriMo but then not doing it, pulling out WIPs and submitting them on top of self published works I'd already scheduled... >.<

So what came out this year?

What is contracted/scheduled for next year?

1. Print edition for Restless In Peaceville in February (Lycaon Press)
2. Print edition for Tethered in March (Breathless Press)
3. Zombie Girl: Dead Awakened, a YA dystopian romance and first of a trilogy (due April 2015 from Lycaon Press)
4. Keir, scifi romance novel (self published re-release of my debut novel with Lyrical Press Inc., and Book One of the Redemption series)

And what I hope to put out, time and funds allowing:

Yeah, I have big plans. That's eight new titles there. I released six in 2014 and had no intention of repeating the performance, partly because it was a non-stop amount of editing, releases and tours--fun but exhausting! But the Keir books have been waiting for so long, while I can't stop with the other stories. And before anyone thinks, hey, no one can put out all that stuff at such a rate without the quality suffering, I can assure you I never put anything out but my best. Bear in mind that Keir is a re-release, the sequel has been around since 2009, the side story was written in 2011, Revived and the solstice story in 2013, and Zombie Girl 2 is already half written. So no. I'm not just throwing these out the minute the rough draft is finished. Half of them have already been through extensive revisions, edits, polishing, and even past my editor Dani in some cases. Only two are full length novels that have already had a lot of work done on them over the years since I first wrote them, and even the novellas/shorts have been reworked. About the only ones that will be relatively 'fresh' off the press are the Zombie Girl shorts, and those will have to pass the submission test at my YA publisher.

As you can also see, I intend to self publish more next year, and have little scheduled for submission. Self publishing depends a lot on having the money to pay for edits and artwork, and also how busy my editor is. So, I can't guarantee 3-7 (though I have committed myself to putting out Keir's Fall if nothing else). This isn't a one-finger salute to traditional publishing or my small press publishers either. At this point in time, I simply have nothing ready to submit to them, and a promise to put out the Keir series by myself. Most of the SP titles were written before I became contracted to Breathless and Lycaon (and I don't regret signing up to them one little bit - they are awesome!). But I won't commit my Keir books to a publisher again. I am on a promise to deliver the two Zombie Girl books and fully intend to put those in over 2015. I really hope to have more to submit to them in the future. As it happens, both Zombie Girl and No Angel were written in response to submission calls by my publisher, a rare occurrence for me and a show of my commitment to them. I am not one who can easily write to a sub call.

So what else did I achieve this year? Well...

Total word count - 65000
Total words edited - 271000 (this is final word count on each title and doesn't count how many times they went through edits. If I say at least three times each, that's 813000! Kind of explains my lower word count for writing this year).

Come April 2015 I'll have published 9 titles in the space of 13 months, even if two of those are the print release of previous ebooks releases in the same period. Right now my backlist looks like this - 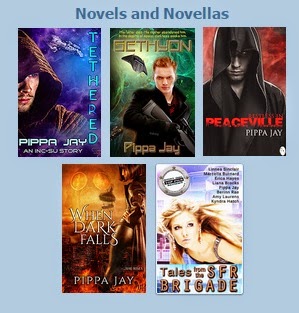 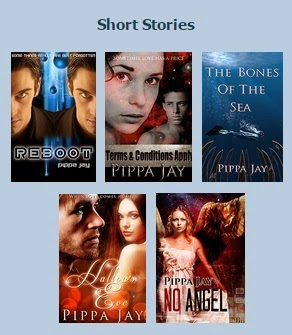 But that wasn't all. In December I got notification that my YA SF Gethyon was a finalist in the EPIC eBook awards. Woot! 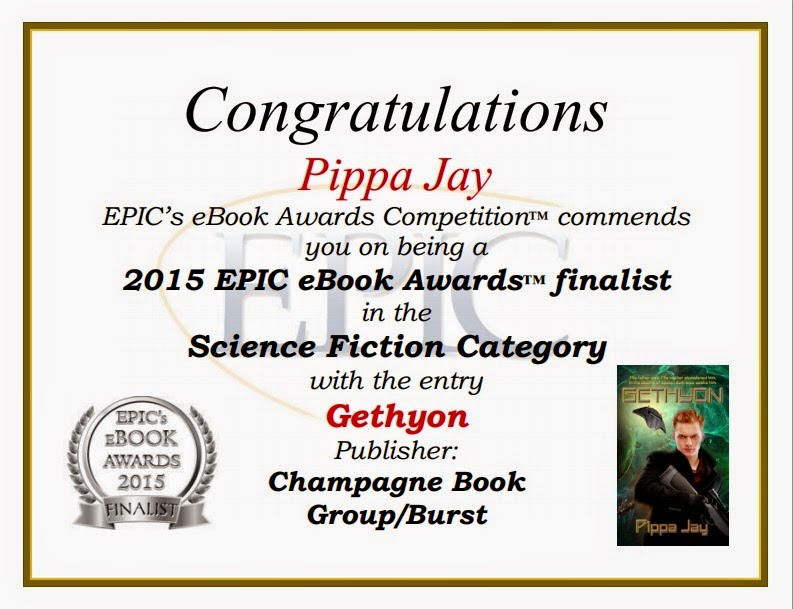 And my daughter's school put samples of Gethyon and Restless In Peaceville (my YA paranormal with zombies) into their library and suggested I come in to talk about them.

I can't begin to put into words how awesome this year has been, especially when looking how completely it turned itself around in the first couple of months, from apparent disaster to my most productive year in terms of releases. Of course my word count has suffered (65K is still good, but it's not the 100K I'd hoped to repeat).

And 2015? Well, that's looking pretty awesome. Not just for me but for two of my co-bloggers here as both Donna and Laurie prepare for their publishing debuts,  joining me and Sharon on the virtual book shelves. Go Spacefreighters crew!

I'd like to share some of my best bits from 2014 aside from publishing. So - best book that I read was Spark Rising, a debut post-apocalyptic romance by Kate Corcino. Best film - without doubt SciFi adventure Guardians of the Galaxy. Favourite highlight - the Women in Scifi panel in London, where I finally got to meet my fave author Jaine Fenn for real, closely followed by BristolCon where I met Jaine again, had two lovely chats with author Janet Edwards who took the time and effort to visit our table, and who spoke to my daughter for an hour about writing. I'm also extremely grateful for and humbled by the lovely reviews I've had this year, and the support of so many awesome people - friends, colleagues, and readers. On a personal front, I'm glad I got to meet up with an old school friend I hadn't seen in 25 years, albeit all too briefly, but sad to have missed out on more recent friendships. I'm grateful for another year without serious health issues, and proud of my children for their excellent school records and the energy and enthusiasm they put into the things they love.