Fortune's Pawn: 7 Reasons Why I Loved This SFR 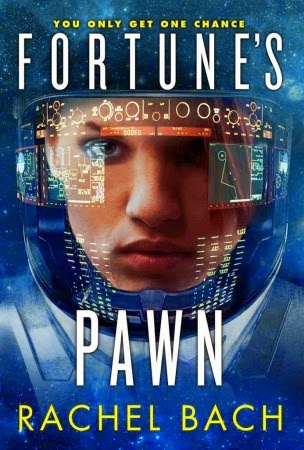 Hiya, fellow SFR fans. Sorry I've been MIA for the last couple of weeks, but there are big things happening behind the scenes. Big things. I'll be sharing some of my news in future posts. (We're not quite at T-minus Dishville yet.)

Meanwhile, I do get to dish on something else--my latest SFR reading experience: Fortune's Pawn by Rachel Bach.

I've had a number of "you gotta read this" messages from peers over the course of the last couple of months, but like everything else, that advice got shuffled off unto my conveyor belt of "Things I Will Do Someday When I Get to Them."

When Someday finally rolled around, I was so glad I plucked up this gem.

1.  Fascinating Heroine
Notice I didn't say "relatable." There's no way 99% of society can relate to this awesome mercenary of the distant future and her incredible mech suit, which she's christened Lady Gray. Lady Gray is her respected and cherished partner, custom armor she dotes on and has sacrificed for. An empowering agent who seems to give her the gifts of omnipotence and invincibility. Who transforms her into a superhuman wonder. You get the impression that nothing can touch her once she dons Lady Gray. That idea, you'll soon discover, is totally wrong. Bad, bad things live in this universe.

2.  Intriguing Set-Up
The heroine, Devi, is driven to achieve her ultimate goal. The man in her life and their on-again, off-again, just-in-it-for-the-minute relationship is no match for her ambitions. She's independent, career-oriented and beyond the influence of mere male persuasion. Proposal of marriage? Pshaw! Not when the adventure of a lifetime is calling. She's determined to win a security position on a ship called the Glorious Fool, a sought after gig that's led many a talented merc to graduate to the ultimate prize of mercdom--being accepted into ranks of the elite Devastators. Or else to meet a horrible, untimely death. More typically, the latter. But the MC isn't intimidated by the mere threat of death. Onboard this battered cargo ship, her density awaits. Or so she believes. Truth is, Devi is about to meet her match.

3.  Deceptive Hero
I didn't know what to make of the hero at first. He doesn't seem your typical hero material and he isn't employed in your typical hero's job. He's a...well...he's a cook. Yes. A cook. Oh, and he babysits the captain's daughter, too. Umm. Okay, he's got those classic good looks, he's an all around nice guy to the heroine and he does have the ponytail thing going on, but....yeah. He's a cook.

4. Alien Aliens
I love me the Xith' cal! Devi's first introduction to the aggressive, killing-machine alien species is actually quite humorous. Her second encounter is anything but. The Xith' cal are somewhat reminiscent of the Alien franchise bad boys, but bigger, badder, meaner and much more mobile. The stuff of pizza-driven nightmares. Can anything be badder or more deadly than the Xith' cal, you ask? Surprise! Yes. There is one thing. The cook. Wait! What? The cook? Seriously? Yes. Seriously. The cook. *evil grin*

5.  The Deep, Dark Secrets
I got to the end of this novel and I still didn't have a handle on what's really going on. But I mean that in a good way. I got a sense that there's "stuff" going on at a much deeper level than one book can reveal. It's going to take time to unravel. The conspiracies, secrets and paradoxes seem incredibly dark and complex. All the more reason to read on. Upon finishing, Fortune's Pawn, I immediately ordered Honor's Knight, book two in the series. Oh, and the third novel, Heaven's Queen? Here's a hint how great this series promises to be. Heaven's Queen just got named as one of the top Sci-Fi readers' picks of 2014 on Goodreads. Have I mentioned I can't wait to read on?

6.  The Motley Crew
A richly drawn and imaginative cast of characters rounds out the heroine's "down times" with the bonds of camaraderie and the celebration of contrast. From the touchy (alien) pilot, to the gentle, compassionate, but mysterious (human) roommate who wields a Force-like-power, to the peer/rival macho he-man (human) fellow merc, to the authoritarian (human) captain, to the darkly autistic, chess-playing (?) daughter, to the....well, the ship's doctor was a real twist. Like in...OMG! No spoilers. You just have to read it for yo'self. Really! Oh, and there's also the cook. Did I mention the cook? *snarky grin*

7.  The OH NO! Conclusion
The conclusion is one of those OMG-she's-alive-but-yet-it's-ripping-my-heart-out endings. Ann Aguirre's Grimspace series comes to mind as having a deeply angsty storyline, but Rachel Bach really has The Touch. She handled the novel's end game with an amazing aplomb. I am in awe. It's clear the relationship is going to take time to develop and overcome a mine-field of obstacles and set backs, but that's okay. I can be very patient when a series of books is so well-crafted it can hold me in a state of thrall while I get there.

IN SUMMARY
I've been craving another SFR that I can rave about for quite some time now, one of those stories that ticks all the boxes for me. I found it. Fortune's Pawn is a flawlessly-written, mesmerizing and ambitious tale that highlights all the good things that great Science Fiction Romance can aspire to be.

Your mileage may vary depending on the type of story you prefer. This book probably isn't for those who crave books with a lighter tone or that are heavier on the romance elements. I think readers who enjoyed John Scalzi's Old Man's War series would thoroughly enjoy Rachel Bach's characters and voice.

And one more thing. As peer Pauline Baird Jones often says, a rising tide floats all boats. I can't help but think this book is going to do nothing but great things for the SFR genre as a whole. My hat's off to you, Ms. Bach. The Paradox Series looks to be a SFR dynasty in the making.

Want other opinions? Read more reviews of this novel:
Cuddlebuggery
The Book Smugglers
The Midnight Garden: YA for Adults
RT Book Reviews

Quick, Fun Related Read:
My Book, The Movie (The author's casting for her novel, if it were a movie)

Recommended Reading: *****
Before the debut (and subsequent success) of Rachel Bach's Fortune's Pawn, she wrote a Hell-Yes! article about her MC for The Book Smugglers that I highly recommend to all SFR writers who've been struggling with the whole ugly gender-in-SF thing. The title of her article is Upsetting the Default. Really. Check it out.

You can find Fortune's Pawn and other books in the Paradox Series on Amazon and at other booksellers.