Do you believe in psi?

Like a lot of authors, I imagine, I'm sort of this half-and-half mashup of critical thinker (hello, internal editor) and open-minded creative free spirit. Born and raised in Oklahoma, I got a healthy dose of superstition from my Granny. My pulse always jumps to find I've got an important appointment on Friday the 13th, though my common-sense half knows better. And I still eat black-eyed peas on New Year's Day.

I can roll my eyes with the best of them when it comes to anything in the woo-woo category. I write sci-fi, and I believe in the power of scientific minds and scientific explanation. And yet ...

I've lost count of how many times I've dreamed about something before it happened. In fact, just this morning I was woken from a dream by my phone ringing. The dream was about a truck that my ex-husband had apparently (only in the dream) left in front of our house. Big truck, like the ones that haul cars. He'd left it parked far from the curb and I had to move it. But each time I moved it and got out, I found it was still far from the curb.

So back to that phone call. It was my landlord upstairs reminding me the garbage collectors were coming today. We live in a cul-de-sac and are supposed to park elsewhere on garbage day, but both my partner and I had forgotten. I scrambled into my clothes and flew out with both sets of keys (he was in the shower). My partner drives a truck that was broken into recently, and the thieves messed up the ignition, so first I struggled with the key. Also, it has an old camper on it, and you can hardly see out the camper window, so then I struggled to back up a hill looking only through the rearview mirrors.

You probably see where I'm going with this. And this happens at least every couple of months. Some dreams are more striking than others, like the time I dreamed about a ghost while staying in a hotel outside Portland. (Turned out the ghost had been seen by many guests.)

So I have this history, but also I think there's just a part of me that wants to believe that we don't have all the answers yet. In fact we know we don't. Take quantum physics.

In quantum physics, to the best of our understanding, observers affect (you might even say effect) outcomes. So of course there's been lots of talk about quantum physics from a "power of the mind" perspective. The lead researcher of the Institute of Noetic Sciences in California recently published a paper in Physics Essays about how groups of meditators affected the outcomes of double-slit experiments. The researcher, Dean Radin, wrote the book Entangled Minds about how quantum physics may enhance our understanding of psi phenomenon. (This book was critical to the development of parapsychologist Tess Caufield, heroine in my recent sci-fi romance release Echo 8.) It's a compelling read about a marginalized branch of science, and it contains a fascinating history of parapsychology. 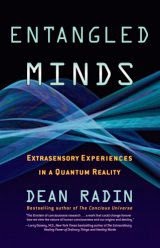 One note Dr. Radin sounds often in the book is how even scientists can be prejudiced and refuse to accept facts if the implications of those facts don't fit with the scientist's worldview. The guy who first suggested the idea of our circulatory system was laughed at by his peers. One went so far as to say (paraphrase), "If he thinks he can actually hear this in the body, he's deranged."

I guess my conclusion here, if there is one, is there's plenty of room for a thinking person -- even one who reads lots of science books -- to question conventional beliefs about psi. In Entangled Minds Radin cites studies that have shown folks who indicate some level of belief in psi tend to be well-educated (while the opposite is true for superstitious beliefs).

Certainly plenty of sci-fi, fantasy, and paranormal authors include elements of psi in their stories. But what do they actually believe about it? What do you believe? Have you experienced psi phenomena (or anything you couldn't explain) first-hand? Do you have a psychic Granny (or Auntie, or sibling)? If you do believe in psi are you out of the closet about it?
Posted by Sharon Lynn Fisher at 5:00 AM