If Wishes Were Horses: A Photo Album

I'm still in "Writing Reboot" mode, so today I'm going to share some photos of the other big part of my life--our horses and the ranch.

Photos of our two-year-old Thoroughbred in training, "Star." 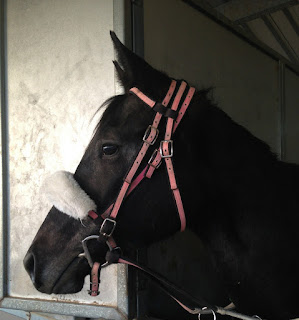 Star is beginning her second month of training with one of the top trainers based out of Sunland Park.

She's still in her "evaluation stage" though our trainer recommended we go get our fingerprints done--meaning he thinks it's time we file for our owners' licenses. Good sign!

If she continues to progress well, she'll probably follow the circuit of racing in New Mexico. First, she'll go to Sunray Park in the north of the state near Farmington, which just opened for its spring meet. Then to the Downs at Albuquerque over the summer, where she'll be close to home. Then on to Zia Park near Hobbs in late fall, and finally back to Sunland Park, which is a New Mexico suburb of El Paso, Texas, for the winter.

Here she is in her pink work bridle before a morning exercise with a look that seems to be saying, "Is it time to go play?" 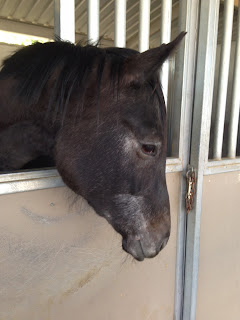 Here's a shot of Star where it shows how she's in the process of greying out on her face. Grey genes have to come from one or both of the parents, and in Star's case, it's very easy to follow the grey down through her pedigree.

The Axe and Silver Song were both grey.

I'll stop here, where the grey lineage splits into two branches, but I can actually trace her grey genes all the way back to the beginnings of the breed. The earliest horse in her pedigree where the grey color was noted was called Fairfax Morocco Barb, born in 1633.

All of Foggy Note's foals were grey, so she is considered to have been a homozygous grey. She's also in the pedigrees of outstanding sire Tapit, Frosted, Hansen, and many other notable grey horses that are running or producing today. (Not Arrogate, however, who's grey genes came through Caro.) 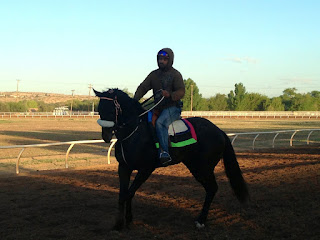 Here's Star under saddle on the training track with her exercise rider, J.R. for a morning exercise. At this stage of the game, building muscle and stamina is the primary goal. We'll find out if she carries the speed and heart her pedigree suggests as she develops later this summer.

It was a beautiful day for a jog, with the early sun rising on a mild but cool morning, the doves cooing in the background and the sound of hoofbeats on the track.

J.R. indicated to us that Star has a good mind and likes her work. We know from her runs here on the ranch that she's quick, athletic and agile. The big question will be if she can put all the positives together on the racetrack along with a driving desire to win. 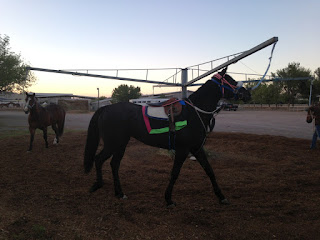 While being worked, she performed a beautiful flying change of leads with J.R. in the saddle. This entails a little "skip" in her stride where she switches the front leg she leads with.

Performed during a race, a horse is usually on the inside lead going around the turn, and a change of leads to the outside leg helps reduce fatigue and sometimes gives a horse an extra kick of energy as they come into the stretch.

Going on the walker with other horses is also a part of her exercise routine. Here she's being walked under saddle. 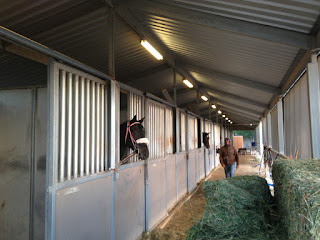 Here's a last shot of Star peeking out of her stall in the training shedrow.

She looks like she's saying. "Hi. Whatcha doing? Did you come to watch me today?"

She almost got to rub elbows with one of the "big boys" prior to the Sunland Derby when Bob Baffert's Kentucky Derby hopeful Bronze Age was stabled in our trainer's barn to run in the Derby prep race. But Bronze Age was actually at the Sunland Park track barn itself and not here at the nearby training center, so Star didn't get to meet a potential celebrity.

Today also marks a very special day for Star and for us, because it's the fourth anniversary of the death of the great racehorse and champion sire, Storm Cat. Storm Cat passed away on April 24, 2013 after leaving an indelible mark on the breed. He ran eight races with four wins and three seconds including the Grade 1 Young American, and over $570,000 in earnings. But his biggest impact on the breed were the horses he produced. He was one of the--if not the--most expensive stallion in history with a stud fee of $500,000. He was the grandson of the immortal Secretariat, through his outstanding daughter Terlingua, and also grandson of the great Northern Dancer, sired by his son Storm Bird.

His name is in the first four generations of the pedigrees of many of the great racehorses today, including Triple Crown and Breeders Cup Classic (Grand Slam) winner, American Pharoah.

Here's a tribute to the late, great Storm Cat. Rest in peace, Champ.


Star is Storm Cat's granddaughter, her sire being his son, Stellar Rain--but she's also his great-great-granddaughter, since Storm Cat is also on her dam's side of her pedigree. She has a host of other great racehorses in her pedigree, like Seattle Slew, Tale of the Cat, Lion Heart, and further back, Wild Again, Majestic Prince, Native Dancer and Man O' War.

But champion bloodlines guarantee nothing. As the old saying goes, "You breed the best to the best...and hope for the best."

This is something I once wrote about Thoroughbreds (I must have been waxing poetical that day):


You cannot develop a breeding program
for ethereal qualities like heart and courage.
These traits are spiritual, and will never be found
contained in the DNA sequence.
They do not breed true.
They cannot be captured in carefully selected pairings.
But when this blend of fate and miracle occurs,
often in the unlikeliest of candidates,
it is the stuff of dreams and legends…and rightly so.

So at this point it's all crossed fingers and wishful thinking for Star. If you want to follow Star's career and those of the other horses we've bred, as well as the Kentucky Derby (coming up on May 6th) and the Thoroughbred industry in general, you can keep track on our Facebook page here:
Rising Star Thoroughbreds - New Mexico

Recently, I was asked if I've ever put a horse in a book. No, not yet. (Though there is one hologram of a cherished horse in an upcoming novel.) To date, I've only drawn on my knowledge of the horse industry for certain aspects of the plots--the breeding industry, pedigrees and the discipline of dressage. But I do have this idea brewing. Stay tuned. :D

Meanwhile, back on the ranch...

Spring has sprung and the trees and flowers are abloom...in spite of an April Fools Day snow storm. Here are a few photos.


Hope you've enjoyed your visit with Star and the ranch photo album.