What I thought of Thrawn the novel 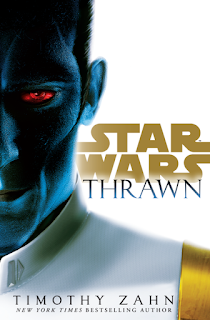 I've recently finished reading Timothy Zahn's new novel, Thrawn. In fact I've read it twice, which is clearly a very good sign. I don't bother finishing books that don't grab my interest (I don't even TRY to like them). I expect on that basis you'd expect me to give it a resounding five-star, I-loved-it review.

In fact, I've found this review very difficult to write. Because I've had trouble articulating what my problem was.

Thrawn, the blue-skinned, red-eyed humanoid who became a grand admiral in the Star Wars Empire's navy, has long been a favourite character. I wrote a review of the first trilogy, written in the '90s just after Return of the Jedi faded from memory. I hope it's not considered a spoiler to say that Thrawn is killed in the last book. I was not the only one who was bitterly disappointed. Thrawn became a cult figure, popular with writers of fan fiction. Zahn used Thrawn in a couple of other books, but with a title like Spectre of the Past you'd be right in assuming it's more the idea of Thrawn than the admiral himself. He does play a cameo role in Troy Denning's Tatooine Ghost, both as the Imperial presence Leia and Han have to outsmart, and as an individual.

Zahn was eventually forced by the clamour from fans to write more stories about Thrawn – a number of short stories showing his brilliance as a tactician, set in the time before the fall of the Emperor. Then he wrote Outbound Flight, a novel about Thrawn as a young man and his first encounters with humans. And his first encounter with the Jedi, particularly Jedi Master C'Baoth, whose clone plays an important role in the original trilogy.

With Disney's acquisition of the Star Wars franchise, many of the Expanded Universe characters and stories were relegated to 'legend' status. They weren't part of the main story line. That appeared to include Thrawn, but Disney execs grabbed a brain and reinstated him in the animated Star Wars Rebels series. And they did a great job. The animation is good, the voice works, and they have captured the mix of aloofness, humanity (if I can use that word) and tactical brilliance that sets the admiral apart. Thrawn will kill and destroy if the action is necessary to achieve his goal, but not otherwise. He's not your 2D villain who will annihilate for the sake of it.

And after all that, back to the book. Zahn had to make sense of over twenty-five years of Star Wars history and show how Thrawn came to be the only alien senior officer in the Imperial Navy.
The book starts with a re-engineering of a short story Zahn wrote years ago showing how Thrawn was 'discovered' on an alien planet and brought into the Imperial fold. The story is called Mist Encounter, and it was reproduced pretty much as written. Zahn dropped a few secondary characters and replaced them with Cadet Eli Vanto, who would become Dr Watson to Thrawn's Sherlock Holmes.

From there, the book is a series of short stories, each chapter describing Thrawn's meteoric progress through the Imperial ranks as he wins battle after battle - some of them smaller in scope than others. First stop is a three-month orientation at the Imperial Academy for Thrawn, the end of his course for Vanto. Then to their first ship etc etc. until Thrawn finally receives the rank tiles of a Grand Admiral. Vanto is with Thrawn all the way, learning from the master, at first resenting him, then admiring and respecting him. On the way, we meet Thrawn's advisory, a shadowy figure called Nightswan. He's an excellent tactician who becomes something of a thorn in Thrawn's side, but he's not a villain, he's an antagonist who eventually is used to reveal another side of Thrawn.

Just as in Sherlock Holmes it doesn't pay to put too much effort into deciding if Sherlock's logic is the only possible solution, it's the same with Thrawn. I've always been happy to suspend judgment.

There's a second arc to the book – the story of Arihnda Pryce. She appears in Star Wars Rebels as Governor Pryce, Thrawn's ally of sorts. Her chapters describe her change of fortune from a family-run mine on an obscure planet through losses and disappointments to finally claw her way up the hierarchy to the rank of Governor. On the way she encounters Thrawn on a couple of occasions, which gives the backstory of her interaction with Thrawn in Rebels.

For the first time, the story is told from Thrawn's point of view. We watch him notice human body language, working out from that, more than the words, what he thinks the speaker intends. He looks for patterns in everything he does – including the art he uses to deduce a species' behaviour. Vanto, of course, chronicles the action, as Dr Watson does in Sherlock Holmes. Pryce's arc, written from her POV, shows the corrupt nature of the Empire, with people (usually men) in power using and abusing everybody to advance their own cause. Zahn does achieve a balance with gender roles, though. Many of the officers in the Navy are female.

I suppose you're wondering what disturbed me about the book. I had hoped for more about Thrawn as a man/person. We get only the merest hints of how he interacted with his colleagues and crew, even Vanto. Absolutely nothing about life outside the Navy – or even inside the Navy outside a battle. And forget about 'show don't tell'. Zahn sketches scenes. As an example, in one battle, the ship is attacked by a swarm of vulture droids. These objects are never described. Of course, all you have to do to find out about them is look it up. That's the thing about Star Wars – this stuff is known. But the same thing happens with Pryce's arc. Locations are never more than line drawings.

The Chinese have a wonderful form of brush painting that epitomises what I'm trying to say. You will have seen it – a picture of something achieved with a few brush strokes that somehow captures the essence of whatever is being depicted. The emblem for the Rugby Sevens is a great example. The figure in the middle of the ball could be the stitches in the leather – or it could be a running man – all done with three brush strokes. Or even the symbol for Cathay Pacific – something flying – a bird, a tail?

So… yes, I enjoyed the book in the way that a person enjoys a glass of water on a hot day. But I suppose I'd hoped for more. Certainly there's an unexpected twist in the tail, and there's a prospect of more to come. Oh – and by the way, I think Benedict Cumberbatch would make an excellent Thrawn on the big screen.

OY – ARE YOU LISTENING MISTER DISNEY?????