Since Laurie posted her five films to inspire writers last week, I thought I'd share five of mine and the inspirational quotes or themes they gave me. They also tend to be my go-to comfort watches, films I go back to again and again when I just want to cuddle up under a blanket and forget about the real world (this isn't all of them, just my cosiest).

Galaxy Quest: "Never give up, never surrender!" Also our motto here at Spacefeighters Lounge. This is a rather blatant Star Trek spoof, where a cancelled scifi show has been taken as fact by a group of aliens, who then kidnap the 'commander' of the series to help save them from the villain with both hilarious but also emotional consequences. I still haven't forgiven them for bumping off Quellek. Also features the fabulous but sadly departed Alan Rickman as the classic actor saddled with the part of alien sidekick and a tagline he loathes.

A Knight's Tale: "One man can change his stars." In medieval England (one of my favourite time periods) you can only enter the honoured game of jousting by being of noble blood. But common-born William Thatcher breaks all the rules to become the knight he's always wished to be. He also inspired a lot of Keir's personality in terms of honour, integrity, a certain air of innocence, and sheer bloody-minded stubbornness in aiming for the stars no matter how impossible, including winning the lady of his dreams and the respect of the Black Prince Edward. This is a story all about chasing your dreams, which is what becoming an author is all about too.

Warm Bodies: Love conquers all. Really. Even a dead guy can fall in love and be redeemed by it. While it can be a little cheesy in places and if you aren't into blood and gore I'm afraid the zombie sections are pretty standard brain-eating bloodbaths a la Hollywood, but if you can tolerate those this is probably the sweetest love story I've ever seen. R is an unusual kind of zombie, and it's different to see the world from a zombie point of view. His sole purpose is to keep the girl of his dreams safe (although maybe a bit stalkerish in tone at first), and that purpose leads him back to the land of the living despite having to face the very real danger of being shot by the Living as a zombie. Very loosely based on Shakespeare's Romeo and Juliet, even including the balcony scene but with the proper HEA.

Megamind: "...there's a yin for every yang. If there's bad, good will rise up against it..." Personally I always felt sorry for Megamind and thought Metroman was actually a bit of a jerk and part of the reason Megamind was pushed into the role of villain. This film always reminds me that the villain is the good guy in their own version of reality and that even the villain can become the hero. A play on the story of Superman.

How To Train Your Dragon: Never be afraid to experiment. Hiccup is basically the runt of his Viking village, bad enough if you weren't also the son of the chief to boot, with a giant size reputation to live up to. Small, clumsy and full of clever ideas that he can't quite pull off, everyone sees him as a joke and a liability. But when Hiccup finally achieves a lifetime ambition in shooting down not just a dragon but a Nightfury - the rarest and greatest of dragons - he learns nothing is as it seems. This is a story about loyalty, friendship, and the willingness to be open-minded.

Mini Review:
Transformers-The Last Knight: a disjointed, illogical and dissonant collection of overly loud explosions, rubbish car chases, a ridiculous and insulting Monty Python style miss-mash of Arthurian legend, and a monstrosity that's about 2 hours 28 minutes too long. It wins only in taking my award as worst film I've ever seen and being the first I've seriously considered walking out of before the end. If only I'd said that to hubs because he was literally hoping I would for most of the film. Even if you're a fan of the franchise, skip this. I enjoyed the first three as leave-your-brain-at-home actions films while ignoring the sexism of including a pretty girl just as eye-candy, endured the fourth as an 'oh, well, maybe the next one will be better like Pirates of the Caribbean' but this one was infuriating and ridiculous, as though Bay spent all his time and attention on a few fight scenes, then abandoned the actors and special effects department to ad lib on entirely separate scripts. I heartily wish it was the last, but unfortunately there will be others. I won't be paying out to see them though. Rating: minus several million stars and not worth the brain cells I sacrificed watching it. Beyond dire. AVOID!
Status Update
I'm currently at 48% on Keir's Shadow and at 95K. I have until the end of this week to get it to my editor for assessment. I want to know the plot issues before I even think about edits and cover artwork, being as I'm pretty much rewriting the whole original 75K that I had in order to fix believability issues. Reunion is done for this round of edits except for one overriding issue with Keir throughout that I have to fix. Unexpected is still with my other editor and Revived remains untouched.
Chook Update
Project Egg (day 14): yesterday I candled (shone a light through the eggs in a darkened room) the six eggs for the second time to check if we had chicks or not. To my surprise and delight, all six have a viable chick! This is all first time stuff for me - I candled them at seven days and got three definite and three I wasn't sure on since despite lots of research I wasn't entirely sure what I was looking for, but this time there were no doubts whatsoever. They are due to hatch in one week from today - the 4th of July - but may be slightly earlier or even take until the 8th. So, not only did they survive being through the post, but myself and adopting mum Effie have clearly taken good care of the eggs, even if my part only extends to taking Effie off them a couple of times a day so that she eats, drinks and poops while the eggs get a few minutes ventilation. We are go for hatching chicks!
In the meantime, my girls have been enjoying a brighter garden after our neighbour had all the trees his side of the fence hacked down. Unfortunately this has led to my girls going to bed later and wanting out earlier as the coop has had more sunlight.
And as for the pigeon babies - they're getting bigger every day, and looking a little less scary. Maybe. 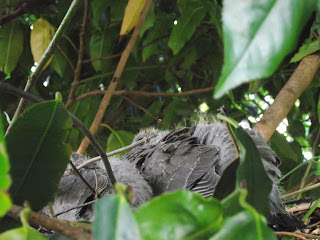 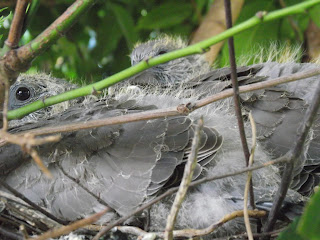