Recently, I started reading Wanted & Wired, a SFR in the cyberpunk sector of our genre galaxy written by author Vivien Jackson. I was immediately enthused and so, so hooked--futuristic world, complex characters, wildly imaginative setting--wow! So while I'm still chomping at the bit to finish this first novel in the Tether series, the second book went into the queue for release later this year. (Can you tell I'm stoked?)

So I'm very honored to host Vivien Jackson today for a guest blog on a subject that's been bandied about the internet with mucho gusto in recent weeks--Wonder Woman!--and to briefly discuss Wanted & Wired's sequel, Perfect Gravity. Welcome, Vivien.

Yesterday, I took my daughters to see Wonder Woman. They’re huge superhero-movie fans—Guardians of the Galaxy (both Vols.) and Doctor Strange are their favorites … or were. See, even though they’re jaded, veteran fans, they seemed to understand that something monumental was going on with this movie. They were quiet all the way through, ingesting.

With credits still rolling and her gaze still locked on the screen like it was made of magic, the younger kiddo breathed, “She is so badass.”

We stopped off to take selfies next to the standee, and, pushing through the glass doors, out into the over-bright late afternoon, the elder kiddo said, “You know what, Mom? There aren’t any other movies where the girl is the hero, all by herself. I mean, Harley Quinn was pretty cool, but it wasn’t her movie. And River Tam and Black Widow, same thing. They all have teams and, you know, boys who tell them what to do. They aren’t in charge.”

Of course, my brain started whirring and I’m thinking, well, Ripley was kind of end-to-end the heroine of Alien, and there was that unfortunate Cat Woman Halle Berry thing, but in the main? Out of movies she would know? This probably was the first, or at least the best. It was all about the heroine, all about her struggle and her journey, not some dude’s wish-fulfillment earn-the-princess-prize flick.

So you know what, kiddo? You’re right. This is new. And women my age have been waiting for it for so long.

She is all of us when she selects clothes based on how they feel on her skin and how feasible they are for her activity level, rather than whether they accentuate her eyes or minimize her belly pooch.

She is all of us when she cannot remain on the sidelines and watch her sisters fight. When she must instead fight alongside them.

She is all of us when she takes enemy fire, just stands there against the incoming hail of bullets, so that the people she nurtures and leads can safely do their jobs. (Hint: This is what moms do every day, just with fewer special effects.)

She is all of us when she walks into the halls of power and stands unembarrassed, confident amidst the decision makers. Like she belongs there.

She is the best of us when she disbelieves in the inherent evil of humanity and strives instead to reveal the core of us, which is amazing.

I have a book coming out in November, Perfect Gravity, and though the heroine, Angela, isn’t an Amazon princess, she is a woman burdened by authority, a decision maker who sometimes makes the wrong one. Her journey is a struggle to own all the disparate parts of herself, to be both warrior and nurturer, thinker and feeler, fairy-tale princess and real-life power broker.

When I saw this cover from Perfect Gravity—brand new and official, the first time Angela has had a face outside my private brain space—my thoughts were very like kiddo #2’s after seeing Wonder Woman: She is so badass. 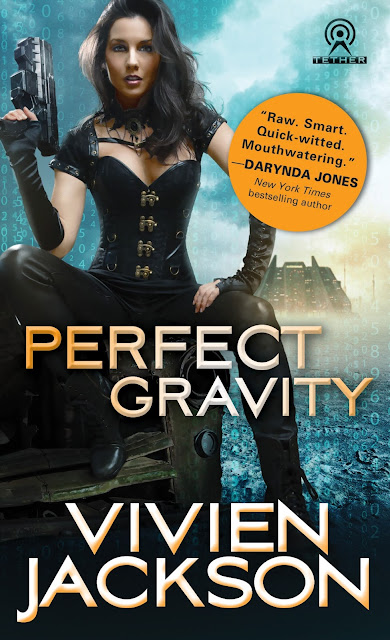 When someone tries to kill powerful continental senator Angela Neko, Texan outlaw and old flame Kellen Hockley is the only man who can keep her safe...and help her save the world. Perfect Gravity is second in the snarky, sexy cyperpunk Tether romance series.

Vivien Jackson writes stories with robots, grenades, pixies, and always, always down-home salacious kissery. She’s an unrepentant fangirl of many fandoms and would love to discuss your favorite ships: @Vivien_Jackson on Twitter or on the web at www.vivienjackson.com.