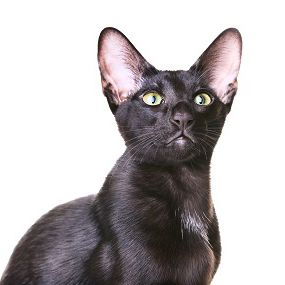 I've won an SFR Galaxy award! Or maybe I should say Puss won a Galaxy award. Hey, I'm not complaining. I'm one of Puss's greatest fans. And if I ever had any qualms about writing a follow-up to her first adventure, that's gone by the wayside.

Hearty congratulations also to my fellow Spacefreighters blogger, Pippa Jay, for winning yet another Galaxy award for her latest release Unexpected. (You'll find it on the right sidebar).

On behalf of Puss I'd like to thank the organisers and judges for the SFR Galaxy awards. She's as pleased as I am with the recognition (but between you and me, she's totally unsurprised).

For those who haven't met Puss she's an alien feline with a few smarts. But she's still an awful lot like the Earth cats at your place. 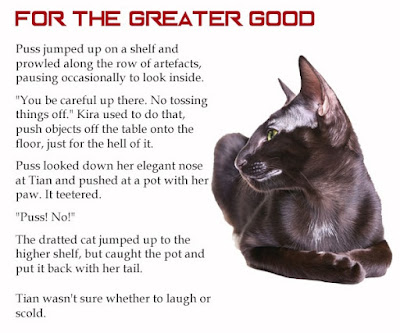 You can read about her in For the Greater Good. 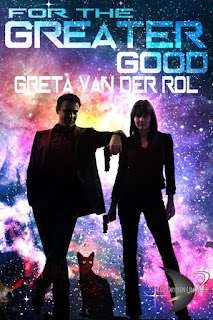 A Human settlement is destroyed and all signs point to an Yrmak raid as Imperial agents Tian Axmar and Brent Walker scour the site for clues. One thing they never expected to find was a survivor, a rare alien feline with unusual talents.

As tensions between Humans and Yrmaks ratchet to the point of no return, Tian and Brent must bring all their cyborg skills to bear as they follow a dangerous trail of deception and misdirection.

The feline, now dubbed Puss and strongly bonded to Tian, holds the key to many of the questions driving the investigation. Unfortunately, that bond drives a wedge between Brent and Tian’s working relationship, leaving Brent with second thoughts about his decision to become a cyborg.

As the evidence unfolds, it becomes clear that a devious plot to incite an interspecies war will strike at the very heart of the Empire. With lives at risk, there’s no time to waste. Racing against the clock, Brent, Tian, and Puss must stop the planned carnage, and this time for Brent and Tian… it’s personal.

Buy the book at Amazon B&N Kobo iBooks
Posted by Greta at 12:00 AM