SpyDog Secret Revealed (But No Spoilers!)

My latest science fiction romance story, SpyDog, is about to be unleashed on the universe as part of the much-anticipated Pets in Space® 4 collection on October 8th.

(Pay no attention to that author doing cartwheels behind the curtain.)

Yes, I'm a bit excited about my new 30K+ novella and how it has such dramatic tie-ins throughout my series. Today I'll share one of the secrets (but without a side of spoilers).

For starters, here's the Inherited Stars Series blurb that defines the overarching premise behind all the books:

The year is 3500 AD—more or less. No one really keeps track anymore.

Since the fall of peacekeeper planet, LaGuardia, two centuries before, much has been lost. Few remember that LaGuardia was once known as Draxis. Fewer still have knowledge that Draxis once guarded a spatial vortex—a crossrip in time and space—and passageway to a legendary world called Earth where the human species originated.

Somewhere, hidden in a forgotten archive, is the written history of the Draxian Universe and the chronicles of the men and women who helped forge a future in the stars.

That "forgotten archive" plays a role in many of the series books, and SpyDog is one of them. But this is hardly the first mention of this mysterious history in books already released.

Here are two snippets, one each from Farewell Andromeda and SpyDog that both involve this important archive, though the stories take place two centuries apart. 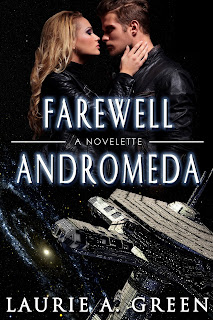 Scene Set-Up:
An exchange between two lovers with very different lives--Tiharra Bell, a deep space DEDship charter pilot who has just flown to a remote outpost called Andromeda Station, and Donner Dane, a man of science who lives there.

Tiharra and Donner may not have long together, and both are dealing with that knowledge in this scene.

“The Rathskians outlawed cloning centuries ago,” I reminded him.

His mouth turned down for a moment. “The Duumarakhans.”

“It was the Duumarakhans, the predecessors of the Rathskians, who outlawed cloning. They made it their mission, since their kind had been genetically frozen in time for five hundred generations.” He shook his head. “We’ve forgotten them. So much of our history was lost in the Great Realignment.”

I packed my feelings away, grateful for the temporary distraction. “How do you know this?”

Donner’s eyes brightened. “This station contains an incredibly rare treasure. A complete library of the combined Draxian-Terran history. I’ve had a lot of time on my hands and reading is a passion.” He raised his incredibly brown, incredibly soft eyes to mine. “I have a strong need to understand as much as I can…”

Before I cease to exist, I finished for him mentally.

“This library…” I croaked, trying to turn my thoughts away from the heartache of his demise. “Seems an odd thing to entrust to a remote space station.”

“The information wasn’t brought here. It already existed in this structure’s old databanks. This station has a history too. It played a part in the Great Realignment. Before it was converted for use as an outpost and observatory, it was known as Mona Loa Station.”

“A loa is a type of spirit in an ancient religion. The designer named all his craft after paranormal entities. He’s the same man, by the way, who invented the first DEDspace drive.”

“Specter,” we said in unison.

We exchanged tentative smiles, ignoring the bleak truth that hovered over us like a thick Terran fog bank.

“I find an odd sense of connection in that,” Donner said. “I live on a space station and you operate a drive created two hundred calendars ago by the same man.” 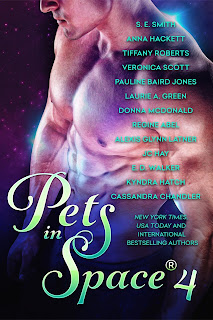 Snippet from (Pets in Space® 4) SpyDog

Scene Set-Up:
In my upcoming story, readers will discover clues on how the records that Donner refers to may have ended up on MONA Loa Station...or Mona Loa, as it's called two hundred calendars (years) later.

This scene involves a confrontation between Sona, a rare warrior-class Rathskian female who may or may not be an enemy agent, Rigel, a Network agent and SpyDog handler, and Garr, the pilot of the transport who is tasked to extract them from planet Banna, where they were marooned.

“LaGuardia is the home of the Royal Draxian Archives," Garr said. "The records of our history that the Ithians are desperately trying to erase so they can replace it with their lies about our past. They want to bury the truth. High Queen Katrina was real. Our origins on the planet called Earth is truth. The Flame and the Fire Lords did exist. The vortex they passed through was a reality. It’s all there. All the lost knowledge. All the forgotten centuries. Almost fourteen thousand years of it. And it’s in jeopardy.”

“I know of these archives,” Sona said pensively. “They preserve important history for my people, too. But what does it have to do with us?”

“We’ve been directed to acquire the archives on datacells and deliver the contents to the Network. Before the gigadam Ithians can destroy it forever.”

“And with Commodore Gant missing in action, this is a priority for the Network?” Rigel questioned.

“This may be one of the most important things the Network ever does,” Garr declared. “Whether they succeed or fail with their other plans.”

Rigel considered his words. Yes, there was value in safeguarding important historical records, but it wasn’t his priority. “Why us? Why not send a Network battleship or destroyer to secure this data?”

“Think about it,” Garr grated, showing his impatience. “The Alliance doesn’t realize the Network has a fleet. They can’t show that hand. Not yet. But one small, aging wreck of a transport touching down on LaGuardia isn’t going to attract attention.”

“There’s truth in your words,” Sona conceded, “but it doesn’t change the reality that I must reach the transport to MONA Loa in time.”

“And if I give you my solemn word you’ll get to MONA Loa on schedule?”

“You can’t make that promise.”

“Consider this," Garr pressed. "Why would they order me to collect these records if they weren’t going to be delivered straight to MONA Loa? What would be the point?”

Sona shifted her weight. “You are speaking the truth.”

I hope you enjoyed this brief visit to both Farewell Andromeda and my soon-to-be-released SpyDog, in Pets in Space® 4 and how they fit in The Inherited Stars Universe.

As an author, one of the things I enjoy about writing a series is offering subtle and not-so-subtle clues or tie-ins in each new story, and revealing connections to the other works and characters.

Want to see the connection between the series anchor novel, Inherit the Stars and SpyDog? Then grab a free sampler from the Pets in Space® 4 authors that contains original stories, teasers and original artwork. (My contribution is a teaser that shows how the events in SpyDog were initiated in Inherit the Stars.) But hurry! This sampler is only available for a limited time.

Get Farewell Andromeda for 99 cents on Amazon now


And please don't forget that Pets in Space® 4 will again support the wonderful Hero-Dogs.org, the amazing organization that raises, trains and provides service dogs to veterans and first responders. Ten percent of all preorders and first month's royalties of Pets in Space® 4 will go to support Hero Dogs! The last three Pets in Space® collections have raised over $7,100 for this very worthy cause. You can help by pre-ordering today.

Have a wonderful week! And stop back next Monday to discover the inspiration behind the stories from many of the award-winning, bestselling authors of Pets in Space® 4.