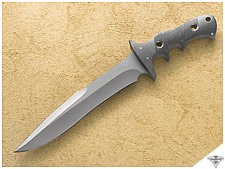 It was designed by world renowned martial artist and retired USMC Master Sergeant AJ Advincula (my sensei), and custom made by knife maker Jim Hammond.

It's also the knife my alpha gladiators use in my sci-fi romance series, The Survival Race. We’re first introduced to the knife in book one, Captive: An Alien Abduction SciFi Romance, where broken-warrior Max uses it as he and his “mate,” Addy, escape from alien captivity.

This 14 inch knife, with its nine inch re-curve blade, was designed for one thing: combat. And Max knows how to wield it in a fight.

I own this knife (though my husband mistakenly believes it's his, but let's not open up that can of worms) and train with it. Let me tell you, it is one serious weapon. You can cut a limb off with this thing!

Relax, no humans were hurt in the making of this video. We simply took a rolled up tatami mat and soaked it in lake water. This dense, waterlogged tatami is supposed to simulate the muscle of a human arm. If you wanted to simulate bone, you'd add a dowel to the center of the mat. Anyone can cut through tatami with a sword, but you need to have good technique with a short blade. Play the video clip and watch what this awesome knife can do.

*Warning* Don't do this at home kids.

If Max could see me, I hope he'd be proud.

For specifics on the Flesheater knife, its history and design—including the unique four grip handle—I encourage you to click over to Custom Knife Maker Jim Hammond's website.

Here's an except from Renegade (book 3) in which Max teaches scientist Griffin (this book’s hero) how to use the Flesheater combat knife to slit a throat as Griffin will be competing in the Survival Race.

“The tree. Imagine it’s your opponent. Slit its throat.”

Griffin glanced up into the branches. “He’s a little tall—”

The whack upside his head came hard and fast.  “Don’t be an idiot.” Max grabbed the knife, slunk behind the tree trunk—roughly the width of a human head—and wrapped an arm around it. You hold the man’s head snug against your shoulder and neck. This prohibits him from moving and exposes his throat. Then cut him.” He sliced the tree. “It’s as simple as that. Your turn.”

“Moving on.” From behind, Max’s hand clamped down on Griffin’s nose and mouth, suffocating him as his head jerked back against Max’s body. Back arched, he saw sky.

See it? No. Feel it. Absolutely.

“Feeling vulnerable?” From the laughter in Max’s voice, he enjoyed having the upper hand.

Vulnerable was an understatement. Griffin struggled to breathe beneath the strong hand crushing his nose and mouth.

Flailing his hands to hit Max’s face or poke his eyes didn’t work. His head tightly pinned, Griffin was helpless as Max dragged him in circles. Good thing he didn’t eat breakfast, or the dizziness would’ve made him vomit. When Max stopped, something sharp burned across his neck.

Griffin crumpled to the ground, clawing at his throat. It wasn’t cut as he feared. It was scratched.

“Fingernail,” Max said. “There’s no time to slice you open for real.”

After a moment to regain breath and bearings, Griffin stood behind Max and snaked an arm around his face.

In a quick motion, Max slipped the hold. A hand clamped over Griffin’s mouth and nose again. His head jerked backward. A fingernail sliced his throat. “Too slow. Do it again.” Max shoved him away.

On the next try, forest and sky spun. The ground slammed into his back, knocking the wind out of him.

“Take control or you’ll be thrown.”

He coughed and gasped until his breath finally normalized. “Can’t you stand still for a minute until I get the technique down?”

Each frustrating time Griffin tried, Max countered and simulated slicing his throat. His neck burned. Sweat dripped into the raw wounds and stung.

And then it happened.

Maybe Max had fatigued from two hours of training on an empty stomach or maybe Griffin finally learned, but with quick and controlled movements, he found himself slicing a thumbnail across Max’s neck.

Chin high, shoulders back, and chest expanded with a deep, satisfied breath, Griffin was ready to take on the world.

Yes, it did. But the fact was Griffin had done it. He’d learn how to slit a man’s throat.

Why the hell did that make him proud?

Each book in the Survival Race series (CAPTIVE, FEARLESS, and RENEGADE) are stand-alone sci-fi romances in which each book's couple finds their happily ever after. No cheating. No cliff hangers. If you enjoy...


...then buy a copy and enjoy the adventure and romance today!

Stay safe out there!
~K.M. Fawcett