The Recruit: An Adventure in the World of Draxis - Part III

This is a serialized short story set on the world Draxis, the planet that's central to my upcoming trilogy and frequently referenced in current stories in the Inherited Stars Series.

You might think of Draxis as a legend comparable to the legend of Troy. For a long time the world wondered about this once-great civilization. Did Helen of Troy's face really launch a thousand ships? Did Achilles and Hector once engage in combat outside its gates? Did the great walled city of Troy ever truly exist?

That question was left unanswered for centuries, until the ruins of Troy were discovered -- a vast, walled, Bronze Age metropolis  -- just as Homer described it and just where he said it would be.

Now imagine Troy as an entire planet lost to time -- but buried in a very different way.

The Recruit was originally written as bonus material for Draxis--a scene turned inside out and told from a different character's POV. I hope you enjoy your first venture into the lands of Draxis, and that you'll come back for more of The Recruit in future blogs.

This is Part III. For those who read the previous two parts, there's a brief recap below, or you can read Part I and Part II by clicking these links:

The Recruit: Part I

Or if you'd prefer to read all parts posted to date, you can find it here:

The Recruit - All Parts to Date

In the last snippet post, Baranar had just met a new recruit to the Death Rangers--a company of hardened men who patrol the ancient, dark and menacing forest nicknamed The Green Death. This new recruit is to be Baranar's partner.

Baranar and his peer, Gallin, wager about how long this new recruit will survive (not long) but the stranger overhears their conversation and confidently counter-wagers them his sword that he'll survive the tasking.

Then something catches Gallin's eye. The new recruit carries a Blade of Duumarr, the weapon of an order of deadly assassins believed to all be long dead at the hands of a past High Priest. If this stranger carries the blade, could he possibly be a lone survivor? Baranar follows the man to the stores, dreading the thought that his new partner may be a deadly assassin.

Part III begins as Baranar and his new recruit begin their duty as rangers in The Green Death.

My back to a tree, I chewed a length of Sibba bark, its spice biting my tongue, and studied the recruit. He stood in a tiny, open glen, staring up the hypnotic pipe of a Tree Well—a rare glimpse of sky surrounded by a circular wall of impossibly tall trees. Tree Wells often created illusions in the human brain of being trapped in the depths of a bottomless pit with no means of escape. A sensation of suffocation was the usual, and milder, reaction. Some went mad and tried to claw their way up to the unreachable heavens from the primordial floor. Those hapless souls were picked off by the hordes of flesh-eating limb dwellers that waited overhead.

But the recruit seemed unaffected, his face tipped to the heavens with the faint trace of light on his cheekbones. Was he praying? A chill swept over my skin. A Dumarrakhan might pray before battle. So rapt in his thoughts, the recruit was unaware what lurked in the ebony shadows just beyond the clearing.

I grimaced. This one would need no help finding fate. 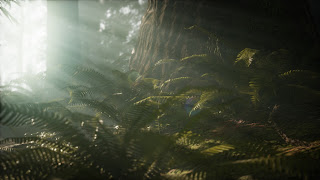 The Green Death was ancient and wicked. No one knew how long it had existed. The trees never died here. They grew tall as mountains, spiking thousands of feet into the atmosphere. Below the treetops, countless layers of canopies formed distinct levels, each thinner of vegetation and deeper in twilight than the one above. Little light filtered through the tangled masses of leaf, limb and vine to the forest floor below. By day, a ranger might not always require lit lamps to travel, but by night, the Green Death was as dark as the miles-long lava tubes of Sarcassius. Though not as still and never as lifeless.

Something shifted in the twilight, little more than a blur of black in blackness to my trained eyes. I didn’t see, so much as sense, the fluid steps of a stalking farratora. I braced my knees and pressed my back to the tree, ready to jump. Where one farratora prowled, a dozen more were sure to follow.

It crept up on the recruit from the forest gloom. I knew from experience it would launch without warning from heavy-muscled haunches and twist its head mid-flight, driving upper and lower saber-toothed fangs into the recruits back, crushing or severing his spine. Then, he would lay paralyzed as the beast began to feed and the rest of the pack closed in to tear him apart.

This recruit would pay the price of overconfidence, and Gallin would have his prize. But more than that, a burden would be lifted from my shoulders and a threat eliminated. I might yet see my ninth season.