New year, new start. Having been repeatedly AWOL here I'm hoping that some new medication is going to help with the terrible brain fog that I've had for...well...years. Not just burn out, not just exhaustion, but a lack of hormones. I am officially a woman of a certain age. 😆 Anyway, a new year is a good time to kick off with some new prompts on the blog, starting with some snippets. So here's mine for my week to post - from one of my pandemic releases and seven years in the making. A sci-fi mystery with a hint of a love story therein, though the opening might not sound like it... 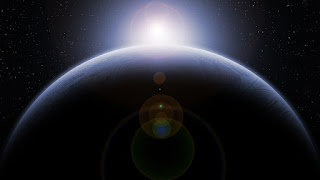 Two days from Caprelli and fourteen days before solstice.

Mel stared at the innocuous, dirty-white globe on the wide screen, her eyes burning. The planet was just a big ball of ice and rock, spinning in space. Not much to look at. Not much more to be seen down on the surface, especially with the tempestuous weather that rarely abated. And yet from the instant she’d learned about the mission to Vintro, it had obsessed her every waking moment until nothing else had existed.

And now it sat there, taunting her. The planet that had stolen all her dreams. Vintro. The planet that had stolen all her dreams.

Melandria Solei has always dreamed of commanding a starship and exploring the universe. When her own dark-eyed older lover steals the position she's worked for, she never expects to go chasing after him in a stolen ship to a world colder than revenge...