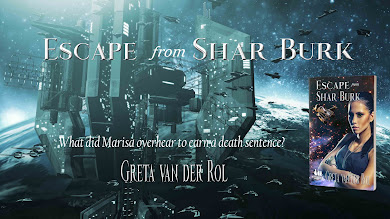 Escape from Shar Burk is the third of my Morgan's Misfits books - three women working together bucking the strict class system in the society they live in. Each of the three books features a romance as well as a mystery in a space opera setting.

Shar Burk is an enormous space station run by Governor Soldar. He's as crooked as the proverbial dog's hind leg and he has an appetite for beautiful women. They never last long. Marisa was one of those beautiful women. But she got lucky.

Here's a snippet from early in the book:

"Do you remember the fall?" Chet's voice was soft, full of sympathy.

Marisa nodded. Every moment of it, in terrifying slo-mo. "Yes. I clutched at balconies trying to slow my fall, smacked hard against one. That was probably what broke my arm. I remember hitting my head against something and the pain as my face opened up. Then I hit the awning."

Marisa stared at the table top, at her hand holding the half-full mug and took a sip. Her hand shook.

"Yeah." Marisa took another, larger gulp from the mug. Sympathy was nice but it didn't get you anywhere. She'd get even. One day. Soldar, too. She'd see them dead. Both of them. 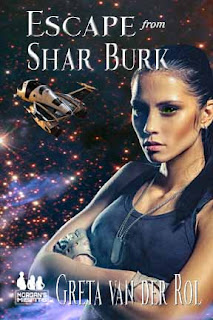 The Misfits are off on another planet-hopping adventure.

When Chet, Toreni, and Jirra rescue Marisa, mistress of Shar Burk’s brutal governor Soldar, from certain death they think they’re just helping a fellow woman to a new life. But what did Marisa do to earn a death sentence? Is it just a couple of dictators flexing their muscles? Or something much more dangerous? They set off to follow a tenuous trail where Marisa discovers there’s a whole new world off Shar Burk space station and men much nicer than Soldar.

But by taking in Marisa, the team has been noticed by Soldar. Helped by a traitor in Fleet Intelligence, he’s on their trail before they discover his plans. And he wants them all dead.

Buy the book at Your choice of vendor

Space Opera/ Science Fiction Romance. There are some non-specific sex scenes. There’s action, adventure and politics in this adventure of Morgan’s Misfits. There are appearances from Morgan and Ravindra. Escape from Shar Burk is a stand-alone story. You don't need to have read the other books to work this one out.