Rewind: Where does my book fit? 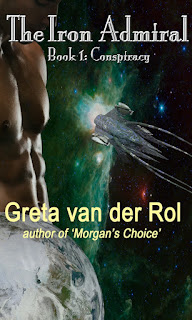 This is a repeat of an article I wrote back in 2018. The issue remains the same and it's something that's very important to me.

I sometimes wonder how big the market is for stories like mine. I can't in all conscience adorn my covers with beautiful male chests, although I'll admit I did try it, a long time ago. (See left) I suspect it worked, too, because readers at least read the blurb. But over time, my stories have become less explicit when it comes to sex, and I believe lots of man-titty signals explicit sex. On the flame scale, I wouldn't put my books at more than 2-3. They're not fade to black when the bedroom door closes, but you wouldn't want to use them as a 'how to'.

Science fiction is such a hard genre to define and the merge with fantasy is unavoidable. We write about 'science' that does not exist. It may in the future, but it's impossible now. Artificial gravity, forms of faster-than-light travel, advanced artificial intelligence, lifelike avatars, alien beings - the list goes on. It's not magic. We don't have magic in our SF worlds. But we can have shifters, vampires, strange alien psi powers and the like. Anything, really - as long as we claim a scientific explanation.

Anne McCaffrey's much-loved Pern series is one that has often been poo-pooed by the SF purists. It has dragons and mental telepathy, so it's fantasy. But the dragons are genetically engineered local species, with powers that evolved so the little fire lizards could escape the ravages of thread. Somebody once described the dragons as an ecologically sustainable air force. I like that. As far as I'm concerned, that's SF, not fantasy. As we say in the copyright notice on our books, "any resemblance to any person (or animal) is purely coincidental".

I actually find it harder to fit the romance half of the title. I'd be much more comfortable being in Science Fiction - romance. Genre, you see. It’s all about marketing. Into which pigeonhole does this book fit? I had some fun drawing a diagram to illustrate some of the complexities of genre.

Some genres are pretty easy. In romance, the romance must be the focus of the plot, and it must have a happy ever after (HEA) ending or a happy for now (HFN) ending. I talked about the rules of romance here. But every genre has ‘shades of grey’ (yeah, yeah). Science fiction ranges between hard SF and soft SF. I discussed that here. On the hard SF – soft SF line, I’d put most space opera sort of in the middle. Star Wars and Star Trek would definitely be down the soft SF end, McDevitt’s books would be down the hard SF end. Romance has its continuum, too, often expressed in degrees of ‘heat’ (ie explicit sex scenes). In ‘sweet’ romance, the scene stops at the bedroom door. In erotic romance, the sex is explicit.

Now we get to science fiction romance, which is a combination of two genres. The SCIENCE romance – ROMANCE science line indicates what is the most important focus of the work. Would we have a story without the romance? Would we have a story without the science? I would suggest that real SFR should be down the science ROMANCE end – I think Avatar is a good example. Without the romance, there is no story. And in Avatar the explicitness of the sex component is most definitely ‘sweet’. Interestingly enough, one of McCaffrey’s early works, Restoree, is listed in science fiction. Yet Restoree is without a doubt science fiction romance, with a ‘sweet’ tag on the sex register. So SFR has been around for a while, mixed in with SF. But there isn't a lot. When I went looking, Linnea Sinclair's books were in romance, not SF.

When I started writing, I knew I’d write SF because that’s what I like. But I wanted to add a bit of emotion to my writing. Most SF either seemed to leave out love and sex (Asimov), or it was so understated that it almost disappeared. An example of the latter is Moon’s Serrano series. SF was pulp fiction, with an expectation that it was fast-paced action-adventure. A response to a query I sent to a publisher around 2008 reinforced that belief. “Well written, but needs more action.” So I added more action. Still no cigar.

Okay, what about science fiction romance? Ah, but most SFR books are in the romance section. This has an advantage in one way, because romance sales are way, way more than SF. But it seems only a small subset of romance readers will read SF. Moreover, the expectation for the romance genre is that the romance is the core of the book. No romance, no story. I can honestly say that not one of my books fits that definition. Of them all, the Iron Admiral duo come closest and even with those two I had to do some serious tweaking for my editor to agree it had earned a romance tag.

We are told that sticking to one genre when writing is a good idea. And it makes sense. With that in mind, I resolved to write SFR, albeit with less emphasis on the romance.

As far as SFR is concerned, I'm definitely going against the trend. I see more and more books that emphasize the sex. Reverse harem has become popular and sexual encounters with aliens and cyborgs is huge. It's a matter of personal taste, isn't it?

What’s the outcome? Well, if you’re looking for a fast-paced, action-packed read with a complex plot – come on in, sit right down. Would you like to call that pulp fiction? Sure. Will there be some emotional elements, some sex? Sure. Love is a powerful emotion, sex is a fundamental driving force. You’ll find those things in everything I write. Do I do my research? You bet I do. I try to make my science sound, my history correct, my settings convincing.

And as it happens, SFR stalwart, Pauline Baird Jones, has just started a group for books like mine - and hers. Lots of action, lots of romance but the sex is not explicit. It's called Blush Free Books. If you're a reader who prefers to skip the steamy scenes, this might be a group for you.

Welcome to Blush Free Books, a website and newsletter dedicated to building a community of readers who love exciting, action-filled, and well-written books that are hotter than the clean and sweet, but close the door on the steamy scenes.

There are communities aplenty for steamy and inspirational books, but there is an underserved group in the middle: readers who crave well-written books with all the action, suspense, excitement, and romance without the graphic sex. These stories have the edge-of-your-seat action with a hint of spicy language and some of the sexual tension not found in the cleaner-sweeter stories.

The group is not just for SFR. You'll find fantasy, crime, paranormal novels that all share that basic characteristic - the sex isn't explicit. If that's your thing, come on over and join us. Authors, you're invited, too. See you there!