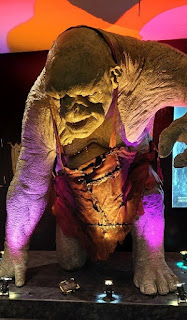 I've just returned from a fabulous nineteen-day trip to New Zealand. It's a beautiful country, full of wonderful scenery, glacier-carved valleys, fjords, forests, and unique animals. The iconic kiwi is in some ways closer to mammals than birds. It has two ovaries, not one. Its bones have marrow instead of the lightweight honeycomb bones of other birds. Like most flightless birds, it has the vestiges of wings so it did have them once. Oh - and its origins go back to Australia, not Gondwanaland. And did you know the Kea, the NZ mountain parrot, eats meat? No, neither did I.

We were staying in a hotel in Auckland with a bridge on the fifth floor over to the casino next door, so we went for an explore.

We stepped out of the lift and I was staring at Bill, one of the mountain trolls in Peter Jackson's movie, The Hobbit. I'm a HUGE Tolkien fan. Adored the books, loved the movies. I felt I'd died and gone to heaven. I stared around at the other trolls (Tom and Bert) and found the entrance to the gift shop, dominated by Smaug the great red dragon. I found Gollum with a salmon, the dreaded Pale Orc with his axe raised, and shelves of models and collectables of superior quality. They were seriously good, beautifully made dioramas of iconic scenes from the movies. Forty years ago I would have gone home with a lighter wallet and a bulging suitcase. But this time I settled for going on the Weta Workshop Unleashed experience, which demonstrated the ways in which the Weta team brings fantasy to life. Peter, who had been ambling in my wake as I oohed and aahed and explained where that scene happened or who that character was, declined to come with me. He had better things to do, like watch grass grow.

The workshop isn't about the Lord of the Rings and The Hobbit: it's about how the people who work at Weta bring fantasy to life. The visit looks at three very different films, all just about ready to be released. Fauna is a horror film set in New Zealand. Age of the Ever-Clan is a fantasy movie which imagines what might have happened if that meteor hadn't wiped out the dinosaurs and they had evolved further. Origins, another New Zealand based movie, is science fiction involving a huge, alien robot.

A lot of the exhibit is useful for writers, showing how the techs and the directors set up for a scene. Here's an example.

As part of telling us about the horror movie, Fauna, they’d set up a section of set where we could walk through a scary bit to give us a feel for how it all works. We were warned it would be dark and claustrophobic and small children and pregnant women shouldn’t enter. People went in as couples or as individuals with a gap between entrants so we could have the experience alone. Two young women went in before me but just as I was about to start, they came back looking seriously scared. No way were they going back in there.

I girded my loins and set off.

I walked along a boardwalk into thick forest just like the temperate rain forest you can find all over New Zealand. I couldn't hear the sounds of all the people I knew were out there. Foliage crowded the boardwalk and vines hung down around my face. I persevered and walked into a shed that seemed to be part of a slaughterhouse filled with hanging sheep carcasses and no obvious way to get out. I reckon that was where the two girls decided it was a resounding NUP.

And that was before I got to the scary bit, which I won't tell you about. Spoilers, you see.

I managed to get all the way through without panicking.

The tour is very much hands-on. People are encouraged to try things out, to pull the levers that animate the models, play with chain mail, carve objects, press buttons, get involved. The kids on tour loved it and so did most of the adults.

If you're a fan of special effects you're sure to find this place fascinating. The website will introduce you to the nuts and bolts of how it works and how it's done from gory makeup to set dressing, to making realistic weapons, to models and everything else.

Here's the website to give you a taste of movie magic.