Andromeda: A Trillion Stars Coming At You

As a SFR writer, I like to think I have a good basic general knowledge of astronomical bodies and the mechanics of space. But like any subject, focus in a little closer and you'll start realizing how much you don't know or never realized.

Part of the fun of SFR research, que no? 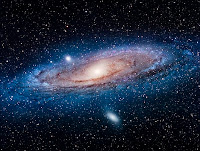 A few weeks ago, I started working on a short story about a scientist studying Andromeda, and stumbled across all sorts of interesting facts and surprising finds about our nearest spiral neighbor.

What started as simple research project soon turned into utter fascination. I couldn't wait to share my latest obsession with you all.

Andromeda is also known as M31 (which stands for Messiers 31), and NGC 224, but in older text it's referred to as Little Cloud and the Great Andromeda Nebula. First noted in 964, scientists didn't realize Andromeda was a separate galaxy until almost a thousand years later, in 1924.

M31 is the nearest spiral galaxy to our own Milky Way galaxy, at a distance of about 2.6 million light years. Meaning if we could travel at the speed of light, it would take 2.6 million years--longer than Homo sapiens species and most of our earlier hominid relatives have existed--to reach it. Since it takes light that long to get here, our view of Andromeda is actually as it was 2.6 million years ago.

Andromeda (the galaxy) can be seen in the Andromeda constellation, which is named after the princess in Greek mythology, daughter of King Cepheus and Queen Cassiopeia, who was intended as a sacrifice to a sea monster. (We've learned in more recent times that Andromeda is probably less like the princess and more like the monster.)

The Andromeda Galaxy is believed to contain a trillion stars (suns). In comparison, the Milky Way is believed to have less than half that many, or around 300-400 billion.

On a moonless night, the Andromeda Galaxy is visible with the naked eye. It is one of only a few extra-galactic bodies that can be seen without a telescope. 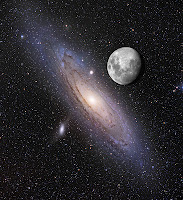 When you see Andromeda, what you're really seeing is only the bright central region. If you could see the entire galaxy with the naked eye, it would be six times wider than the full moon! (It's that big in the sky and still 2.6 million light years away.)

Even though Andromeda is more than double the size of the Milky Way in number of stars, it's about equal in mass.

The Andromeda Galaxy is expected to collide with the Milky Way in approximately 4.5 billion years. Every million years, it moves about 400 light years closer.

Andromeda is one of very few blue-shifted galaxies. Blue-shifted galaxies are a result of the Doppler effect as it applies to electromagnetic waves. When an object is approaching, its light spectrum shifts to the blue side. When it's moving away, the spectrum shifts to the red. The measurement is called radial velocity. This is how we know most galaxies are moving away from the Milky Way galaxy.

964 AD
Persian astronomer Abd al-Rahman al-Sufi discovered Andromeda and described it as a small cloud because of its appearance. Star charts of the era labeled it as the Little Cloud.

1612
German scientist Simon Marius gave the first description of Andromeda based on observation by telescope on December 15.

1755
Immanual Kant developed the Island Universe Theory that suggested some astronomical bodies were actually other galaxies like our own, not objects within our galaxy. His theory was rejected as ridiculous.

1764
Charles Messier, when creating his catalog of astronomical objects, was unaware of the earlier Persian discovery and credited the discovery of Andromeda to Simon Marius.

1864
William Huggins observed that Andromeda had a different spectrum from gaseous nebulae.

1885
A supernova was seen in Andromeda, so far the only one ever observed in that galaxy. (However, it wasn't realized until much later that Andromeda is a separate galaxy.)

1887
The first photographs of Andromeda were taken by Isaac Roberts at his observatory in Sussex, England, when the spiral structure of the galaxy was seen for the first time.

1912
The radial velocity of Andromeda in respect to our solar system was measured for the first time by Vesto Slipher at Lowell Observatory using spectography. He found Andromeda was moving toward our sun at 300 kilometers per second or 190 miles per second. It was the largest velocity ever recorded at that time.

1917
American astronomer Heber Curtis Olsen observed a nova in Andromeda, which eventually led to his supporting Immanuel Kant's Island Universe Theory of 1755 in that "spiral nebulae" were actually other galaxies.

1925
Edwin Hubble settled the debate when he identified extragalactic Cepheid variable stars for the first time in M31 photos. These were made using the 100 inch Hooker telescope, which helped determine the distance of the "Great Andromeda Nebula." His measurement finally proved Andromeda was not a cluster of stars and gas within the Milky Way, but an entirely separate galaxy located at a considerable distance outside it.

1998
Images from the European Space Agency's Infrared Space Observatory suggested the Andromeda Galaxy may be transitioning from a spiral to a ring galaxy.

2010
A team of astronomers studying M31 announced their theory that the galaxy was formed from the collision of two smaller galaxies between 5 and 9 billion years ago.

M31 or MESSIERS 31
French scientist Charles Messiers was only interested in comets and as a result began a catalog of objects that were not comets, known as the Messiers catalog. Andromeda is Messiers catalog number 31, also known as M31. Messiers first published his catalog in 1771 with 44 objects. The last update was made in 1966 with a final count of 110 objects.

NGC224
NGC stands for New General Catalog (of Nebulae and Clusters of Stars). It contains 7,840 deep space objects of all types, of which the Andromeda Galaxy is number 224. This catalog was compiled by J. L. E. Dreyer in the 1880s as an update to William and John Herschel's Catalog of Nebulae. The update was rejected by the Royal Astronomical Society who instead requested Dreyer submit a new catalog, the New General Catalog, which was first published in 1888. It was expanded in 1896 and 1905 with two index catalogs which expanded it by almost 5,400 objects.

DWARF GALAXIES
Andromeda has 14 known dwarf galaxy satellites, the best known and most visible being M32 and M110. It is believed M32 had a close encounter with M31 (Andromeda) in the past that removed its stellar disk. M32 then underwent increased star formation in the core region, which lasted until the relatively recent past. M110 also appears to be interacting with M31. Andromeda has many metal-rich stars in its halo that may have been stripped away from satellite galaxies. 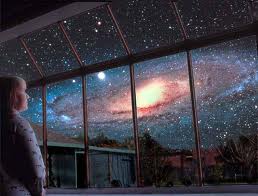 Andromeda is sometimes called a cannibal galaxy because it seems to be gobbling up other galaxies in its path. And guess what? We're on the menu. Of course, we won't see the approach of Andromeda in our lifetime--and most likely not even the lifetime of our species--but what a sight it would be!

I'll keep you posted on the progress of my Andromeda story.
Posted by L. A. Green at 4:13 PM