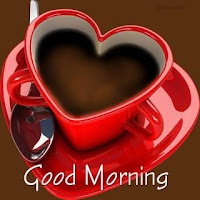 (This would be the perfect image if the coffee cup was gold instead of red, yes?)

The BIG DAY hath come. This is as close as it gets to a national holiday for Romance writers.

In case you're baffled by the title and clueless what this is all about, check out our previous post GOLD FEVER for an explanation of the frenzy surrounding this event. We'll also re-post the three RWA Golden Heart/RITA Award hot spots to track the news at the bottom of this post.

Here on Spacefreighters, we'll be zeroing in on just the Paranormal category (which includes SFR) and celebrating and congratulating our various peers that make the finals.

We've been very fortunate here on Spacefreighters to have at least one finalist in every one of the last three years. Sharon Lynn Fisher is our veteran Golden Heart competitor who has finaled in every GH competition she entered--2009, 2010 and 2011. In fact, Sharon was a finalist before she even became a co-blogger, and her final was the catalyst that helped this blog evolve into a joint blog for Science Fiction Romance writers. [Click to read the story.]

This year, Sharon is ineligible due to her two-time Golden Heart finalist manuscript, GHOST PLANET, now manifesting as a novel coming from Tor on December 1, 2012. (Take a gander at the shiny new cover just unveiled just this week over on our right sidebar.)

Authors who are published or under contract aren't eligible for the Golden Heart Awards, so their GH days are now prologue. But in this industry, that's a GOOD thing. I witnessed Sharon's Boot Ceremony last year, where she was kicked out of Golden Heart writers-in-waiting status as a "graduate" who earned her author's wings. If Donna and I are so lucky, some day we'll get "the boot" too. Pippa has already earned her wings. :)

If the internet gods are kind to us, we'll be tracking Paranormal category and peer finalists as they're announced and sharing news and other chatter in comments below. Please join in and share your thoughts, congratulations, questions or comments because this day only comes once a year! [Oh, and say "Happy Birthday" to Sharon, too!]

You can also check out three of the big Golden Heart Announcement Parties here:

RWA Golden Heart/RITA Finalist Announcements
The official web site of Romance Writers of America where the finalists go up on the lists as they're notified. The entire list should be posted by 2 PM EST on March 26th.

Judi Fennell's Golden Heart/RITA Squee Party
Author Judi Fennell has the stage all set for another big GH/RITA bash (it even comes with its own video introduction). She'll be posting the unofficial finalist announcements as the news comes in.

The Ruby-Slippered Sisterhood Announcement Party
The 2009 RWA Golden Heart Finalists are the most active former class on the internet. Each year they hold a big online party to share the excitement. They've been busy posting about the Golden Heart experience all week.
Posted by L. A. Green at 4:59 AM