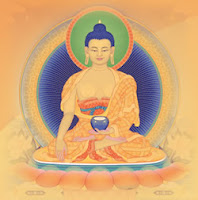 Over the last couple of years, a number of psychologists have published books based on the findings of recent neurological studies on meditation. This research shows, beyond a doubt, that meditation benefits the brain.

Meditation, or mindfulness, as the practice is often referred to, helps manage anxiety, stress, and depression. It also helps with motivation, focus, and relationships. I'm pretty sure it can even help your car run better. (I'm poking a little fun, but you could actually make a case for this. If mindfulness helps you focus your intentions and avoid procrastination, so you finally go and get that tuneup...)

Without going into too much detail (because this is really only the introduction for this post), meditation has been shown to gradually change the way your brain works, helping you ground yourself in the moment, and in your positive experiences. For more information about this, search on mindfulness authors (and psychologists) Rick Hanson, Dan Siegel, Marsha Lucas, and Elisha Goldstein. I'm just finishing Hanson's book now, and I love that it goes into physiological detail about how meditation works on the brain -- enough that I feel like I'm getting a crash course in neuropsychology.

And that is really the topic of this (meandering) post. As a fiction writer, and just as a curious human, I am fascinated by the growing connections between science and spirituality. Some of these connections are solid and proven; some are more tenuous. All are fodder for creativity.

Having taken a flying leap onto the mindfulness bandwagon myself (refer back to paragraph 2; notice the list of every stereotypical writer dysfunction), I have been attending meditation classes for the last two months. At the end of a recent class, meditators were told that a researcher was present. He had brought equipment to test whether focused attention could alter actual matter. (Yes, mind over matter!)

This illustrates another connection between science and more speculative ideas. Buddhist philosophy asserts that our mental perception of our existence actually forms our reality, and not the other way around -- in other words, we create our own reality. From a philosophical or psychological perspective, this is actually pretty easy to accept. Our feelings, reactions, judgments, etc., in any given situation, create our experience of that situation. (Mindfulness / meditation focuses on grounding us more in the experience than the emotion, so we suffer less.)

But quantum physics experiments can be construed to support the idea that we create our own reality in a more literal sense. (For a layman's explanation of observer-created reality, try Quantum Enigma, Physics Encounters Consciousness.) 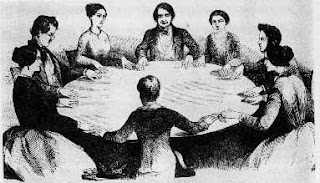 So, back to the meditation experiment. The researcher instructed us to do two meditations: one where we focused on mixing lemon juice with a cup of water, and another where we did the same with baking soda. The researcher tested the pH of the water after each meditation. Before you start getting excited, the instruments showed no change in the pH that wasn't attributable to normal environmental factors.

But the experiment itself reminded me of the Victorian era, when seances were being conducted in the fashionable parlors of the well educated. WAIT! Please note: I am NOT comparing meditation, Victorian spiritualism, scientific research, etc. But there was definitely a flavor to this modern-day experience that hearkened back. (You have to admit! We even had a candle.) 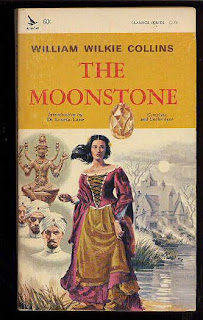 I thought about the rise in popularity of steampunk (which often blends Newtonian gadgetry with the supernatural, as in Neverwhere), and how there is this interesting connection between the modern and Victorian eras. Quantum physics has resulted in huge technological advances in our time, just as Newtonian physics did for the Victorians.

Quantum theory has led to really fascinating questions about psi, as well as popular interest in those questions (as evidenced by all the recent film and book plots based on parallel universes and psi abilities, including one of mine!). It seems at least plausible to imagine Newtonian physics gave rise to Victorian spiritualism in a different way -- maybe as a backlash against rationalism, and all the physics-based advances. And spiritualism greatly influenced some of the leading authors and poets of the time (Wilkie Collins, for example).

The show Warehouse 13 actually blends elements of both of these eras together -- both the science-based and the more speculative elements. (To read more about connections between quantum theory and psi, as well as a fascinating history of psi research, try Entangled Minds.)

I love thinking and talking about this stuff, so it's not surprising I've wandered far afield of mindfulness. But hopefully not of my original thesis. Scientific discovery fuels the imagination. Less tangible ideas -- philosophical, spiritual, paranormal -- fuel the imagination. Where these two intersect, the creative potential is...well...potentiated.
Posted by Sharon Lynn Fisher at 1:00 AM