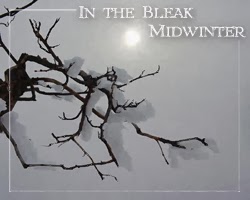 My blog this week is collection of random thoughts and images. Much like Donna's visual commentary on February, yeah, I'm so there.

But, there are always interesting things to share, even if my muse is on hiatus.

Like this: The 2104 Winter Olympics...FROM SPAAAAAACE! Photo releases courtesy of NASA in the International Business Times.

Or this review on "About Time," touted as a Sci-Fi (Time Travel) Romance, now available on Blu-ray. Hey! Did we miss this one? From the writer-director of "Four Weddings and a Funeral" and "Notting Hill," this one looks promising, although the technology aspects look suspiciously absent in the trailer.

And then there's this: An interview about a "Science Fiction-Romance mashup" called "Star-Crossed" (explained as if SFR is a totally new concept, you understand).

And yet another article about a coming SFR, "The Lobster" starring Colin Farrel and Rachel Weisz.

Do you get the feeling it's going to be a very good year for SFR on the big screen?

Want to read something truly eye-opening? Check out this article on Five Things that Cost More than Space Exploration." They DO make some very pointed points! Think about it.

Set to debut on February 26th is this Full-Size Space Shuttle Exhibit at the Ohio Air Force Museum built around NASA's first Crew Compartment Training. I may need to make a trip up to Dayton to check this out.

Did you know there's a huge asteroid set to fly by Earth today...and you can watch it live? No foolin'!

Is truth stranger than Science Fiction? Yes, says Lawrence Krauss, a professor at the Arizona State University on Phys.org.

So are you wondering how that whole "Women Destroy Sci-Fi" Kickstarter thing work out for Lightspeed Magazine? Would "beyond their wildest dreams" be an apt description? Read the follow-up courtesy of io9.

Want to meet the Largest Known Galaxy in the Universe? Say hello to IC 1101.

This YouTube video also gives great insight into the physics of the universe.

And here's a YouTube video put together to honor the 45th Anniversary of Earth Rise (the iconic photo taken from the Moon) and how it all came about.

All of these articles and videos were gleaned from spending a few minutes on the Spacefreighters Lounge NEWS SCAN and THE LATEST FEED news bars near the bottom of the blog. Did you find anything that inspired you?