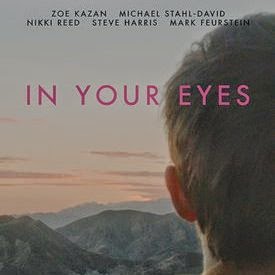 I just recently learned that famed Firefly director/producer Joss Whedon has released a Science Fiction Romance film, titled In Your Eyes. According to news sources, the film was debuted at the Tribeca Film Festival and is now available for online rental.

Now as a devoted Whedonite, I needed to learn more, so I started scouring the internet for more details. I was a little dismayed to read that the film had a "micro-budget" and the acting is described as "bland" though this is "masked by Whedon's writing." -The Western Courier

The film is a product of Joss Whedon's indie film studio, Bellwether Pictures and stars Zoe Kazan and Michael Stahl-David.

Really? A brilliant mind like Joss Whedon can't find a big Hollywood studio to back his films, but they're about to release yet another remake of Godzilla? How does that happen in my universe?

The film is about two individuals with very different lives and backgrounds, who are psychically linked to the point of feeling each other's physical and emotional pain. Dylan, an ex-con living in a trailer in New Mexico (hello, neighbor!), and Rebecca, wife to a socialite doctor in New England, have been connected since childhood, though neither understands the real nature of the mental bond.

The film is described as moving from supernatural drama to romantic comedy and back to drama with the sort of clever plot you'd expect Joss Whedon to deliver.

The movie buzzline is: "A meeting of minds, not bodies."

Want a glimpse of the first three minutes? Glad you asked. Indie Wire has one.

According the Billboard.com, Whedon is releasing the film as a $5 download through Vimeo on Demand and InYourEyesMovie.Com, where you can watch the trailer. In an article for USAToday.com, Whedon said, "It's exciting for us because it means we get to explore yet another form of distribution - and we get $5."

It's exciting for me because I now have immediate access to what I'm sure will be another Joss Whedon masterpiece. And a bonafide SFR, at that!