So who remembers the episode of Star Trek: The Next Generation where Data makes up a song while he's scanning for life forms?

I don't remember anything else about that episode, but I can't hear or use the term life forms without that song playing in my head.

Last Thursday I attended a talk on "Finding Alien Life: On Earth, on Mars, and throughout the Cosmos" by Dr. Steven Benner, director of the Foundation for Applied Molecular Evolution and The Westheimer Institute for Science and Technology in Gainesville, Florida. This was an event sponsored by the University of Washington's astrobiology department and the NASA Astrobiology Institute.

I'll preface this post by saying I attend every UW Astrobiology talk that I possibly can. I was a liberal arts major who loved science and space but was daunted by the math, and these talks are typically geared toward a nonscientist audience. I always find them fascinating and inspiring. The mere fact that there is an actual SCIENCE called "astrobiology" is enough to give me geeky little shivers. Benner said astrobiologists refer to their field as "a science without a subject matter." (And they refer to some of their *potential* research subjects as "Weird Life.")

With all that said, much of this talk *was* over my head. Though there was a healthy dose of entertaining scientist humor (including examples from multiple iterations of Star Trek) sprinkled in, the bulk of the talk was delivered in a strange language that consisted mostly of letters and funny little geometric graphics. My chemist friend who works in biotech (and attended the talk with me) was entranced. I, however, came away with the conviction that quantum physics is a walk in the park compared to chemistry.

But there were parts of the talk I *could* understand, and some of those sound bites are worth sharing.

He started off his presentation by talking about the growing interest in Big History, especially during this exciting time of accelerating exoplanet discovery. Here's a definition of Big History from Wikipedia:

...an emerging academic discipline which examines history from the Big Bang to the present. It examines long time frames using a multidisciplinary approach based on combining numerous disciplines from science and the humanities, and explores human existence in the context of this bigger picture.

Big History looks at Big Questions: Why did the Big Bang occur? How did we get here? What is life? These are questions the field of astrobiology is particularly interested in.

Benner provided a definition of life he credited to Carl Sagan: a "self-sustaining chemical system capable of Darwinian evolution." The last part of that definition is key, because without it, you could classify things like fire and crystals as life forms (examples taken from a discussion between Data and Beverly Crusher in another Star Trek episode). The key component lacking in these two examples is the ability to replicate imperfection. (Er, what?)

Both fire and crystals can replicate themselves, and, like other life forms, their offspring will contain flaws. However, the flaws/mutations in a "baby" crystal are unique, and not inherited from the mother. Also if the baby has babies, it will not pass on its flaws. So according to this definition, they are not life forms.

It's also interesting to note for science fiction purposes that Data would not be considered a life form by this definition. But Benner stressed this is merely our best definition of life to date. It may be that one day we'll discover something on one of those exoplanets, or even right here in our own solar system, that will cause us to revisit this definition.

After neatly boxing up life — at least for now — Benner went on to talk about how he and his colleagues search for extraterrestrial life and alternative life forms in labs right here on Earth. Benner's specific area of research is synthetic biology, and he is credited with being the first scientist to synthesize a gene from scratch. Applications of synthetic biology include developing treatments for diseases such as HIV and hepatitis, and resurrecting ancient proteins from microorganisms.

Extraterrestrial life, if it exists, clearly cannot be "observed" or "analyzed" according to traditional scientific method (at least not yet). Benner and his colleagues conduct their research via "synthesis." They explore the possibilities regarding life on other worlds by synthesizing life right in the lab — they try to gain a better understanding of life by creating it.

This is where the alphabet soup came in, and it had some to do with DNA and more to do with RNA, and I'll leave you to research the particulars on your own. In closing I'll drop one more fun fact about Dr. Benner before turning it back over to Data — Benner is most known for his assertion that life may very well have begun on Mars. The essential little organic bits involved in the origins of life are water soluble, and the Earth was almost completely covered by water when life came into the picture. 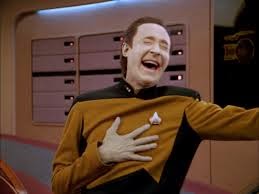