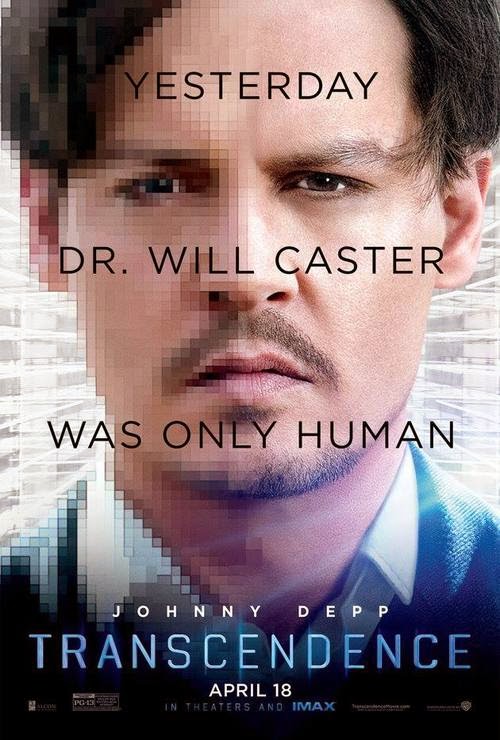 Pfister is best known as the cinematographer of INCEPTION and two of the DARK KNIGHT films (DARK KNIGHT and THE DARK KNIGHT RISES).   There’s little evidence of that experience here, however.  Pfister’s first film as a director is visually flat, easily something you could view at home on the telly.  The best image is wasted (as many film bits are these days) on the previews—the vast field of photovoltaic cells arrayed to provide power to the growing machine consciousness.  The majority of the film is confined to the lab, both visually and dramatically, the science fiction equivalent of a drawing room mystery.

As for Johnny Depp, let no one say his ego gets in the way of his artistic judgment.  In this case, he spends 30 percent of his screen time dying of radiation poisoning (not attractive, even in the Hollywood version), 30 percent as a computer-screen version of himself at the end-stage of the dying process, and the rest of the time as some variation of himself and screen versions of himself.  What genius thought it was a good marketing idea to hire a (handsome) big-name star and hide him this way?  Granted, this is not the first time Depp has made this kind of choice (think SECRET WINDOW, in which Depp spends most of his screen time in a bathrobe), but others (the director, the writer, the publicists, for God’s sake!) should have had more sense.

The other members of the cast—Rebecca Hall (really starting to like her), Paul Bettany and the ever-sturdy Morgan Freeman—do their best to flog a flagging pace.  No one can blame them when the plot veers into, first predictable, then sigh-worthy territory.

So Depp’s character, Dr. Will Caster, his scientist wife Evelyn (Hall) and his partner Max (Bettany) are close to a breakthrough on their independent search for the key to “the singularity”—self-aware artificial intelligence.  But tragedy strikes when Will is shot by anti-tech fanatics.  The bullet only grazes him, but it turns out to be laced with radioactive polonium, sentencing Will to a lingering death (and also conveniently giving his loving wife enough time to plan what comes next).  Over Max’s quite sensible objections, she insists on finding a way to “upload Will’s consciousness” to the AI machine they’ve been building in an isolated warehouse.

No.  I don’t know where they get their money.  They’re independent, okay?  And the uploading is apparently accomplished by having Will read the dictionary into the computer.  And other stuff.  With wires into his brain.  The upload is almost complete, but then Will dies. Cue violins.  But wait . .
.
Anyway, the experiment works, but anyone who has EVER read a science fiction story or seen an SF movie can tell you what happens next.  At first, things are great.  Evelyn is over the moon that her husband is “alive”, albeit in the computer.  Max, as the voice of reason, is freaked out.  “It’s not him,” he insists, though no one mentions the word “soul” in the entire movie.  Really?

The machine/Will starts performing miracles—reviving the dead, healing the sick, the halt, the lame.  He has plans to heal the Earth, to change the world.  I’m in the audience thinking maybe we need an all-powerful machine/guy.

But, of course, there’s a dark side.  Those he heals are forever “tied” to him, bound to do his bidding, for good or ill.  There are a few inconvenient deaths.  **sigh**  Max tries to run, then colludes, first with the anti-tech extremists (who seem to use a helluva lot of tech themselves), later with the government, to bring Will/the machine and Evelyn down.  Eventually even Evelyn is frightened by Will’s power and the final betrayal is set.

Turns out, though, Will’s not the only one about to be betrayed.  Evelyn and those of us in the audience who might still have wanted to like this movie are about to take one upside the head.  In the climactic scene, Evelyn talks with Will/the machine, trying to convince him she’s ready to “become one” with him (when really she’s the delivery vehicle for a destructive virus that Max has engineered, which, by the way, will shut down all computers everywhere in the process).  He reminds her that he, Will, never wanted to change the world. He just wanted to do the research. That was her dream.  Some part of her consciousness was somehow transferred to the machine in all that frantic programming at the end of his life.

Nice.  So now Evelyn gets blamed for all this.  Not his ego, his lack of emphathy or his lack of social skills (all pointed out in the early part of the film), but her idealism and warm heart.  The machine is a megalomaniac ’cuz she’s a girl.  Right.  Thanks.

And the worst part?  That just makes her want to save him!  That’s not surprising--she’s done all of this because she loves her husband. (The film could easily have been SFR, but there’s no clear romantic arc, and it obviously doesn’t end well.)  But as things often go, someone gets trigger-happy, Evelyn is shot, Will has to upload her to try and “save her consciousness” and the virus takes them both, along with all our iPads, PCs, Androids and other fun toys. Oh, and the essential stuff—would we really want to do without medical or flight computers? Not that we’d need them after the financial collapse.  Pfister only hints at this apocalypse by bracketing his tale with scenes of mild dystopia, a shopkeeper propping open a door with a keyboard, for example.

What are we to think, exactly?  Is it worth the destruction of everything to save our humanity?  Or might we be better off transcending our mere human status into something more?  And what about God? Interesting questions.   Too bad they're lost in this muddled cinematic presentation.

--And as for women in SF—yes, we’ve always been here, we’re still here, we will always be here!  Whatever style of SF/SFR you write, make it your own and, when necessary, blaze a new path.  Others will be there to help you on the way and still more will follow behind.