Of course I don't really know for sure (yet) that they got this epic science fiction masterpiece right in a motion picture format for the first time in, well, history...but if the trailer gives any indication, fans, we're in for a total sci-fi phenomenon.

See for yourself. (And listen closely for that epic soundtrack. You might just have heard it before.)

It's all there. All the epic feels. The cinematography. The sense of struggle against impossible odds and destiny with a glistening edge. This brought the same visual imagery that I imagined in my head decades ago when I first read the series anchor novel by the late Frank Herbert. 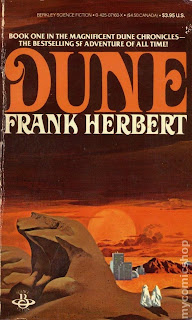 And much of this was shot with actual sets--not bluescreen!--to add to the realism and tangible sense of place.

And that soundtrack I mentioned? Yeah, that's Pink Floyd's Eclipse. Like I said. Epic.

But these glowing first thoughts come with just a hint of reservation. There have been many, many years and two less-than-stellar attempts to capture the essence that is Dune on the big and small screen and both, in my humble opinion, fell far short of the goal.

This trailer gives me hope that maybe, just maybe, they finally did it.

If you're interested in what the (freaking stellar) cast has to say, you can view this interview with the main actors conducted by Stephen Colbert below. (Unfortunately, the *bleeping* commercials take a lot away from the continuity, but it's worthwhile to hear their thoughts and emotions about this monumental undertaking, all the same.) While I admit Stephen Colbert is not my favorite television personality, his enthusiasm for Dune in this clip is undeniable and palpable.

Dune is slated to arrive just before Christmas 2020. Definitely a present I wasn't anticipating that will make my 2020 holidays very bright. And it would be so fantastic to see the wreck that is 2020 go out on a truly awesome cinematic note.

What do you think? Excited? Hopeful? Skeptical? Let me know in comments.