We're in the Final Countdown! 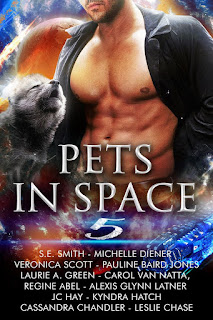 I've been sharing news and previews all year, but now I'm super excited that release day for Pets in Space® 5 is next week. Next week!

This anthology has been firming up over the last year-- and what a year it's been? KnowwhatImean? We can't wait to "unleash" this latest Pets in Space® collection on the universe. (See what I did there?)

Today I'm going to share my impressions of one of my peers' stories, because now that I have my advanced copy, my read-through of the collection (which, by the way, is massive!) has begun. I can tell you right off the bat that this volume is looking to be ah-maz-ing!

Here's my take on one of the stories and more information on the other works in the volume to give you a closer glimpse at the collection.

Rescuers Taz and Rylando can’t let their forbidden attraction get in the way of saving lives. When a planetary disaster turns deadly, can they save an entire town... and each other?

Subcaptain Taz Correa, telekinetic talent and first-responder in the military’s underfunded and overworked Galactic Search and Rescue division, hides her unprofessional attraction for teammate Rylando and his unorthodox team of animal assistants. When catastrophe strikes a politically important town, Taz, Rylando, and his animals are the only rescuers left to respond.

Subcaptain Rylando Dalroinn loves his telepathic connection to his animals, but wants a heart connection with teammate Taz. Unfortunately, not only is it against the rules, but he doesn’t know how to tell her. And in GSAR, rescue missions always come first.

Kaz lives her worst nightmare when trapped underground with the animals in a hidden room set to blow sky high. Everything Rylando loves is in peril, and now he’s at the mercy of people who aren’t just victims.

If Taz, Rylando, and the animals can’t find their way to save each other fast and neutralize the threat, the whole town will become a disaster statistic. 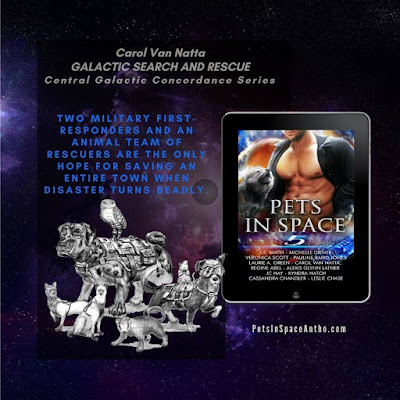 I decided to read this story first because I was intrigued by the rescue team aspects (especially involving K-9 and OtherCreatures-9 team members) and pseudo-military details that I tend to relate to.

I found the world-building and situation-related politics in this high-risk rescue mission very detailed and realistic. The scenes involving their work were wonderfully detailed without sacrificing the pace, and the team makes use of some extremely sophisticated future tech.

The rescue team at the center of the story involves two characters that are very relatable and authentic in their thoughts and actions, as well as the other members of their team--one human and an array of clever, talented, well-trained--not to mention lovable--creatures (and by lovable, I mean you just want to throw your arms around them and hug them to pieces) who work with them. In spite of their competence they have been dropped into a situation that is impossible, at best, as forces of corruption, greed, animosity and other undisclosed motivations--as well as nature itself--threaten to bring them down.

I can't wait to dive into all the other stories!

Here's a quick run down of what's in store in the eleven other Pets in Space stories.

THE KING’S QUEST
Dragon Lords of Valdier Series Short Story
by S.E. Smith
A playful trick leads to love for a Goddess, but will the King she falls in love with accept her for who she really is?


DARK AMBITIONS
A Class 5 Novella
By Michelle Diener
When a planetary exploration trip takes a dangerous turn, a human woman and her powerful AI friend will need all their skills to come to the rescue.

STAR CRUISE: RETURN VOYAGE
The Sectors SF Romance Series
By Veronica Scott
She survived the worst interstellar shipping disaster in history as a child but can she survive the RETURN VOYAGE as an adult?

GENERAL’S HOLIDAY
Project Enterprise Series
By Pauline Baird Jones
A General is ready for another fight—this time for the woman he loves.

JUGGERNAUT
The Inherited Stars Series
By Laurie A. Green
A security commander must decide if she can trust a mysterious stranger and his bioengineered StarDog when the secret underground site she protects is threatened.

REAPER
Xian Warriors Series
By Regine Abel
With time running out, a woman accepts her fate only to find hope in the genetically engineered warrior created by her captors.

PASTFINDERS
Starways Series
By Alexis Glynn Latner
A woman’s psychic gift might be the catalyst needed to save the life of the man she loves—in an ancient archaeological site that contains a stupendous discovery.

MITTENS NOT INCLUDED
TriSystems: Smugglers Series
By JC Hay
He craved order and discipline to help his life make sense. She offered him cats instead.

FINDING MOGHA
Before The Fall Series
By Kyndra Hatch
A human’s effort to save a sentient being takes her straight into the path of a Korthan warrior.

RATE OF RETURN
The Department of Homeworld Security Series
By Cassandra Chandler
Falling for an Earthling sends an alien and his adorable, six-legged pet in a tailspin.

GLITCH
Crashland Colony Romance Series
By Leslie Chase
An alien pirate and a human find love in the shadow of disaster.

I'll be posting further story commentary on my website blog in the coming week if you want to read the follow-ups there: Laurie A. Green - Escape to the Stars

Please remember our charity, because 10% of the royalties for all pre-orders and the first month's sales will go to support Hero-Dogs. This organization raises, trains and places--free of charge--service animals with disabled veterans and first responders to improve their quality of life.

Our anthology is all about how pets can enrich the lives of our characters, but can you imagine what a difference a real life service dog and trusted companion can make in the lives of those who have sacrificed to serve their country and communities?

This is your chance to make a difference and enjoy several great reads in the bargain.

You can pre-order Pets in Space® 5 now so you're one of the first to get it on release day and have your purchase count for Hero Dogs! You can read more and find all vendor links on the Pets in Space website << by clicking here.

Email ThisBlogThis!Share to TwitterShare to FacebookShare to Pinterest
Labels: Hero Dogs, Laurie A. Green, Pets in Space 5, The Final Countdown