Just over a week ago, I was struck by inspiration. For the past two years I've seen holidays come and go, without ever once being inspired to write something with a holiday theme, even when tempted by submission calls. The ideas just weren't there. And as a scifi author, somehow, I found it hard to visualize the holidays we celebrate now once we've moved out beyond our own system to new worlds. For example, the times for the solstices will change with the planet. Our calendars may have to change to fit with these new worlds. And when we've traveled to new continents, such as Europeans arriving in what is now the USA for example, a new holiday was born - Thanksgiving. Invasions have brought in new beliefs and new celebrations, or genocide has eradicated the previous ones. Will we give up our old traditions and holidays for new ones on new planets? Or will we already have left such things behind?

But after making a couple of notes on my smartphone about a book title, and a couple of vague ideas for a character, muse suddenly took off with an idea for a Halloween story. And it wasn't science fiction. Muse wanted to do a PARANORMAL story! *gasp* Now, look, I have nothing against paranormal. But it isn't something I've read a lot of, nor had I ever considered writing it. I know paranormal is very big still, and I don't want to look like I'm jumping on the bandwagon. I somehow doubt that one paranormal short is going to increase my fanbase any. But that was the way muse wanted to go, and I've learnt to let her have her way. Even though I still have two projects I set myself to finish this year.

In six days, I put out 11K words, and finished the story. Not only had I written a new-to-me genre, but I did it linearly from start to finish, with only the odd pause to research. I couldn't quite believe it. I'm not intending to try and put this out for THIS Halloween (I am not going to rush something for the sake of it even if it does mean sitting on this story for ONE WHOLE YEAR! *shudders*), but the whole thing was done in just six days. That's 1.833 words a day. At that rate, I could do NaNoWrimo. I could put out a novel a month. A longer length novel every two months. If only! Sadly it doesn't work like that (or at least not for me).

But the research was fun. After looking into what happens to bodies exposed to vacuum and theoretical anti-gravity systems, I was reading up on the history of Halloween and the different varieties of fairies and sprites. I still got to do a bit of science by looking up the composition of a human body and using my knowledge as an analytical chemist to work out what household chemicals could be used instead, converting chemistry to alchemy. That particular inspiration came from Sir Terry Pratchett in the Wintersmith, where the spirit of winter attempts to make itself into a human for love -

I wasn't able to find out if this was an older rhyme used in the book or an original piece by Pratchett - an interview with him suggested it was from somewhere else and he'd rewritten part of it, but I've found no other evidence. So, in terms of chemistry, these are the elements that make up a human body (this is a very basic list) -
Elements in the Human Body (about.com)

For greater detail, there's a comprehensive break down on Wikipedia here.

The great thing is I can now spend the next year planning how and when I'm going to release it, what I'm going to put in the back of book info, and getting it edited without the pressure of time. Next Halloween, I will have my first holiday-themed story available, and I'm really excited! I'm keeping the title under wraps for now (shh!), but here's a rough graphic of the cover I'm working on. What do you think? 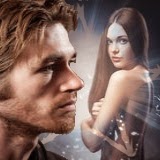 Having got the Halloween story out of my system, I'm working through the notes from my wonderful beta readers on Darkfall, in the hope of submitting this story before the end of November. I also have my unfinished sfr novella Revived on the list for completion by the end of 2013. This is connected to Terms & Conditions Apply, though it only briefly mentions one character from that story. I also received the first piece of artwork for Keir's Fall from my publisher, a tantalizing snippet of what's to come. I wish I could share but...nope. :P

Thanks to Cara Bristol, I discovered this really cool website that tells you how to kill people! Er, from a purely research point of view, of course. *cough* Medical Scene Writer.

This week several Brigade members are taking part in an If You Like event captained by Heather Massey over at The Galaxy Express here, recommending SFR titles to tie in with some of the bigger name books, films and TV shows. There's a huge range of suggestions, and if you hop over to Heather's, you can check out the master list to all the blogs taking part. I've already added more books to my teetering TBR pile as a result. :P

With thanks to Kyndra Hatch, the SFR Brigade blog is showing a sudden burst of activity, with Meet the Author Mondays, guest posts on Tuesdays, and recommended reads on alternate Thursdays. There is also the weekly SFR Brigade Presents blogging ring running, with snippets posted by various members of the Brigade. If you're interested in taking part in an interview for Meet the Author, please download the interview document from here and email it to me.If you're interested in providing a guest post, there's a list of suggested topics posted in the files in the Facebook group, and please speak to Kyndra Hatch about dates. We're also interested in book recommendations from other Brigade members for SF & SFR titles, and books on science, writing craft and marketing.

I'm taking part in the TRS Spookapalooza here from the 25th-31st October, and there'll be lots of fun posts and giveaways! I'll be showcasing a cocktail that happens to share a name with my male MC from Keir. Make sure you stop by to find out what. Gethyon will be part of a giveaway, along with a $10 gift card at Long and Short Reviews from the 28th October here. As part of Anti-Bullying Month in November, I will be donating my royalties from Gethyon to Childline for that month, as my male MC is himself bullied at the start of the story.

Laurie, thought-provoking post on why another galaxy - it certainly sparked a lot of responses.