Going somewhere else without leaving home 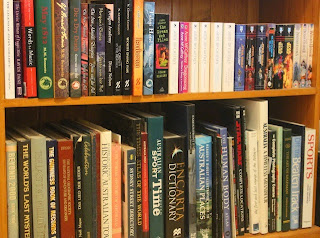 In these pandemic days reading is good way of going somewhere else without leaving home. So, I've picked up a few cheapies and freebies to add to the library. This post is about me as a reader, not a writer.

I riffled through the titles in my library and picked out a fairly new acquisition.

It was well-written, with an interesting premise but the author seemed to think I needed to know, in considerable detail, what everybody was wearing. Okay, I went along with it for a short while because people had to dress for the occasion. Think Cinderella's ball. You know how your brain bookmarks things? It might be a certain word repeated too often, or lots of sentences beginning with 'He'. And when you hit another one of those, your brain nudges you out of the story to say, "There's another one!" That happened in chapter four when a new character was introduced with a paragraph on the clothes he wore. Jolted right out of the story, I rolled my eyes and moved on.

This one I might go back to when I'm feeling more tolerant.

I picked out another book and dived in. After three paragraphs I kicked myself for not using the 'look inside' feature before I downloaded. I had to keep stopping to work out whose point of view we were in. It switched within paragraphs. I had to stop, re-read, think about it. Is that her? Oh no, I think it's him. Pass. Won't be going back to that one. Too much like hard work.

What about that one? It looked like a good mystery. The book started with an action hook, a fairly common ploy where something dramatic happens to hook the reader, in this case a gun to the back of the head. I confess I don't much like this approach. Something happens but I don't know who to and why, therefore why should I care? This was no exception. The next page or two was devoted to why this individual had a gun stuck to her head and I had a hard time processing the time line. After that, the next few pages were back story disguised as thoughts but very little action. I wasn't sucked in, you see. I was being asked to work too hard before I was completely engaged. I might have another go with this one. It was well-written, with a good voice but certainly didn't suit right now.

By this time I wanted a sure-fire success, so I went back to books I'd already read. I ended up with Linnea Sinclair's Finders Keepers, one of her early SFRs. I'd read it so long ago I'd forgotten the story. Hurrah!

I loved it all over again. It's absolutely my kind of read. A spaceship that wouldn't have been in good enough condition to even make it into Star Wars's Rebel Fleet, a gutsy heroine and a hunky hero. The premise – he crash-lands on a planet where she rescues him – has been around forever. But the scene where he comes back to consciousness hasn't. It's nothing short of brilliant 😊.

The opening scene which sucked me right in introduced Trilby and placed her into a setting. I got to meet her spaceship, her obsolete droid, and the dangerous planet where she was sheltering. Then she watches the fighter crash through the atmosphere and into the nearby jungle. It's an alien ship and, expecting the pilot to be dead, she goes to the site to scavenge some parts. But the pilot is not alien and he's not dead. She brings him back to her cavern hiding place. It's all so tactile you can close your eyes and see it, smell it, feel the sweat on your skin.

Like any romance, you know how that part of it will end, but it was so much fun going along for the ride, through the highs and lows of fights, a space battle or two, and a possible relationship. It's action-packed, filled with twists and turns – the perfect read to take me out of myself. 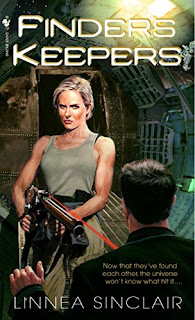 Independent trader Trilby Elliot is making some not-quite-legal modifications to her starfreighter, when an unexpected visitor falls out of space. Literally. He’s crashed onto the uninhabited planet of Avanar in a crippled ’Sko fighter–the last place you’d expect to find a Zafharin military officer because the ’Sko and the Zafharin have been at war as long as Trilby can remember.

Rhis Vanur is your typically arrogant Zafharin. But to Trilby’s surprise, he doesn’t look down on her or her slapdash ship. Still, Trilby’s learned the hard way that even though she found Rhis, she can’t keep him. She’s just a low-budget jump jockey as far as men like him are concerned. She’s not falling for his offer to help…until Port Rumor reports her best friend missing and Trilby learns that the ’Sko are hunting both her and Rhis. Now they’re in it together for better, for worse–or till death blasts them to oblivion....

I had so much fun reading Finders Keepers I might go back and read Gabriel's Ghost. It starts off with one of those action hooks I don't like, but I persevered the first time. I might like it better this time around.

And in one of those remarkable cases of serendipity, no sooner had I written this post than I came across an ad for an online class - run by Linnea Sinclair. Here's the link. Scroll down to find the course.It's $15 for non-members, free if you join. I've done some of Linnea's courses. She's good.