The evolution of a character 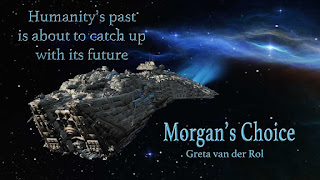 I used to be a computer programmer. That was before the much sexier vocation, 'software engineer' entered the vernacular. Whatever. I earned a living by building information systems. But I'd always had a penchant for writing and making up stories. I have a BA(Hons) in history, earned back when a BA still had some value and I enjoyed writing.

When I finally retired from the stress-filled rat race I decided I'd write a book. Because I have that sort of mind set, I wanted to learn how before I started. I came across a course that both taught and offered a level of mentoring – during the course, you'd write your own book submitting some chapters for evaluation. It sounded perfect to me so I enrolled.

After a few weeks of working through the course, I threw the virtual manuscript at a virtual wall.

The problem was the protagonist, a woman who could interact with computers with her mind, sort of like… magic. With my IT background, that didn't really appeal. And I didn't like the setting. It was all too… fairy tale in space. And slow.

I set about creating a cyborg – although I didn't know it at the time. Her name was Morgan and she had a supercomputer in her head. She was feisty and difficult and exceptionally good at what she did. She also hated, loathed, and detested Authority – especially admirals. She hadn't been asked about that computer in her head, or the (slightly faulty) artificial eyes that allowed her to see like a human (and more) and interface with a computer. (They're silvery, unlike her peers, who have ordinary, human-looking eyes) She was a supertech, whether she liked it or not, modified at birth, and dragooned into the Confederacy Fleet's academy. Supertechs created all the apps in her universe and kept the Fleet's warship systems going. They themselves were strictly controlled so that never again would artificial intelligences threaten humanity. For that reason, Supertechs were supposed to be subservient, obedient individuals who did what they were told. If they strayed from the path – well – they were exterminated.

That was the beginning of Morgan Selwood. I wrote a short story about Morgan's first posting after she scraped through her academy training. It's called Supertech.

Morgan's Choice ended up being the first of five books set in her universe. You'll find them all here, along with three short stories. 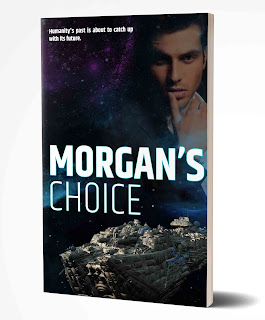 Somewhere out in space, humanity’s past is about to catch up with its future.

When Morgan Selwood’s spaceship is stranded in unknown space she is relieved to be rescued by humanoid aliens. But her unusual appearance and her extraordinary technical abilities mean that everybody wants a piece of her. Who’s it to be? Autocratic Admiral Ravindra, who press-gangs her to help against a shadowy threat from the stars, or the freedom fighters who think she’s a legend reincarnated, returned to help them throw off the yoke of oppression? Stay safe everyone. These days in America it means more than wearing a mask and washing your hands.

Morgan doesn’t much care which it is until the uprising and the atrocities start. While civil war rages across the planet the shadowy threat from the stars emerges as an implacable killer bent on destroying all intelligent life. Morgan will need every bit of her superhuman, bio-engineered intelligence to save the man she has come to love and his people from annihilation. And spare a little to save herself.

For the month of June only, you'll be able to pick up Morgan's Choice at 30% off the retail price. It's one of a ten-book SFR bundle being offered through Book Funnel – and you'll need to be willing to buy with Paypal.

Stay safe everyone. These days in America it means more than wearing a mask and washing your hands.