Distant travellers from the depths of space 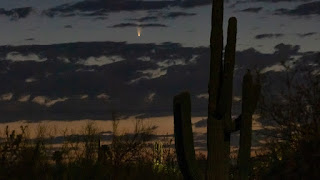 My Facebook feed has been sprinkled with photos of our most recent celestial visitor, comet Neowise. As I'm sure most of you know, comets are basically dirty ice blocks, formed in the Oort cloud in the distant outskirts of the solar system. Something, probably gravitational forces created by the many bits and pieces also in the Oort cloud, triggers them into a closer approach to the Sun, which captures them in an elliptical orbit. As a comet approaches the Sun, the solar wind blasts off fragments of its substance, creating the distinctive tail. It's only a tail as it approaches the Sun. When the comet swings around and heads out back to where it came from, the 'tail' precedes it, a bit like a bridal party preceding the bride.

Many comets grace the night sky once and are never seen again. Some plunge into the sun, others graze past the sun and hurtle off into deep space, others disintegrate. Neowise is one comet that will actually return. Mind you, I don't think I'll be around to see it. Its orbit is 6,766 years.

So, if you live in the Northern Hemisphere, take your chance to see Comet Neowise while you can. Its closest approach was 23rd July, so that will be as bright as it gets. However, please don't go looking for a blazing object like the above photo. That's a long exposure taken through a camera. In fact, Neowise is barely visible to the naked eye. Take a good pair of binoculars to a dark spot where the light pollution is minimal and look for it near the Big Dipper. A few hours before dawn is apparently best.

Neither the Big Dipper nor Comet Neowise is visible to those of us who live in the Southern Hemisphere. Still, I've seen a few comets in my time. The best was Comet McNaught in 2007. It was what's known as a Great Comet – that is, a really bright, spectacular comet visible to the naked eye. McNaught was a cosmic surprise. Astronomers were astonished at its size. I was living in the country, well away from the bright lights of Melbourne but even so, the comet was low in the night sky. We drove to a dark place with a distant view towards the sea and saw the comet. I took a photo with a Canon 20D using a 500mm lens and here it is. 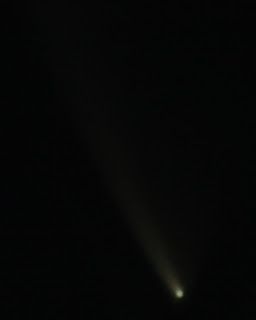 The pros can do a better job, though. This photo is also of Comet McNaught, also taken with a 20D.

Here's a page full of amazing photos of McNaught. My favourite is the one taken on Australia Day 26th January, 2007. There's a crowd on Cottesloe Beach watching the fireworks on the left, while a storm chucks down bolts of lightning on the right. Comet McNaught still shows up between them, the tail clearly visible.

I've also seen the most famous comet in history – Halley's comet. The great astronomer, Edmund Halley, worked out that the comet seen in 1531, 1607 and 1682 was actually the same body, reappearing in the sky at an interval of about 75 years. The comet even appears on the Bayeux Tapestry. 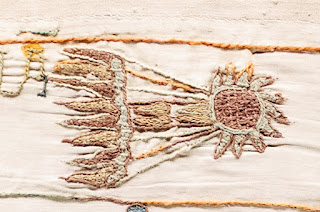 However, it has done its orbit many, many times. The Chinese observed it in 239BC and it's thought the Greeks would have watched it in 466BC. (This article will give you all the details about Comet Halley). Its most recent return to our skies was in 1986. Halley was visible to the naked eye but only just. Let's face, it's done the circuit many, many times and each time, a little more of its substance is vaporized. I can't imagine what it would have looked like in 466BC, before the days of light pollution.

I was living in Perth, Western Australia, back then. I drove up into the hills that border the city to the east to find an elevated location with good, dark skies away from the bright lights on the plain. I took my 73-year-old mother with me, figuring it would be the only chance either of us would have to see this celestial visitor in our lifetime. I took a pair of powerful binoculars with me. As I've intimated, Halley was fairly hard to spot, even if you knew where to navigate. I gave my mum the binos and pointed.

"See that bright star there? And that one? Look between them."

I rolled my eyes. "Try again. A bit higher."

We messed around a few times, each time eliciting a 'meh' response. I knew she'd seen it when she simply said, "Ooooooh."

Yes, I know you can see the comet on the TV. But there's nothing quite like seeing one for yourself. There's something truly awe-inspiring to look at something that has travelled billions of kilometres from the unknown depths of space. Small wonder that the Ancients thought they were portents of disaster or change.