One of my lesser known projects is a huge departure from the Science Fiction Romance genre, a generational historical novel set mainly in New Mexico and spanning its Spanish and Mexican colonial eras, tentatively titled This Far, Wild Land. In doing the research many years ago (with much more still to do), I sought out a novel that presented a multi-layered slice of Hispanic history and culture in our state. It was a coming-of-age story written by Rudolfo Anaya titled Bless Me, Ultima. 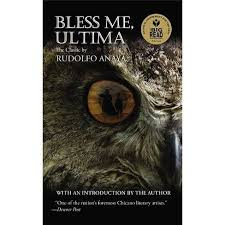 This wondrous story of New Mexico just after World War II--a time of great societal and technological shifts--presented a cultural clash between the old traditions and folklore that often carried a mythos of their own and more modern thinking.

Bless Me, Ultima was first published in 1972, but has had it's share of controversy. At the center of the story the conflict with Ultima, a curandera (a healer or shaman), who is declared a witch by those who don't understand her long traditions, was labeled as "profane" and "violent" and even banned in some school districts with a large percentage of Chicano students. (The story hedges into some somewhat paranormal or "magical realism" elements, as well.)

The story made me a huge fan of Mr. Anaya. I seldom read outside the SFR genre, but Bless Me, Ultima held my fascination in the same way that The Milago Beanfield War did as a cinematic milestone in historic Chicano culture vs. modern progress.

If you'd like to get a better sense of the man and his work, here's a short 2+ minute video titled Meet Rudulfo Anaya produced by Open Road Integrated Media.

Sadly, Rudolfo Anaya passed on June 28th at age 82 after a long illness, and his contributions as one of the most renowned Chicano writers made his passing a major news event here. Many of his works focused on the roots of his culture, and although he was probably best known for his nationally acclaimed bestseller, Mr. Anaya had written over 40 books including children’s books and plays. He was identified as one of founders--and "the father"--of the Chicano literature movement and his work is taught all across the US.

In Albuquerque, Anaya’s influence is obvious. A library and an elementary school are named after him, and October 30th is designated as the ‘Rudolfo Anaya I Love to Read Day’ to promote literacy awareness throughout our state.

“Who would have known a vato from Barelas would have made the wall of fame,” said Rudolfo Anaya about himself in 2014, poking fun at his success as he was being inducted into Albuquerque’s wall of fame. (Vato loosely translates to "dude" or "homeboy.")

Rudolfo Anaya was born in Pastura, New Mexico, and raised in Santa Rosa. His father was a vaquero and his mother’s family were farmers. Anaya went to Albuquerque High School and graduated from the University of New Mexico earning his bachelor’s and master’s degrees, later becoming part of the UNM English faculty.

“I think it was natural to write about the people, the place, the culture, the traditions and that’s where I’ve stayed basically,” Anaya said in a 2014 interview. “This is what I write. I write New Mexico.”

Bless Me, Ultima was made into a feature film that debuted on my birthday in 2013 and Albuquerque’s National Hispanic Cultural Center plans to make his novel into an opera. Here's the trailer for the movie:

Though I didn't grow up in New Mexico, I fell in love with the state at first sight, and later envisioned an epic fictional journey through the New Mexican historical landscape via a novel. My way of honoring the state I long ago adopted as my home and a way to tell a tale of its dynamic history that very few know about.

If I ever get my enormous saga to the point of being published, Rudolfo Anaya will definitely be included in my acknowledgements.

Hope you enjoyed your 4th of July weekend. Have a great coming week.