Music To SFR To #amwriting #inspiration

I've always talked a lot about how much music inspires me, and in fact how I couldn't live without it. I miss a day with no music. In the past three years I've been privileged to go to several concerts featuring my two most favourite bands - The Rasmus, who inspired so much of the tone and feel in my Keir series and got me writing again, and Starset who have now become my favourite band to write to, and who I never expected to ever see in concert in the UK. I've now seen them FOUR times, twice as support and twice in their own right on tour. I saw them in February as headline, and each time I think I've already seen them at their best, they just set the bar higher again, with a super appropriate change of image and a set of songs that fit with our current pandemic. 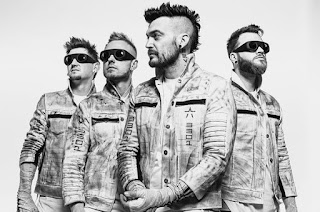 While The Rasmus still take full credit for inspiring Keir, Starset have definitely taken the top spot as my SFR muse. Why? Not just because I love their music and lyrics, but because to me they encapsulate what SFR is, or at least the kind I like to write. Star-crossed lovers, separated by space and time, galaxies colliding, telepathy, enslavement, end of the world stuff. And it's not just music. No, these guys have a novel and a graphic novel out too. They are all about the science, and the fate of humanity, travel to other worlds, and messages from the future. It's not just what they do, it's what they are. Wrap all that up in a song and a video, and I'm a happy space bunny. Just as an example, the video below has always reminded me of The Martian (or rather The Martian reminds me of this, since I saw the music video first).
Or if that doesn't light your fire, you could try Breaking Benjamin's Ashes of Eden (undertones of Passengers), Linkin Park's In The End (for a touch of apocalyptic), or The Rasmus with Justify (a very Keir song, lol).

Writing Update
So, since editing and publishing my Christmas story last year, I've been working on Redemption 2.5, the story my editor felt was missing before book three of the series. I'd always had a vague idea for it in my head, but it wasn't until the release of Starset's Vessels album helped me fix some frankly terrible elements in book three and turn it into something that might actually work that I felt I could do something with it. Despite slowly recovering from burn out and wanting to write again, working full time didn't leave me much...well...time! However, by the start of this year I felt I might be approaching a point with it where I was thinking about booking actual edits for it. Well, more the point of 'omg, this story sucks!!' But as things happen, my beloved editor posted a discount for edits booked and I took it as a sign. Redemption 2.5 was booked for a slot in June. I've now completed the first round, and while I was waiting for those I've finally finished a solstice scifi novella, tidied up an angel short story, and re-opened book 3. Seems I'm an all or nothing kind of person...