THE VAST OF NIGHT: ALIENS IN A SMALL TOWN

With theaters closed due to the coronavirus, it hasn’t been easy to keep up with my film reviews here on Spacefreighters Lounge. I do the best I can over on my podcast website, My Moviehouse My Rules, with reviews of television shows, streaming movies and such, but new films are not that easy to come by.

Streaming services have been a source of some excellent new films recently, though, that should be of interest to science fiction fans. This week I want to review one that’s right up my alley, THE VAST OF NIGHT, featuring weird lights and noises in the night, leading to mysterious disappearances from a small town. Next week, Charlize Theron heads up a supernatural action thriller helmed by Black director Gina Prince-Blythewood, THE OLD GUARD. 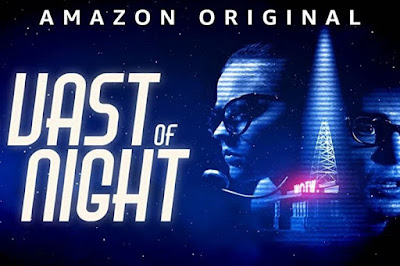 My love of science fiction started with Rod Serling’s The Twilight Zone, a show I had to watch at first through my fingers because it scared six-year-old me to death. By now though, I’ve seen all 156 episodes multiple times. That likely explains why I loved the indie science fiction film THE VAST OF NIGHT now showing on Amazon Prime.

Newbie filmmaker Andrew Patterson obviously meant his debut film as an homage to Serling’s seminal work. At the beginning of Anderson’s film, we see the show’s intro on an old TV screen in a 50s living room in black and white, then zoom in and become part of the action in color as we meet the protagonists: 16-year-old part-time switchboard operator Fay and fast-talking local radio DJ Everett.

The pair meet up at the Cayuga, New Mexico high school gym, where the big basketball game is about to start. It’s a small town, so they know each other, but it they also have things in common: a far-ranging curiosity, a nerdy interest in science and the developing technology of radio and sound recording, and, not surprisingly given the tiny town they live in, a desire to escape to the wider world.

While the rest of the town is stuffed into the gym for the game, the two of them head off to work, he at the radio station, she at the town’s switchboard. (Yeah, you remember, those things that used to manually connect phone calls.)

Soon enough, a mysterious humming sound is heard through the wires. Then calls start coming in reporting not only the weird sound, but high, possibly tornado-like winds, sightings of “things in the sky,” and so on. Fay tries without success to get the sheriff on the line. She calls other friends and family only to get cut off. Finally, she calls the only other person who might help: Everett. He agrees the sound is weird, records it, and sends it out over the airwaves, asking his listeners to call in if they have any idea what it might be.

Up to this point the film has been pleasant, but a little slow. But when a guy named Billy calls in to the radio station to tell his story, the movie gets riveting. In some ways, what happens in this part of the film works despite all the rules of modern filmmaking, because it relies not on the image we see on the screen, but purely on the voice we hear through the telephone line: Billy’s voice telling Everett, Fay and Everett’s presumed radio listeners about secret work details to cover up evidence of UFOs during his military service. Details that occurred not far from their New Mexico town, work that made him fatally ill and involved only black and Hispanic soldiers because no one would believe them if they eventually told their stories.

We never see Billy as he’s talking; we only see Everett’s reaction in the dim radio studio, Fay’s reaction at her switchboard. But as I watched, I found myself hanging on every word, as if I were listening to the broadcast late at night on a transistor radio under my pillow, chills running down my back. The effect was remarkable, and I was in a well-lit living room. I can’t imagine what it would have been like seated in a dark theater, or in a drive-in, which is how this film is being distributed widely during the pandemic.

Billy’s call leads Fay and Everett to further hard evidence of the mysterious sound, which he insists is made by something communicating back and forth, sometimes “at Sputnik level,” sometimes close to ground level. This “something” doesn’t belong to any military on Earth, of course, so that only leaves one conclusion, though it’s interesting the terms “UFO” or “alien” are never mentioned in the film.

Anyway, the middle of the film involves much running around, which seems a little overdone. Things improve when Fay and Everett get another phone call from a woman named Mabel, who claims to know what the mystery sound is. They rush to her house and arrive to hear the elderly Mabel reciting words in an unknown foreign tongue. She claims they’re an alien language, words that her infant son began spouting before he could even speak recognizably in English.

The boy was apparently a target of the aliens, going into a nonresponsive trance when the wind picked up and the mysterious sound could be heard, until she recited the alien words and he would snap out of it. Then one night the wind picked up, the sound came, and the boy, then nine years old, walked out the front door and disappeared. Mabel found his footprints in the yard—they went so far, then ended, as if he’d been plucked off the ground from the air. “They took him,” she says.

Now, it would have served Fay and Everett well to listen to Mabel, since her experience is not only relevant, but acts as a nice bit of foreshadowing here. Alas, they think she’s been driven crazy with grief. And, to be fair, filmmaker Anderson sets up the scene so his audience, too, dismisses the old woman’s testimony. At the risk of giving him too much credit, he may be making a point about how society discounts the living witness of its women and its elderly. At any rate, the last third of the film is no surprise if you’ve been paying attention to the first two-thirds. I won’t go into the details out of respect for those who hate spoilers. Let’s just say it’s a satisfying, if predictable, ending from that point of view, though it provides few explanations for what happens.

Anderson did well with his first film effort, taking honors at the Slamdance Festival (the indie film sister to the Sundance Film Festival); the Toronto International Film Festival, the Overlook Film Festival and several others. And critics have loved it, giving the film an overall 85 percent Metacritic score and a 92 percent Rotten Tomatoes score. Though some of the film shows Anderson’s inexperience, a few scenes show genuine brilliance, including one nine-minute single-camera tracking shot that would do 1917’s Sam Mendes proud. You can catch THE VAST OF NIGHT on Prime Video for free if you have that streaming service—or maybe at your local drive-in if you get really lucky. And you can hear my expanded review of the movie on my podcast at My Moviehouse My Rules anytime.