Action-adventure with a romance thrown in 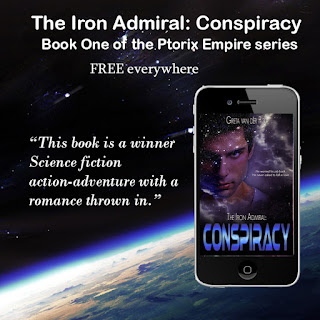 The Iron Admiral books were among the first I ever wrote. Some people love it, some people hate it - it's a 'love at first sight' story about a disgraced admiral and a woman with knowledge and abilities regarding the alien Ptorix that a admiral could only dream about. And she's beautiful, and desirable as well.

This is a snippet from Conspiracy, where Saahren and Allysha, on the run after trying to escape, are getting to know each other in a hidden garden. One of their first needs is food. But they're in luck.

Saahren strode over to a massive tree and gazed up at globes of red and purple fruit resembling festive decorations. A lazy insect fluttered its wings as it drifted around one of the ripest. "At least we’ll be able to eat."

Allysha hurried up behind him. "Oh, now wait a minute. How do you know we can eat them?"

He smiled down at her. "They’re mamangs. These trees are grown on many planets with jungle areas. My father used to grow them." Interesting. He hadn’t thought about his father for years.

She eyed the fruit hanging well over her head and his. "How do we get them down?"

"I’ll help you get into the tree and I’ll catch the fruit when you throw it down."

He made a stirrup with his hands. "Here. I’ll hoist you up to that first branch."

Balancing herself with her fingers resting lightly on his shoulders, she put her foot into his hands and pushed down. She slipped sideways. "I don’t think this is going to work." She leant into him and started to giggle.

The scent of her invaded his nostrils; her breast pushed against his chest and set his pulse racing. Fruit. Think about fruit. He dropped his hands and straightened up. "I think you’d better turn around."

"Okay. How’s that?" She stood next to him on one foot, one hand on his shoulder as he made a stirrup again, her foot grasped between his hands. She shoved down, trying to use his hands as a step but she ended up staggering against him, giggling helplessly. "That’s not going to work, either."

He sighed and knelt down next to her, leaning forward a little to hide his erection. "Sit on my shoulders."

She hesitated. "Are you sure? It won’t be a strain for you?"

"There’s not much of you. It won’t be a strain." And at least he wouldn’t be in such intimate contact with her.

She swung a leg around his neck and settled herself down, hooking her knees under his arms. He stood, muscles bunching under the weight. "Okay?"

"Fine." He wished he was. He could smell her, female and alluring, his hands on her smooth skin, her parted legs around his neck. "Climb into the tree." Please.

She grasped the branch and scrambled onto it, lifting herself with a foot on his shoulder. She turned around awkwardly and sat on the branch looking down at him.

"Go for the deep orange ones. Throw them down to me." He raised his hands, ready to catch.

She reached up, wrenched the nearest off and tossed it to him. The over-ripe fruit splattered as it hit his hands.

"That’s one we won’t be eating." He shook the sticky fragments away. "Do it gently or you’ll have to suck the fruit off my fingers."

Far too interesting. He imagined her lips around his finger, her tongue… Concentrate, Saahren.

And, of course, things carry on from there. It's free almost everywhere. Pick up your copy now. 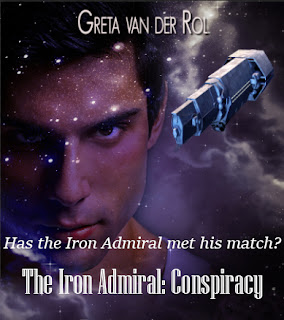 Amid rising inter-species tensions, brilliant systems Engineer Allysha Marten takes one last job to rid her of debts and her cheating husband. On the mysterious planet Tisyphor a security guard wins her trust and her affection. Together, they uncover a plot that threatens to plunge the Galaxy into inter-species war. As they scramble to prevent the coming holocaust, Allysha is horrified to learn that her new lover is ex-Admiral Chaka Saahren, the man the Ptorix call Chozhu the Destroyer, the man responsible for the death of her father, along with millions of other innocent civilians.

In a race against time, Saahren must convince Allysha to set aside her conflicted emotions about him to help him prevent the coming conflagration. And perhaps while he’s doing that, he’ll win back the only woman he’s ever loved.

FREE ebook at your choice of vendors