You have to have a powerful villain 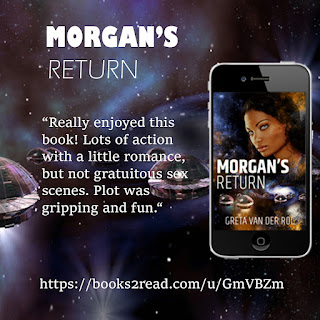 In any story where there's a hero and a villain, the two have to be at least evenly matched. It's even better if the villain is stronger than the hero. The stakes are raised and the hero has to work that bit harder to succeed. Take Harry Potter; we meet him as an eleven-year-old proto-wizard. Just as well Lord Voldemort is also in proto-villain mode, gathering his strength over time. It's only in book four, The Goblet of Fire, when he's back in shape, as it were. Then there's Batman and the Joker, Batman and Penguin, Superman and kryptonite in the hands of Lex Luther.

When I eventually got around to writing a sequel to Morgan's Choice, I had to come up with a villain to match, or surpass, Morgan Selwood. I suppose, in a way, Morgan is a super hero. She's a cyborg who can interface with just about any computer. She sort of has an AI in her head which can learn as it goes. But what's better than a supertech? I'd already done the ancient AI, Artemis, in Morgan's Choice. Where to from here?

I'd already decided that Morgan would be going home, back to where she came from when her spaceship malfunctioned and threw her into unknown space. She would be going back to find the origins of the Manesai society where she'd ended up, and she would be confronting some of her own past, as well. But what's stronger than a supertech?

Eventually it came to me. Another supertech. One that had gone rogue but had been smart enough to avoid being found out and eliminated. One that was jealous of Morgan.

Here's a snippet from the book.

Through the ships' sensors Morgan watched the station's locking arms retract into themselves like some sort of huge insect folding its limbs. She couldn't wait to get out of the place. Iniciara had been crossed off the one-hundred-places-you-must-visit-before-you-die list. What a stinking, messy, dump. She hadn't even liked eating the food there. Who knew where it came from? What it was? She bet the half of it was synthetic, made in a factory somewhere.

Curlew shuddered and began to move backwards. The station had applied enough thrust to push the ship out of the bay and into clear space, with the ship's systems controlling her drift so Curlew stayed equidistant between the docking bay walls. Beyond the bay, the station's slowly-receding bulk rose before them, a metal pincushion of ships, arranged in slowly-turning tiers.

Aft and forward side thrusters fired. Curlew pivoted, then followed a traffic lane to the designated jump area for Torreno. For Morgan, that really would be almost like coming home. She'd spent many a year on the Coalition's capital planet, some good, some not so good. Judging by the lack of traffic, Torreno wasn't a favored destination from Iniciara. Or maybe all the traffic for that destination had already left. Whatever. Space was a very empty place out here.

One last check of the sensors… Morgan's heart thudded. "Missile, coming fast, from starboard." She'd raised the shields before she'd finished the words. "Prepare for impact." They wouldn't be able to avoid the strike whatever she did.

The shields fairly blazed, crackling with power as the warhead exploded. Morgan hung on to her seat, grateful for the harness, as Curlew was flung across space. Warning lights flashed. Shields were down seventy percent. If she hadn't seen the missile coming at the last moment, they would have been history. Idiot. Fool. How could you be so complacent? And another tiny voice whispered, how could you miss it? How could you not have seen it?

Morgan, Ravindra and the rest of the crew go through  a series of adventures that will test all of them, including Morgan's relationship with Ravindra. He can get a tad jealous :) 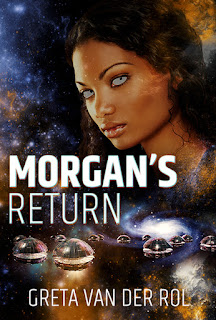 When you delve into ancient history you never know what strange forces you might unleash.

When Morgan Selwood and Admiral Ashkar Ravindra travel to Morgan’s Human Coalition to learn more about the origin of Ravindra’s people, their relationship is soon sorely tested. Morgan is amongst her own people and Ravindra is overprotective and insecure, afraid of losing her. But not everyone is keen to welcome Morgan home, not when they’d gone to all that trouble to get rid of her in the first place. Soon Morgan and Ravindra have a rogue Supertech on their trail with only one goal – kill Selwood.

Together, Morgan and Ravindra follow a tenuous trail back into humanity’s past, to the time historians call the Conflagration. But what begins as an innocent archaeological investigation escalates into a deadly peril for both humans and Manesai when Morgan and Ravindra are thrust into the middle of an unexpected conflict. And that rogue Supertech’s still out there, itching for revenge.

Buy the book at  Your choice of vendor

Space Opera/ Science Fiction Romance. There are some non-specific sex scenes. There’s action adventure and politics – and a little bit of swearing. That’s how Morgan is.