Thoughts on the Death of a Queen

Queen Elizabeth II was coronated as the monarch of England years before I was born, and her reign has extended through my entire lifetime--until a few days ago. I've never known any other ruler of England, except through historical readings, movies and television shows and documentaries.

I'd never met the Queen of England. My husband, having once been a member of U.S. Blue Devils Horse Platoon, had never met her either, though he once rode alongside the Royal Household Cavalry and has visited the royal mews.

That privilege, however, was afforded to his unit commander who rode in the Queen's Golden Jubilee celebration many years ago.

He related how prior to the ceremony, one of his fellow riders whispered urgently, "The Queen is right behind you!"

He turned and, after appropriate introductions were made, she asked, "And what is it you do with the Army?"

He replied, "I'm a helicopter pilot, Your Majesty." She answered that, yes, she had a few of those, herself.

Five days later, he had the distinct honor of saluting her on horseback.

He was later sent a thank you card for participating in the ceremony from the Queen herself, and on a later occasion, a more significant memento arrived when she gifted him a horse--Norman, a magnificent black, part-Shire gelding that stood over 17 hands tall and had once served in a royal capacity. (We often wondered if Norman had been named for General Norman Schwarzkopf -- a.k.a. General Stormin' Norman -- and that's why she saw fit to gift him to a member of the US Army who had ridden in her celebration.)

Norman is gone now, but he served as the unit commander's mount with the US Blue Devils for many years. And I can claim that, although I had never met the Queen, I did meet one of her horses. :)

Norman is pictured here during a ceremonial funeral parade for a fallen member of our military. He's the big, black horse on the back right and he has the unit commander on his back. I wish I could find a better photo of him! 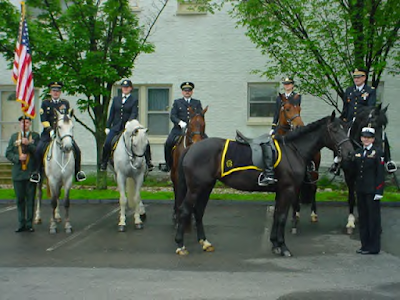 By the way, the horse pictured front-and-center acting as the mount with the boots turned backward in the stirrups to honor the fallen service member (ala the famous "Blackjack") is none other than our own Irish Sport Horse, Midnight Mission, better known as Velvet. She was David's Blue Devil mount for many years, and she was stabled in Michigan during that time. She knew Norman but had never met the Queen, either. :)

Velvet is retired now, and enjoys her days munching grass in the sunlit pasture with our retired Thoroughbreds and one Pintaloosa pasture ornament. These days, she's over 20 and looks more like an overgrown Shetland Pony than the regal Warmblood she once was. Yes, time does march on. 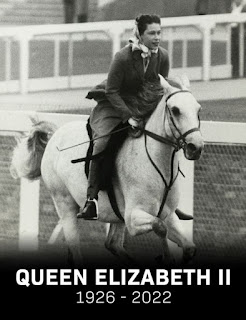 Queen Elizabeth II was a lifelong equestrienne and lover of all things equine. In her younger days, she was a skilled rider. She admired and cherished her Thoroughbreds, as do we, and was a fixture at Royal Ascot for many years. She even attended the Kentucky Derby on at least one occasion. So we did share the admiration of horses and I will always sincerely appreciate her support for the sport I love.

But what I'll remember most fondly about the Queen was her wonderful sense of humor.

On one occasion, during a trip to the United States in 2007, President George W. Bush made a blunder during the welcoming ceremony stating that the Queen had been present for our nation's Bicentennial "in 1776" (he, of course, meant 1976)! The Queen didn't miss a beat when she later gave a speech, playfully beginning, "I wonder whether I should start this toast by saying, 'When I was here in 1776...' That got a great round of laughter and applause.

When visiting the Chelsea Flower Show in 2016, one of the gardeners informed the Queen that lily-of-the-valley was once used as a poison. The Queen remarked, kiddingly, "I've been given two bunches this week. Perhaps they want me dead."

Queen Elizabeth II was also known for more sobering speeches. Many remember that the Queen received a lot of criticism after the untimely death of the beloved Diana in 1997, once her daughter-in-law, and the mother of her two grandsons. Her stoic silence angered many. When she finally did speak, she mentioned that this was a very private time for the family, and especially for Diana's two young sons, putting her silence in a new perspective for many.

In her speech about Diana's passing, she said: "She was an exceptional and gifted human being. In good times, and bad, she never lost her capacity to smile and laugh, nor to inspire others with her warmth and kindness. I admired and respected her -- for her energy and commitment to others, and especially for her devotion to her two boys."

Perhaps one of her most famous lines, now often repeated, she spoke after the terrible events of September 11, 2001. In the closing line of her speech she said, "Grief is the price we pay for love."

That quote has inspired me profoundly as I work on a scene in my Draxian Trilogy. I mentioned in another blog (When Journeys End, July 3, 2021) that the trilogy is a generational epic, and being generational, I sometimes have to wrangle with the death of a beloved character. In this case, the High Queen of a planet once known as Draxis, and what her death means to the society and to those who loved her.

Grief is the price we pay for love, indeed.

I've borrowed bits and pieces of Queen Elizabeth II's qualities for this character -- a sense of humor, an unbending will, a deep faith, a love of animals -- and, in particular, equines and canines -- and the face she must put on hardship, turmoil and tragedy as she leads her civilization into an uncertain future. Like any monarch, she must embrace -- and sometimes struggle with -- ancient tradition. And sometimes she must make a daring and emboldened stand for what she believes is right.

Not everything she does or says is popular. Sometimes it stirs anger, resentment or outrage, but in the end she does what she believes is best to serve the people of Draxis. Because she understands that being queen is an honor that is all about service to the citizens, and not about personal gain, royal privilege or financial enrichment.

In her Christmas broadcast in 2008, Queen Elizabeth II probably summed up this high queen's feelings quite eloquently:

"When life seems hard, the courageous do not lie down and accept defeat; instead, they are all the more determined to struggle for a better future."

In my trilogy, there is a reference to the monarch of England -- one I wrote long ago when I was first began penning these stories.  In it, there's a direct quote that makes reference to "His Majesty." That line was meant to remind readers that parts of this story take place in the future, but probably within the lifetime of most readers. That phrase makes homage to the fact that the reign of Queen Elizabeth II would eventually come to an end, but that one of her male descendants would rule after she was gone. Though I had the exact descendant in mind, I never named him. I'll leave that up to the future -- and my readers' imaginations -- to fill in the blank.

I'd like to close with something that happened in the last week that, in hindsight, seems almost 'meant to be.'

More than a week ago, I stumbled across an ad for some old British Metal figurines of uniformed British riders on horses. One was definitely a Royal Household Cavalry officer and the other was of a uniformed female rider. They were very reasonably priced -- and I thought they were kind of neat -- so I bought two of them for my husband as mementos of his days riding with the British units. During their transit through the mail system, Queen Elizabeth II passed. When the package arrived a couple of days after, I opened it to find -- to my astonishment -- that the female figure was actually the Queen herself(!), dressed in her royal uniform and riding sidesaddle on a black horse that looks a lot like Norman. 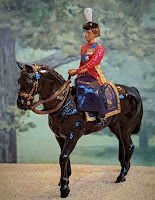 I believe either there was some sort of divine intervention that I was meant to have this memento or it was a very strange and wonderful coincidence, but whatever inspired me to find the ad and make the purchase, with no knowledge exactly what I was purchasing or what was about to transpire, I am eternally grateful. I'm sure I'll gaze at this figure often as I continue to pen this story about another noble queen...in a different time and a separate place.

If you have any personal thoughts on the passing of Queen Elizabeth II, her life, your memories of her, or the ceremonies and acknowledgements surrounding her passing, please share them in a comment. I do ask that you please be respectful.

Traveling on through history...