The new Star Wars story is a winner 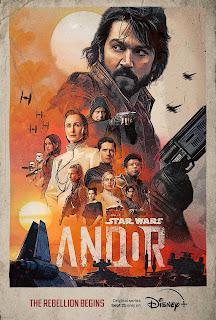 Andor, the new Star Wars story that traces the history of Rogue One's hero, Cassian Andor, has hit our TV screens in a three-episode introduction.

I've just finished watching Episode 3 and I'm grinning, which is a great sign. It's up there with The Mandalorian, offering new characters and (so far) not a light sabre in sight.

When we first meet Cassian he's looking for his sister. Cass is not a nice man, a thief and a dealer. Mistakes he makes end up with him being on the run in a setting which is industrial and seedy, rather like a futuristic junkyard where workers cut up spaceships for scrap.

It's an interesting plot dynamic, moving from Cassian in the present day back to Cassian as a child and his first encounter with the Empire. He comes from a planet with an area very reminiscent of the Amazon rainforest, which is being mined. As the story progresses, we find hints of a rebellion, though the word is never used, and at this stage, Cassian isn't a part of it.

I really like the depth of the setting. It's gritty and real, possibly a bit like Alang-Sosiya in India where they break down ships for scrap. There's no super villain, just a bunch of corrupt cops doing what corrupt cops always do. They're much better shots than storm troopers, though. I particularly liked the scene in the first episode where the officer-in-charge, old and wise, dismisses the charge against Cass. Unfortunately, he has to leave the idealistic young idiot holding the fort when he's called off-world to a meeting. And that's when things really start to happen.

There's a lot going on in this story. Who is the well-connected mystery man? What happened to Cass's sister? How has he acquired items he shouldn't have? I'll be sure to switch on, same time next week.