According to a 2022 Gallup poll, eighty-one percent of Americans believe in God. According to Wikipedia, worldwide religious adherents are 7.8 billion. While recognizing that ‘adherent’ does not necessarily mean ‘believer’, with the 2022 world population at 8 billion, it is safe to say that most of the world acknowledges some form of deity.

Yet, it is rare to see faith or spiritual observance reflected in contemporary fiction outside of a few narrow sub-genres. I suspect that mainstream contemporary fiction avoids spiritual topics because they can be so controversial. Science fiction has fewer boundaries, allowing the inclusion and exploration of faith and spirituality without the baggage of modern sensitivities.

The incorporation of faith can be as minimal as occasional references to The Lords of Space in VeronicaScott’s Sectors stories, or fuller blown as seen in the Badari Goddess who appears to various Badaris in both the Badari Warrior and Badari Gladiator series. Not only do I love the female persona, but also that the Badaris were stolen from their home world and enslaved, yet their Goddess finds them and aids them in their times of trial.

The use of the use the female to personify the ultimate spiritual power is also seen in Cara Bristol’s Alien Dragon Shifter series where an immortal priestess is the guardian of their Eternal Fyre; a collective of all their fyres (souls).

Marie A. Perez’s The Curse of Sotkari Ta series includes two contrasting belief systems with the patriarchal Arandans believing in a single deity while the contrasting Sotkari Ta seek The Farthest Light, which represents total evolution and perfection.

In a departure from humanoid deities, Alexis Glynn Latner’s Aeon Legacy series contains two ancient and powerful alien intelligences, one plant-based and the other pure energy. The humans who encounter them come away from the experience as if they had met archangels—powerful lieutenants of a greater force.

In all cases, the ability to incorporate spirituality or religion allows for greater scope in both plotting and character development, the different depictions as varied and fascinating as the stories. 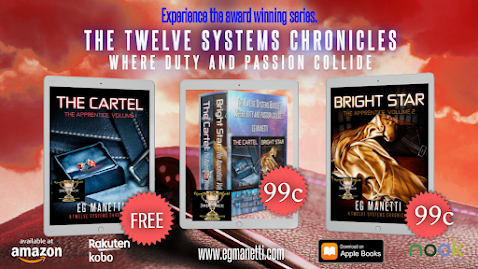 In The Twelve Systems Chronicles, the main character’s spirituality and spiritual growth are a central theme and source of her strength. The primary belief system is based on deified ancient heroes, The Five Warriors, and Adelaide. As a result, society reveres martial arts and even considers them a form of prayer. It was not an accident that when inventing this pantheon of six ‘gods’, three are female. Each of the six has a dedicated sect with a clerical hierarchy. While the sects are rivals and some ways, for the most part, they are cooperative and unified.

There is even a dissenting group that practice a more zen-like, pacifist spirituality known as the Universal Way. Considered odd by the mainstream and somewhat marginalized, this group has a profound impact on the successful resolution of several crises throughout the series. The stage is set for the importance of Lilian’s faith in the first volume, The Cartel, when she undergoes a formal rite where Adelaide’s symbol is tattooed on her hip.

By canon and custom, Five Warrior Rituals are open to the public. They are to be witnessed by any with an interest in the Will of the Shades. Only members of the warrior class receive warrior marks. At the dedication, the Warrior’s Mark is drawn in henna on a four-year-old child. A true tattoo is incised at the consecration.

Although she no longer holds warrior status, having been dedicated, Lilian cannot be undedicated. She is bound by tradition and faith to consecrate the bond with a rededication made of her own free will.

Chrys frowns. “I did not know one could be dedicated to Adelaide Warleader. I thought it was only the Five Warriors that accepted the dedication of their descendants and their retainers’ descendants.”

“It is a small sect but supported by the canons. There was some controversy when I was dedicated to her,” Lilian explains.

Chrys is ever curious about both Lilian and the ways of the warriors. “How so?”

Leaning against a console, she regards the far wall of the windowless chamber. “I was intended for the Fourth Warrior. At that time, I was the eldest and only offspring of the newly formed Grey Gyre Cartouche. It was my duty to demonstrate our loyalty to, and descent from, the house of Jonathan Metricelli. It was to have been an elaborate ritual.”

Releasing her regard of the wall, she searches her friend’s face.

Fascinated, Chrys nods his understanding. Lilian has never yielded so much before this. The ritual must be extremely important to her.

She continues, “Apparently, I became bored and wandered off. They eventually found me in the Adelaide Alcove. I was seated in the lap of the effigy happily singing to myself and playing with her warbelt. The keeper decided that Adelaide had called me to her. They dedicated me as I sat there. By the time anyone else knew what went forward, it was too late. What was done could not be undone.”

The prelate waits in front of the statue of Adelaide Warleader as Lilian moves to the center of the semi-circle.  “Do you come of your own will to answer the call of Adelaide Warleader? Do you become her true servant in this time and this place? To live by her discipline and listen for her voice?”

Lilian’s voice clear and certain. “Of my own will.”

Pulling the thorn from her belt, Lilian places it on her palms and bows at the statue. Straightening, she transitions smoothly into a series of rapid movements, the thorn flashing like a flame before her. The rhythm shifts and the flame becomes a flickering light before disappearing entirely for the final set of maneuvers playing in light and shadow. At the completion of the demonstration, she folds to her knees and places the thorn on the stone floor in front of the statue.

At this point, Chrys moves to the alcove entrance and places his back to it, crossing his arms. Trevelyan notes that the young man is easily able to block the opening with his frame. Chrys’ stance is casual and his smile unexceptional. His presence neatly breaks up the small group gathered to observe.

Trevelyan finds the young man also makes an effective screen. He cannot see beyond him into the alcove where, bared to the waist, Lilian is receiving Adelaide’s mark. Long moments pass before Chrys turns and reenters the alcove, where Lilian, still kneeling, raises her left palm, right hand holding her thorn. She makes a quick pass with the blade, leaving a red trail of blood forming on the raised palm. Rising, she cuts a silver coin from her belt and rolls it in her bleeding hand. Placing it on the altar, she says, “For skill in the discipline of attack.”

Freeing a second coin, Lilian rolls it in her blood and then places it in the effigy’s lap with the words, “For skill in the discipline of defense.”

For the third coin, she voices, “For skill in the discipline of avoidance.”

The final coin is anointed. “For Adelaide’s will and voice.”

Stepping back, facing the statue, Lilian carefully cleans the thorn before sheathing it and bowing a final time.

The alcove keeper comes forward to collect the cloth used to clean the thorn and place it on the sacred flame. Returning, the prelate binds Lilian’s hand. “By your own will, you are Adelaide’s to command. Listen to her voice.”

As they leave, Chrys cannot contain himself. “Were you truly sitting in the lap of the statue playing with that grisly belt?”

“They are stuffed leather balls, not shrunken heads, and I was but four.”

“She was singing the Warriors’ Litany, as well,” her sister puts in, thrilled to have something to contribute.

Chrys offers a teasing grin. “Were you truly?”

“So, the alcove attendants attested. I do not recall the matter,” Lilian says dismissively. She lacks not reverence. She is far too pragmatic to give much credence to the shrines’ obsession with unsubstantiated manifestations.

“It is no wonder that they dedicated you immediately. Perhaps the Warleader did summon you. Certainly, it is well that your patron force is known for extended combat.” For all his teasing, Chrys is serious. Considering his friend’s trial, a deity renowned for endurance is a positive.

The Twelve Systems Chronicles have won numerous awards: three Paranormal Guild Reviewers’ Choice Awards, five RONE Finalists, and Shield Bearer received the 2021 RONE for Science Fiction. All ten volumes are available in both e-book and paperback, with the e-book available on multiple platforms.

WHERE DUTY AND PASSION COLLIDE