If you're tuning in this week to read one of the final episodes of The Star and the Shell, welcome! Thanks for following the story as it has unfolded over the last few months.

If you're just finding it for the first time, you can catch up on all the parts posted to date at this link:

The Shell and the Star

This time we join Jinn as she faces the near certainty of death -- both her own and Trey's -- in the coming hours. Is there any chance the inevitable can be averted?

From the couch in her bubble, Jinn watched the first glow of dawn seep across the horizon in a thin line of pinks and reds. Like blood in the water, she thought. And shivered in fear that that’s exactly what this day would bring.

The blood of the man she loved.

What chance would an unarmed Trey have against his spear-wielding brother?

How would she bear the inevitable outcome?

She wouldn’t have to bear it for long, because she’d be joining Trey in the Deep, soon after. She felt no fear. Only terrible sadness. Only sorrow that a future with Trey would be lost to her. That the outcome of this challenge may lead to the death of the Perling she loved.

Overhead, the stars sparkled in a black velvet sky—a sky that would soon gradient to gray and then the blue of day. She leaned back in her couch, staring up through the open hatch at the great dome of the heavens stretched over Trey’s world. Was her father looking down from those heights, even now? Did he miss her? Would he mourn her when she was gone? Would any feel the grief of her passing who lived in her world?

No, not her world, she reminded herself. Not any longer. She had no world now. 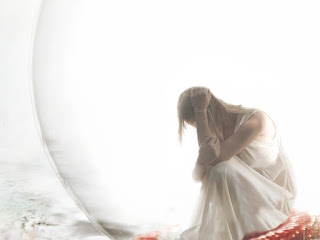 Her envirosphere was once more parked and powered down in the tiny rock-lined lagoon at the surface above Trey’s Garden. Even had the invitation been extended—and it certainly was not—she had no desire to spend the night inside the walls of the Imperator’s estate nor the will to climb the steep, narrow path to the comfort of Trey’s shelter. This was where she belonged this fateful night.

Living with her fear, her sadness, her regret and her helplessness.

Trey couldn’t come to her in the night to share their last private words, even if she wished it so, even if it’s what he desired. His father had no choice but to see to it he was sequestered until the moment of the death dual with his brother. No, the Perling Imperator would not allow his challenged son either to speak with her or to slip away to his mysterious refuge where no Perling could find him.

As if he didn’t realize Trey would never do that.

As if he didn’t know the depth of his own son’s honor.

She started and levered her elbow against the armrests when she heard a tap on the bottom surface of her bubble. Trey? Was it possible he’d found a way to see her, after all?

Or was this a more sinister visitor?

The Perling that rose from the blackness of the night waters wasn’t Trey.

Jinn blinked and stared. The woman swept dark scarlet hair from her face with her handfins and her throat moved.

“I thought I might find you here,” the translator said.

Jinn slumped lower in her couch. “Why were you looking, Eldelza?”

“I couldn’t sleep. My heart is too heavy. I thought we might…talk?”

“What more do we have to say?”

“You need to understand we share the same fears. Trey is my friend.”

“And Tardem being Tardem never made his feelings for you known, so the Imperator had no clue what he was setting in motion by conspiring with your father for a beneficial bond between you and Trey.”

“So now Trey will fight his brother empty-handed.”

“Tardem doesn’t wish to fight Trey. His temper got the better of him when he heard of Trey’s bid for my hand. He regrets making his challenge, especially after hearing all the sides to the story, but he cannot retract it or he will be the outcast. If only…” Eldelza voice trailed off in a downbeat of futility.

“I have a few if-onlys of my own to bear,” Jinn admitted, running her finger along the surface of her console.

“If only your words hadn’t been spoken before the sentinels, you and Trey could have talked it through?”

“And if only the Imperator hadn’t been left with no quarter but to immediately expel you from Fourth City and make immediate actions to save his son’s status, there would have been no hastily arranged bid that has brought us all to this.”

“Why must your elders be so inflexible about a simple misunderstanding between Trey and myself?”

“This I can tell you.” Eldelza looked up at the glittering constellations. “Long ago, when the Perling first came to this world, life was very hard. When things got desperate, some began to pillage or raid their neighbors to acquire food and precious resources they needed to survive. All respect for authority was lost, lawlessness prevailed, and our people could no longer protect themselves from those who formed large schools to prey on their own kind. Four of our five colonies were abandoned and only Fourth city remained. The survival of the Perling hung in the balance.

So the leaders created the Law of the Shell to restore order to bring our world back from the brink of self-destruction. Only stringent order is what allowed the Perling to survive here. And since that time, the law has always been kept in the strictest covenant.”

She looked Jinn’s way. “This is why the Elders have ruled as they have, and why the Imperator must obey their decision. The people look to their leaders to maintain order, and if the Imperator allows his own sons to live outside the law—even in a small way—then he will break this covenant with his people and fail as their principal.”

“And the Law of the Shell is more important to him than the lives of one or both of his sons?”

“In his eyes, the laws must apply to all equally. Perhaps especially to his children, since his heir must possess the qualities to one day succeed him.”

“Then there’s no hope that this blood duel can be averted?”

“Sadly, we know from our past,” Eldelza replied softly, “that hope has never been a sound strategy.”

Both Jinn and Eldelza feel helpless to change what is to come. The strict Law of the Shell has locked both Trey and Jinn into a terrible fate, and chances are they'll both be dead before the sun sets.

As Eldelza declared, hope may not be a sound strategy, but sometimes it's all we have.

I hope you'll stop back next Monday for the next episode of The Shell and the Star.

Only four more parts to go!