Creatures from another world

If I think it's hard to find suitable human stock photos for my book covers, that's nothing when compared to finding pictures of aliens. If the alien is basically a human with a few small changes, that can be done in Photoshop. A good example is Admiral Ravindra. His people, the Manesai, have far better eyesight than Humans and their eyes look a bit like a cat's. Which is what I did with this image. 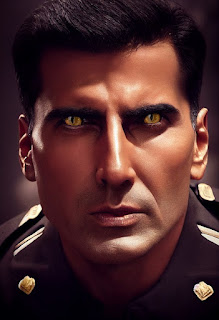 If it was going to be good at anything, I figured Midjourney would be good at aliens – real aliens that originated on their own distant planets. 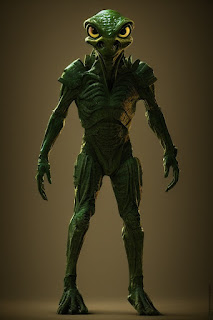 But when it came to a totally non-humanoid alien, MJ was waaaay out of its depth. I spent hours trying to come up with a convincing Ptorix but a being without a neck was out of its league. Here's a description I wrote years back.

They are essentially conical in shape, something they exaggerate with their clothing. They have no neck and the head ends in a dome. The body is covered in short blue fur. Their four arms end in a number of tentacles which can be deployed in a variety of ways. Think of a sea anemone and you've about got it right. They have four short legs but these are usually hidden beneath their robes. Three eyes which change color according to mood are located almost equidistant around the top of the head, enabling a Ptorix to see almost the whole way around its body without moving. They have two 'mouths', one – resembling a proboscis – for eating, the other for breathing and speaking. So from a human viewpoint, they're pretty weird. 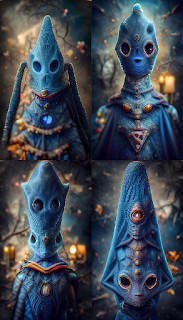 Including four arms with tentacles instead of fingers was not in the ball park at all. I kept trying to simplify to get some sort of result.In the end I gave up on getting a full body image. These are the best head shots.

I ended up settling for the humanoid version because it looks aggressive and it includes curves and ornate decoration which is characteristic of the Ptorix.

To be honest, something like MJ would have been great back when I created the Ptorix. I think perhaps I wouldn't have been quite so 'out there' with their weirdness after I'd tried to get a likeness. Ah well. It is what it is.

I had much better success with an image of a Berzhan, a sentient being at the core of Crisis at Validor. Here she is. 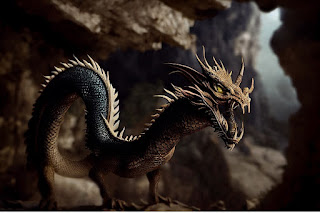 She looks a little bit like a Chinese dragon so I was able to help MJ in finding something that fit.

Next time I decide to create an alien critter for a book, I fully intend to try out my ideas with something like Midjourney. It will definitely help me come up with something convincing - and help when I need to write descriptive passages, too.

At the moment I'm creating pictures as I plot. So far it's the easy stuff - the island where there's archaeological remains of an ancient Yrmak presence and some pictures of loot. Who knows? I'm might have a new book out, probably next year.