Now that I've wrapped up my aquatic science fiction romance novella, The Shell and the Star (which you can now read in its entirety by clicking the link), I'm moving on to my next planned release. Here's a bit of background for the excerpt included below.
We tend to think of those who work in space as "astronauts," but that term (rooted in the Greek words for “star” and “sailor”) generally is only assigned to those from the United States, Europe, Canada, and Japan.
Russia calls its space explorers "cosmonauts" (from the Greek for “universe” and “sailor”).
But did you know we refer to Chinese astronauts as “taikonaut,” which combines the Chinese word for “space” and the Greek for “sailor.”
Except that term isn't used in China. They call their spacefarers yuhangyuan, which is derived from words for “space” and “traveler.”
Star Sailor. Universe Sailor. Space Sailor. Space Traveler. They're all pretty poetic terms.
Venturing into my fictional universe, The Inherited Stars Universe, those who travel in spaceships are first called Ta'kaar or Voyagers of the Vortex. The term for a single traveler is Ta'kar. They aren't exactly space explorers, since their path only leads to, through and out of a stabilized wormhole. The Vortex --also known as "a crossrip in time and space" -- was discovered and exploited as a deep space conduit by their ancient and much more advanced forebearers.
But they don't venture beyond its immediate vicinity for the first 13,000 calendars or so of their civilization's existence. (Calendar is the term they use for a standardized year, since the term "year" is strictly an Earthly term tied directly to our single planet's orbit.) They have no need or desire to explore the great beyond.
Then things...change. And those changes lead to the known galaxy you've read about in Inherit the Stars, StarDog and SpyDog.
In my novella, Juggernaut, first released in Pets in Space 5 (and about to be published as an individual book in a slightly longer version) is a prequel to Inherit the Stars, taking place about  five calendars before the anchor novel, but nearly 1,500 calendars after the Draxian trilogy I'm working on now.
In this story, the heroine reveals her controversial beliefs to the hero regarding the planet where they are based to perform their separate missions -- the planet LaGuardia.
Here's a brief excerpt from Juggernaut:
___________________________________ 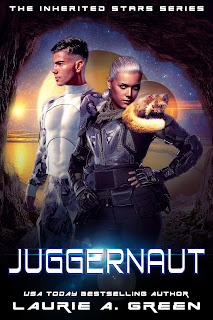 Dek studied his face. He maintained steady eye contact. No nonverbal cues that might suggest he was fabricating the story. He seemed…straightforward. But the truth was, she didn’t know what his motives truly were. Or what he was doing here on Site D. He was an enigma in her orderly life, and she’d never encountered a mystery she hadn’t systematically unraveled. Eventually, she’d get to the bottom of what secrets lurked behind those dark, soulful eyes.
He turned to the door but paused at the exit. “Ask you a question, A-Com?”
“Quid pro quo?” she countered.
“No.” He pursed his lips, shaking his head. “I don’t expect any reciprocation for the intel I provided. I’m just curious about something.”
“That being?” She joined him at the door.
“When I asked if you were Draxian, you said ‘not necessarily.’”
“Actually, it was when you said LaGuardians are Draxians that I answered ‘not necessarily.’ The Alliance insists Draxis never existed. That it’s just a myth.”
His gaze remained locked on her face. “Somehow, I doubt you put much stock in what the Alliance claims.”
“Not when they’re trying to bury the truth about my planet’s past so they can fabricate a history of their own.”
“Right.” He rubbed Cassie’s pointed little ears. “For what it’s worth, I also find the Alliance’s attempt to erase twelve thousand calendars of human experience offensive. Maybe we have more in common than you know.”
Dek opened the seal to her quarters. “I hope you never give me reason to think otherwise.”
He paused to meet her eyes. “That’s my hope, too.”
_________________________________________
As I mentioned in my previous post on conclusion of The Shell and the Star, Juggernaut holds a clue to why the people in Jinn and Trey's time were abandoned by the known galaxy. I hope to have the expanded Juggernaut published yet in 2022.
Have a great week.